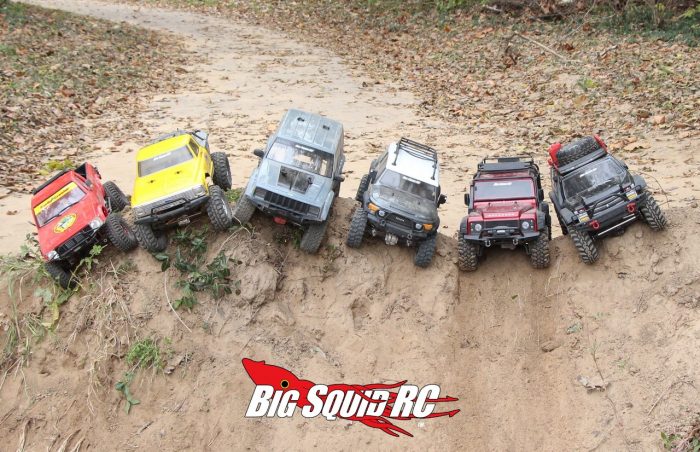 Here we are folks, down to the nitty-gritty, where all the testing gets real – the final results. First we would like to give props to all the companies that participated in the shootout. It isn’t easy for a manufacturer to put one of their
trucks on the line, we hope that all you readers out there recognize that fact, and support the companies that supported the shootout. Hit those links on the main page!

Normally in our shootouts we also have two other categories – durability and parts availability. In our scale crawler shootout, we decided not to include either of these. During the entire shootout none of the trucks “broke”, thus the reason a durability category was not included. Sure, we bashed the trucks, we rammed them into each other, we bound them up in the rocks, and we drove them full speed at a wall (which they tried to climb instead of break), yet still all six trucks are unbroken. As far as parts availability goes, the HPI is not yet shipping in the USA, nor are there any parts for it in the country. To make it fair for everyone, mostly HPI of course, we decided to not include a parts availability category.

We would also like to note that unlike the other shootouts that we’ve done, all six trucks in the shootout were top notch performers. All six performed much better than we expected and all six would make you a proud new owner. There simply was not a “bad” truck in the entire bunch. However, as we always say around the office, there can be only one winner, so here is our final breakdown on how the trucks stacked up to each other. 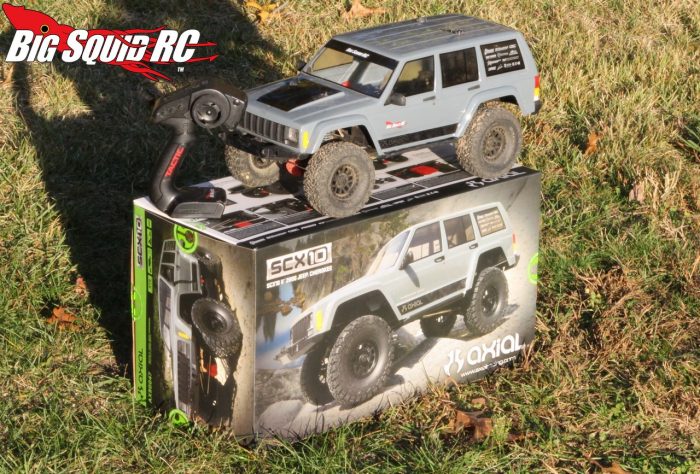 6. Axial Racing SCX10 II Jeep Cherokee, 31 pts – While the Axial may have come in sixth place, it impressed all our drivers. The Axial was highly competent while off-roading, plus it came with the best steering servo of the bunch. The stock servo not only had enough torque to keep the front wheels headed in the right direction, but it was also quick. This allowed the Axial to use pinpoint selection of lines through the rocks, as well as allowing it to precisely make its way through trails. We were also big fans of its stock tires. While not a hardcore rock design, they worked extremely well in a wide variety of surfaces, or at least better than most of the other tires in the shootout. 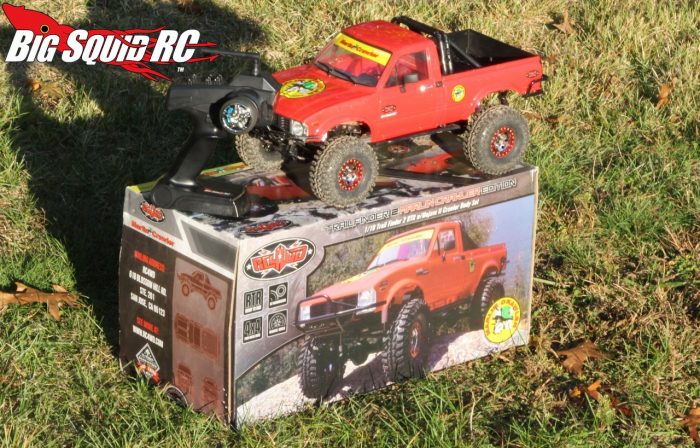 4. Tie – RC4WD Marlin Crawlers TF2 & HPI Venture Toyota FJ Cruiser, 27 pts – Yes, after all that driving, after all the poking and prodding, two trucks got the exact same score. The RC4WD was arguably the highest-end truck of the group. It came with an outrageous amount of metal parts, including some highly sought after upgrades. Its hard body was also quite incredible to look at, while its wheel/tire combo was easily the best of the group. On the downside, the RC4WD seemed to be slightly down on power compared to other trucks. Also, its leaf spring suspension was very trick (and scale authentic), but also held it back slightly in tougher off-road sections. When competing against a group of competitors like the ones we had in the shootout, even the smallest downside can really affect the end results. For the HPI, we were very impressed with its fit and finish. It had perhaps a bit more power than most trucks in the shootout and its tires worked well when rock climbing. On the downside, those tires that worked so well in rocks didn’t do as well in mud, grass or leaves. Also, while the HPI had nice scale detail touches, it didn’t sport a load of scale accessories like the Traxxas or Redcat. 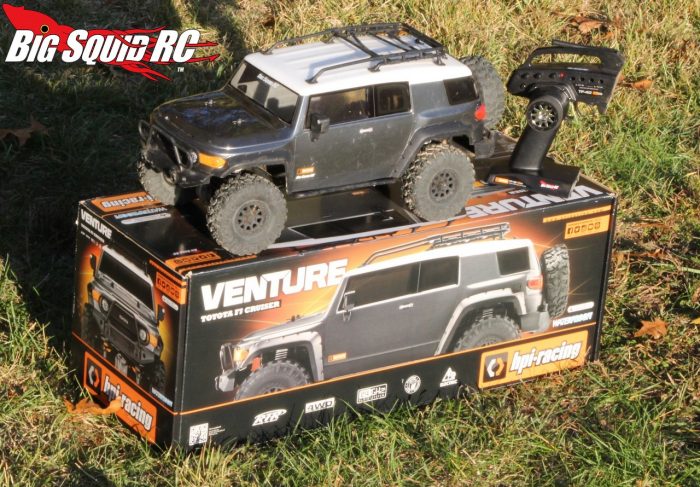 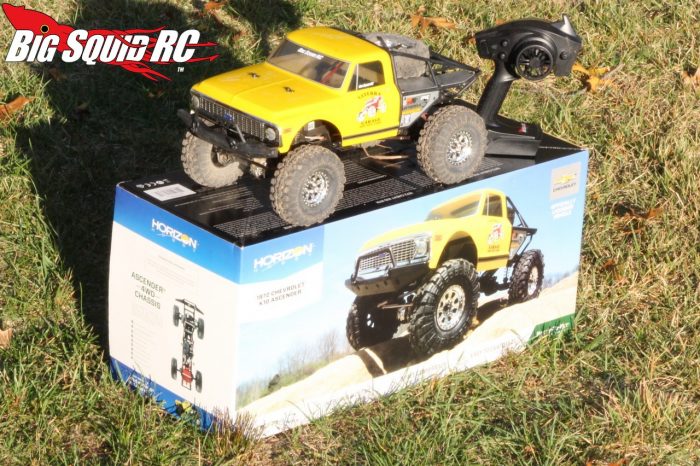 3. Vaterra Ascender 1972 Chevrolet K10, 26 pts – Securing the first spot on the podium is the Vaterra K10. While the other trucks were good in the rocks, the K10 was noticeably better. The K10 was adept at gliding over rock sections that some of the other trucks would struggle on. The Vaterra was also on-point when trail driving. Its chassis and tires did a great job everywhere that we drove. Sporting a small body, there was rarely a need to worry about snagging, better still, that small lightweight body also helped the truck keep a lower center of gravity. This really helped when the approach (or descent) angles started getting extreme. We felt like the truck could have used a tiny bit more raw speed to help keep momentum up when trail driving, but the fix to that is as simple as changing out a pinion. The K10 is a fantastic truck right out of the box, one that has more than enough capabilities for a casual scale enthusiast. 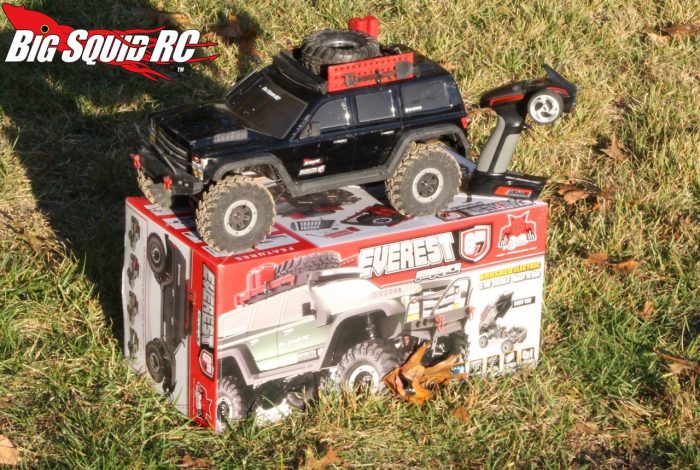 2. Redcat Everest Gen7 Pro, 18 pts – What’s this, a Redcat on the podium? Yes indeed it is, the folks at Redcat have come a long ways in the last few years. Our entire BSRC Bash Crew was surprised the first time we drove the Gen7, but even more so when we got to drive it back-to-back with its direct competition. Nothing ever broke on the truck, in fact it was rock solid during our entire testing period. While not the best at rock crawling or trail driving, it was right among the top of the group. The Gen7 had extremely smooth shocks and was loaded with all sorts of scale accessories. It also had a fantastic body mounting system that required no body clips – just Velcro, a hinge, and a prop rod. Driving on rocks (or trails) with the Redcat showed just how smooth it was, plus it rocked plenty of power under the hood for making it up huge hills. For downsides, there just weren’t many. It was slightly top heavy because of its realistically styled body and its servo was one of the weaker of the bunch. Otherwise, it had a great chassis, decent tires, and was totally up for all the torture that we put it through. 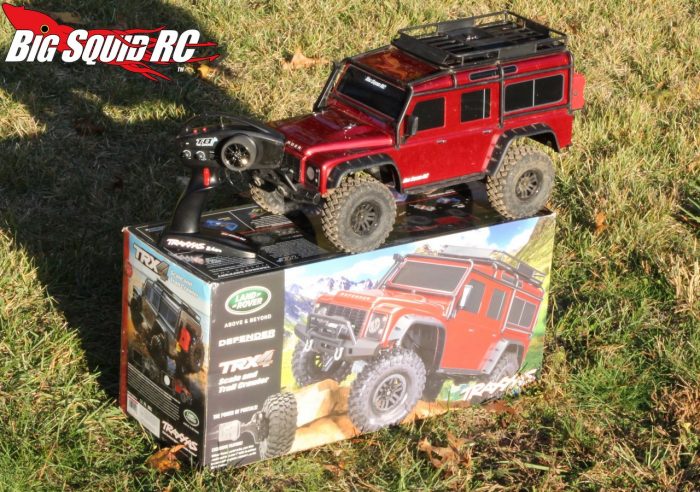 1. Traxxas TRX-4 Land Rover Defender, 13 pts – Who would have thought a year ago that Traxxas would be going out and winning scale crawler shootouts? Well, believe it folks, the TRX-4 is an outstanding truck. We all knew
that Traxxas had a plethora of bashing experience, but when it came time to develop a crawler, they didn’t mess around, the TRX-4 has clever engineering from nose to tail. Traxxas went the extra mile and came up with a gorgeous Land Rover body. Then they incorporated a slew of handy features like a two speed transmission, remote locking differentials, and cruise control. After sprinkling on a bunch of accessories and bolting up some high ground clearance portal axles, Traxxas had produced the TRX-4. How did the Traxxas win the shootout? Well, it ended up winning a total of four out of the seven categories. The TRX-4 took first in transmitter, speed, trail driving, and in features. To boil it down, the Traxxas won because it was a slightly better overall package. It was incredibly capable when rock or trail driving. It had more features than the other trucks. We found that it was not only good in the rocks, but also outstanding in trail driving (thanks to the 2 speed transmission and portals), and could also be used for general backyard bashing. While it wasn’t without its downsides (it could use a more powerful servo, it came with a tall/heavy body), the Traxxas TRX-4 is an outstanding overall truck, and that is exactly what it took to beat all the other great trucks in the shootout.