Pretty sure nobody on the planet but us would do a drop test of the radios in a shootout. Not only did we drop each radio, we dropped them twice! The first was off a pit table height of 2.5 feet. The second was at more of a drivers stand height of 7.6 feet. The radios were randomly knocked off these two locations. 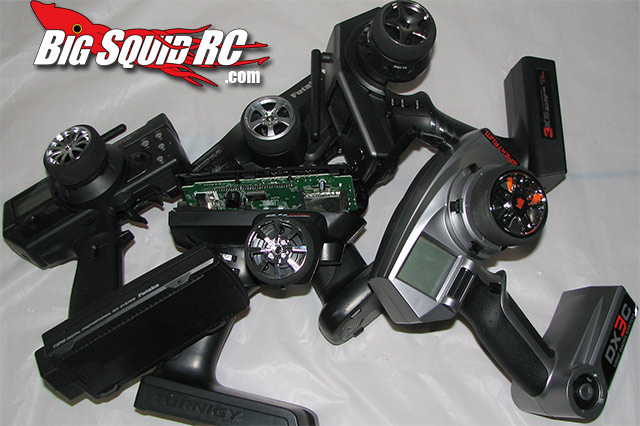 We tested the radio in the vehicle to insure it was working correctly, the radio was then dropped, and we would test the radio again to make sure it continued to work.

Remember, these scores are based on all of our individual scores added together. After the drops we assessed the damage and decided where the radio should rank.

This test was brutal to watch and do. Check out the short video of the drops. We thought Adam was going to shed a tear when we told him he had to do the dirty work on one of the radios. We were expecting him to dive and save it before it hit the ground.

The Futaba 3PRKA appeared to take the least amount of damage after the two drops. We had a blinking light, but the radio continued to work without issue.

The Futaba 3PM-X had the power switch pop off on the small drop, and lost all it’s batteries on the large drop.

The Turnigy 3XS suffered from a weak battery compartment. It’s the only radio that lost it’s batteries on the small drop and the big drop.

Finally the Turnigy GTX3 basically exploded. It cracked in several major places, the entire top part that holds the screen down cracked off, the wires on the inside all disconnected and parts went flying. After putting it all back together, it does still work, but the screen has a crack in it, and the amount of overall damage makes it basically unusable.

Move on to Final Results! or head back to the beginning shootout page.