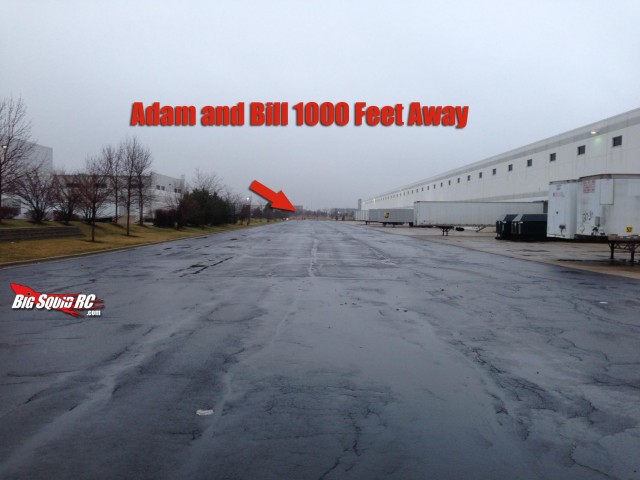 How far can you drive your vehicle with a 2.4GHz Radio? This is actually one of the original subjects that started us down the path of the Transmitter Shootouts. As bashers, we are always out in different locations, looking for that idea place to have fun. We do not necessarily keep our vehicles very close to us. We sometimes have huge open areas, or parking lots, and we love to just go wide open and cruise across at top speeds. We often play tag and are trying to out maneuver our opponents. We also do a lot of rc drag racing. From our own custom drag-purpose vehicles, to whatever we happen to be driving and testing. We also do a lot of high speed runs for testing in reviews.

For this test we used a Traxxas Slash 4×4 with the body on, and the receiver antenna mounted as optimal as possible. We used brand new batteries for all the transmitters. The batteries were installed right before use, so the test of the equipment was as ideal as possible for the radios.

Our test location was a huge new warehouse facility that had an enormous stretch of brand new asphalt.
We installed each radio into the truck, then drove straight down the center of the lot. All radios were tested from identical starting position to make sure it was even for all. As we drove the vehicle away from us, about every 75 feet the driver would do a full circle to prove they still had complete control of the car. A second person walked next to the vehicle to monitor performance, possible twitching, and to be there in case of a runaway.

Just like in golf, the lower the score, the better, but the farther the distance the better! 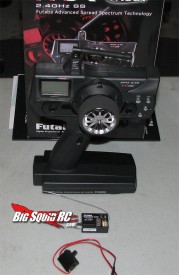 Some interesting notes on all the radios:
Both Futaba radio’s were insane for distance. I’m not sure if you can picture how far 1764 feet is, but it’s so far you can’t see the car, the person next to the car, or much of anything. This is almost 6 football fields away! We were in communications via cell-phone to tell the driver where to go.

The Turnigy radios had decent distance, but when they lost communication things went south quickly. We actually had a run away with the GTX3 where the car went wide open into a curb breaking several parts on our test car causing us to do repairs before we could continue testing.

The Spektrum finished where we expected it to for range. We have never had good distance checks with Spektrum radio’s from the ground. Up on a drivers stand they do a little better, but most bashers are ground based. We also experienced a large amount of lag past the 250 foot mark causing our actions to take a noticeable amount of time before the car would react.

Move on to the Drop Tests or head back to the beginning shootout page.