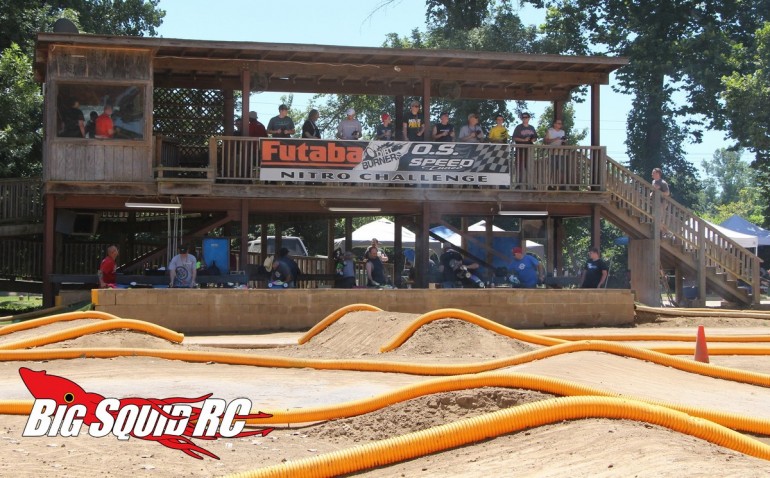 Going on this weekend in St Louis Missouri is the 2015 Futaba Nitro Challenge. Myself and several members of the BigSquidRC Bash Crew made it down to the St Louis Dirtburners track on Friday to check things out and we had a blast. If you are in the area please consider dropping by to see some of the best racers in the entire world battle it out with their 8th scale buggies and truggies.

Some notes that we brought home the track today include-

* Futaba is the title sponsor of the event but many of the lines from Hobbico are well represented at the race. There are a bunch of new Futaba products on display, as well as other Hobbico lines like O.S. Engines, Team Durango, and TrakPower.

* The track has been freshly built by hot shot track designer Levi Jackson. Levi runs SIK Track Designs and all the racers we spoke to were really stoked on the layout. Traction was already high with a nice blue groove going nearly all the way around and everyone seemed to be loving the flow and challenge of the track.

* Big name racers like Ryan Lutz and Josh Wheeler are in attendance. Ryan has been coming on strong as of late, while Josh has been one of the top ten 8th scale nitro drivers in the world since the late 90s. If you want to see for yourself the amazing control and speed that elite drivers like Josh and Ryan can bust out, the Futaba Challenge is a great place to watch them.

* Qualifying is taking place today, while all the mains will be held on Sunday. All the normal 8th scale classes are being raced, but with so many fast drivers coming in for the event, competition will be dog eat dog to make it into the A in pretty much every class.

* The Futaba Challenge is known for having a ton of give away prizes for the racers. Heck, the annual prizes were the main reason that one of the guys we met drives 6 hours each year to attend the event.

* The St Louis Dirtburners are known for running a quality race program and this year’s Futaba race should be no different. The Dirtburners have hosted the ROAR 8th scale off-road nats, as well as a slew of big trophy races over their nearly 30 years of being in their current location. It is quite obvious they take pride in their big events.

Enjoy all the pictures below and come on down and experience the Futaba Challenge in person if you can (located at 2330 Marshall Road in Kirkwood, MO 63122)!