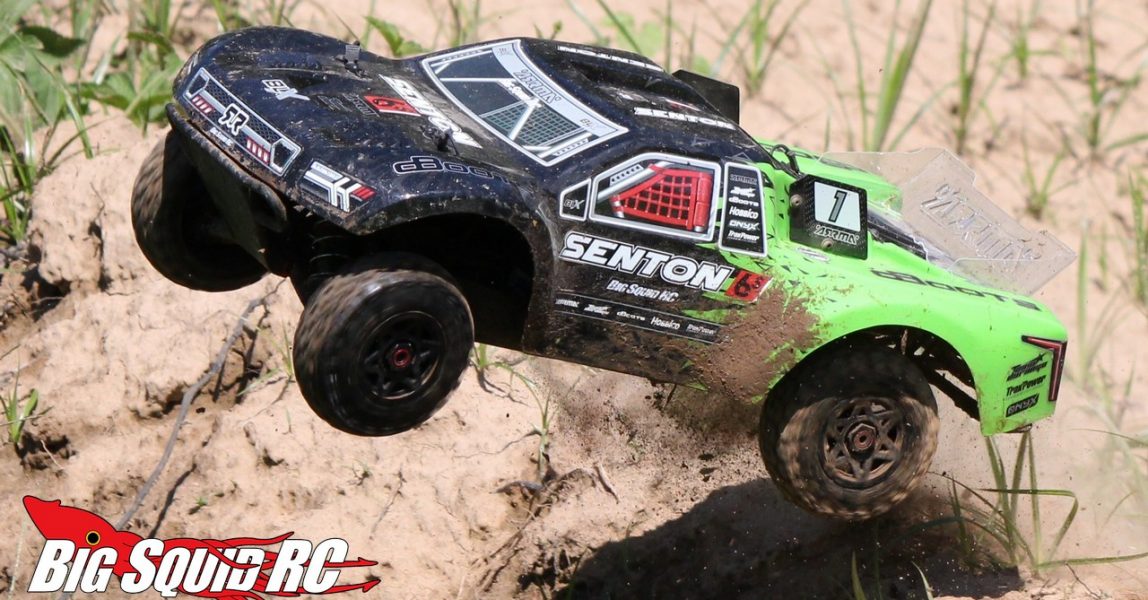 Over the past year, the ARRMA Senton BLX Short Course Truck has really taken off. Bashers love the truck for its power, looks, and for its ability to take a beating and come back for more. For 2016 ARRMA upgraded the Senton with a new power system, new radio gear, and fresh livery. We’ve been beating on the 2016 ARRMA Senton for several weeks now, what did we find out? Keep on reading for our full review…

Primary Competition: There is still plenty in the 4×4 SCT class. You’ve got legendary bashers like the Traxxas Slash 4×4 and the Losi SCTE, plus many others.

What’s Needed To Complete: The Senton comes pre-built and ready to rumble, but it does require that you also buy a battery pack (4 to 6S) for the truck, a battery charger, and 4 AA cells for the transmitter.

Build Quality: We found no build quality issues after closely inspecting the truck. The tires were well glued, the wheel nuts were tight, the gear mesh was properly set, and we didn’t find any loose or stripped screws.

Test Venues: We got a lot of trigger time in with the Senton. For track running we got to drive at St Louis Dirtburners and the RC Outlaws 8th scale tracks. We also got in a lot of driving at the RC Freaks Offroad Park and at Minnie Ha Ha Park. Last but not least, we put in plenty of pavement time at our local Costco parking lot.

Set-up Notes: We made a couple of changes before running the Senton. Stock the battery tray in the Senton is set-up for a pair of 2/3S packs. We moved the battery spacers around to accommodate a normal 4S hardcase pack. Also, the stock battery connectors are XT90s. We made an adapter to run Castle 6.5mm connectors. For power we used a FlightPower 6S 5500 and a MaxAmps 4S 6500. For a battery charger we used a TrakPower VR-1.

Turning: The Senton does well, and is easy to turn, in both narrow and wide corners. For sweepers you let off the gas and use excessive steering to scrub speed, then pound the throttle at the apex. For tight 180s, you slam on the brakes, let the Senton settle, then roll on the throttle at corner apex. If you attempt to jump on the gas too early, the Senton will push, otherwise, the front end sticks well. The rear of the truck mostly freight trains right behind the front, but on more slippery surfaces like dusty hard packed dirt, the rear wanted to slide out at corner entry.

Jumping: No have no major qualms with the way the Senton jumped. On 4S it did tend to jump a bit nose down, but that was not a problem when driven on 6S where the extra rpm could easily level things out. Yes, the suspension is on the soft side for bigger leaps, but the truck’s general suspension geometry and damping allowed it to be a good jumper.

Bumps/Whoops: While the damping on the shocks is in the ballpark, the stock springs, especially the fronts, are slightly too soft. The front shocks required a bunch of pre-load to achieve a barely bones level ride height. This results in the Senton bottoming out too easily when attacking bombed out/rough sections. Sure, it comes on an 1/8th scale platform that has no problem plowing through whoops and braking bumps, but slightly heavier springs would allow the Senton to simply ignore smaller bumps, instead of scrubbing speed by plowing through them. That is not to say the Senton is terrible over rough sections, it is not, it just isn’t as good as some of the other trucks in its category.

On-Road: Hey, we know (and the manufacturers too) that nearly every “off-road only” vehicle eventually gets used on pavement. If you plan on doing some pavement bashing, we found that the Senton did not disappoint, especially on 6S. The Senton has a fairly low ride height, so it rarely traction rolls, but it sure does go fast. Its speed combined with suspension that soaks up pretty much anything you are going to find in a local parking lot results in a truck that is a LOT of fun to drive.

Grass: The Senton gets around quite well in grass. Sure, it does have a center diff, but the tread on the dBoots tires do a fine job of finding traction in grass. Add in some crazy power and you end up with an SCT that can get along just fine in medium to short grass.

Tires: The stock tires are on the hard side, this is great for longevity, but was a bit of a hindrance on high-bite surfaces. The scale inspired tread looks good, but more importantly, does a good job in loose dirt and in loamy conditions. On pavement they tend to slide and squirm a bit, but they do a solid job over a wide variety of surfaces.

Power: Ya know, the ARRMA BLX brushless system just might our favorite for a RTR truck. The ESC ran exceptionally cool and the motor provided not only good top end, but tons of low end power. From a dead stop we didn’t notice any cogging at all, the Senton just leaps (or explodes off when driven on 6S) off the line, then blows through a quite linear power curve. Yes indeed, the Senton is quite fast on 4S, and just plain stupid on 6. You will not be disappointing in the power output of the Senton’s BLX system, even if you are a seasoned rc veteran.

Radio: We are generally fans of the Tactic TTX300. It gave us trouble free performance and is exceptionally easy to use. We found the range to be exceptionally good and none of our test drivers complained about its ergonomics.

Broken Parts: Overall, the Senton is extremely tough. We had a few screws fall out of the rear bumper early in our testing, but that did not affect the driveablity of the truck. After some torture testing the Senton just didn’t want to break. Of course we kept pushing until it did, but the Senton impressed us with its ability to take a hit, even a really hard one, and drive away in one piece. At the end of testing we started doing roof jumps and managed to break a front hub, but if you are just into “normal” bashing, you should be able to slam into various objects without too much worry about breaking a part.

Yes, we are huge fans of the new BLX power system. The ESC runs cooler than probably any RTR unit we’ve ever tested. Using 4S on a crazy hot day (101 F), our pro driver guy did our runtime test. Our test driver rarely let off the gas and absolutely drove the Senton like he stole it. Afterwards, the ESC was just slightly warmer than skin temp. The motor was hot, but not overly so, in the same situation. Props to ARRMA on the new power system

The Senton also comes with perhaps the best RTR servo on the market. The included servo has decent speed and more than enough torque to absolutely throw the front wheels of the Senton around.

Speaking of those soft bumpers, the rear might be a bit too soft. During mild bashing we had some screws fall out of the rear bumper, simply because the plastic material they screwed into was too soft.

XT90 connectors come stock and seem more than up to the task of flowing plenty of current. The problem is that there are not a lot of packs pre-wired with XT90s on the market, nor do a lot of shops stock that particular connector. The Senton used to come with Deans, which was much easier to use.

The huge cage that keeps the body from getting crushed adds some weight up high, but we rarely noticed it while driving. The only time we could tell there was some extra weight up top was in high bite conditions. Btw, the cage is easily removed when it comes time to wrench, very nice.

The stock body clips are attached to the body via rubber straps. Can you say no more lost body clips?

Just a heads up to potential buyers, the Senton uses 17mm wheel hexes. What this means is that most standard SCT wheels will not fit. This really isn’t a huge deal as SCT wheels with 17mm hexes can be readily found on-line, just not in most local hobby shops.

Best Mods: So… if we were given free reign to start throwing on some mods, this what we would do. Stiffer springs would be first on the list. The stock servo and brushless power system rock, so they would definitely be left alone. We would definitely order some stock wheels and glue up some Pro-Line Badlands for more traction. The rest of the truck is pretty solid, but if we had some cash left over we would probably ditch the stock Tactic in favor of a Futaba 4PX, just because the Senton is so good that it deserves a high-end transmitter.

Time To Bash: B We had no issues getting the Senton up and going in a hurry. Pop 4 AA cells into the transmitter, charge up a 4-6S LiPo, go destroy your local bash spot.

Workability: B Yes, yes and more yes, the Senton has a standard 8th scale layout that is super easy to spin wrenches on.

Car Show Rating: B Both the stock wheels and tires have a nice scale design, while its body has an attractive shape with a sharp paint scheme. All of our review drivers thought the Senton looked sharp on the pit table and while out bashing.

Bash-A-Bility: B If you really want to boil down what the Senton is, I think Iron Mike said it best, “The Senton is the tank of the 4wd SCT class.”. The Senton has the DNA of a tough 8th scale buggy with huge bumpers to soak up all sorts of nasty. The harder you bash, the higher the Senton should be on your buying list.

Fun Factor: A For pure bashing we think the Senton is the most fun 4wd SCT that you can buy. Its stock power system is insane on 6S and the truck rarely breaks. That combination kept our test crew smiling, more so than other trucks in its product category.

Handling: C Overly soft shock springs bring bring down the Senton’s handling score. Oh and no, the Senton doesn’t handle badly, but there are at least 2 trucks in its class (most notably the Losi TEN-SCTE) that handle better.

Value: A Compared to the pricing of other trucks in its class, we think the Senton sports superior value. The 2016 version is nearly a hundred dollars cheaper than the previous model, yet sports superior performance. That is a great value in our eyes.

Parts Availability: C Yes, we get tired of putting a “C” in for pretty much every brand that isn’t a Traxxas. But it is true, parts availability for the Senton is average. While more hobby shops stock ARRMA parts every day, you still won’t find that many on local shelves. However, when you do break, Senton parts are easily found on-line.

BigSquid Rating: B+ For pure backyard bashing, the ARRMA Senton is the best 4wd SCT that money can buy. It is exceptionally tough and has the over-the-top power that hardcore bashers are looking for. Better still, the 2016 version of the Senton is better than last year’s model, mainly thanks to its updated power system. If you want crazy fast power with the ability to slam the truck around and not break, the ARRMA Senton is a fantastic truck.