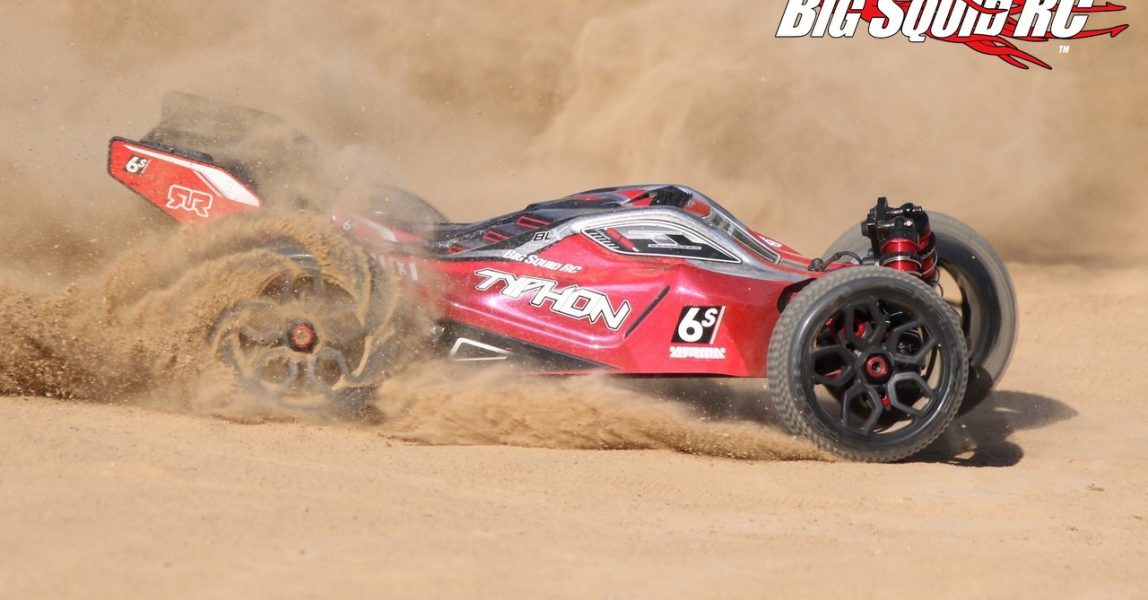 When first introduced last year, the ARRMA Typhon BLX 1/8 Buggy was a hit with the bashing crowd. It had a 6S capable power system, long travel suspension, and a high-tech look. Not one’s to rest on their laurels, ARRMA has upgraded the Typhon for 2016. The Typhon now comes with a Tactic radio system, new wheels, a new rear wing mount, and a new power system. Is the 2016 version of the Typhon a true upgrade over the older unit? How fast is the new power system? Can it still bash like a champ? Scroll on down to find out…

Primary Competition: There is loads of stiff competition in the 8th scale buggy class. Some of the primary contenders include the ECX Revenge Type E, Associated RC8.2e RTR, Losi 8IGHT-E RTR, and the HPI Vorza.

What’s Needed To Complete: Not much. You’ll need a 4-6S LiPo battery with XT90 connectors to run the buggy, a charger, and four AA cells for the transmitter.

Build Quality: After a close inspection we didn’t find any stripped or loose screws, the gear mesh was right in the ballpark, the shocks were properly filled and not leaking, even the servo saver was well set. The only thing we noticed was that the ride height was set exceptionally low out of the box (more on that later).

Set-up Notes: We ran the Typhon mostly stock, but did crank down on the springs to achieve a nearly bones level ride height and ended up ditching the stock XT90 connector in favor of Castle 6.5mm units. For batteries, we used a MaxAmps 4S 6500 and a FlightPower 6S 5500. Charging duties were handled by one of our favorite chargers, a TrakPower VR-1.

Turning: We ran our battery packs in the far forward position and found the Typhon to have a lot of steering. The front would only push on very slick surfaces, otherwise it stuck exactly where pointed. The rear did tend to slide around a bit, acting as if it was slightly down on side-bite. Overall, the Typhon was easy to go fast with in the corners. You could go flying into a corner, tap the brakes to scrub speed and set up the buggy, point the front wheels exactly where you wanted them to go, then either pound the throttle and steer a bit with the rear, or roll on the throttle at the corner apex and let the rear freight-train the front tires at the edge of cohesion.

Jumping: When hitting jumps at speed on 4S, we found the Typhon tended to jump with its nose a bit low. If you were still gaining speed up the face it could be jumped level or even nose high, but if you hit the face already pinned, the nose would tend to dip and it just didn’t have the rpm to bring it up. On 6S, there was plenty of rip on tap, making the buggy easy to level out regardless of how low, or high, the nose was. As far as the suspension goes, it did a nice job of handling landings on “normal” sized jumps, but was a bit on the soft side for skyshot landings. The suspension also did a fair job of ignoring ruts and bumps on jump faces.

Bumps/Whoops: Out of the box, the Typhon has relatively heavy damping in its shocks and is slightly under sprung. This yields a suspension that packs a bit too much in the whoops. With that said, the Typhon can still hit a rough section at speed and pound right through. While not the best in its class over potholes, ruts, and braking bumps, the Typhon still does a fine job.

On-Road: The Typhon is a straight up animal on the street. It can traction roll when turning at speed, but doesn’t do it nearly as much as a monster truck would, or even other 8th scale buggies. Pop in a 6S pack and let’er rip, the Typhon is a blast on pavement. It has a ton of power and generally handles quite well when ripping around the street.

Grass: Compared to other 8th scale buggies, the Typhon did just fine in short to medium length grass. No, it won’t go through grass like its bigger cousin the Nero, but with its big power and 4wd, it got through shorter grass without issue.

Tires: The dBoots tires did a fine job while on the racetrack. On hard packed dirt they gave excellent forward bite and didn’t wear too quickly. They also did a decent job on pavement, although they wore much more quickly. The stock tires weren’t well suited to grass and loamy dirt, but still got the buggy going in a reasonable manner.

Power: One of the new upgrades on the 2016 Typhon is its speedo and motor. Is the new Typhon more powerful than the old model? Yes indeed it is, noticeably so. No, it isn’t geared a lot taller, in fact it tops out about the same speed, but the larger motor has a lot more torque available at all rpm ranges. The extra torque is just as noticeable from a dead stop as it is when stabbing the throttle when rolling around at 30 mph. The extra torque also came in handy when powering out of corners, making it easy to absolutely rocket away from an apex. Oh ya, the extra rip also makes it easy to over-jump short run doubles. When run on 4S the new Typhon proved to have more than enough power on tap, when run on 6S, its power level was just plain stupid.

Radio: We are generally fans of the Tactic TTX300. We experienced no glitching, it had more range than we could use, and it felt good in a wide variety of hands. The Tactic is extremely light and it runs for a long time on a cheap set of AA batteries.

Broken Parts: We experienced none of the issues with the 2016 Typhon that we had on the previous version. The electronics were rock solid, the wheels/tires held up extremely well, and we didn’t break any major plastic parts. After roughly a dozen packs of our normal driving we stepped up the stupid factor and still didn’t bust any parts. Later, we did end up ripping a pillow ball out of a front hub when landing sideways into a rut on an 8th scale off-road track, but overall the new Typhon proved quite durable.

As mentioned earlier, the stock ride height comes quite low, like with the bones well below level. This is done to keep the buggy from traction rolling on pavement and grass, but is less than optimal for off-road driving or jumping. Both front and rear springs are a bit on the soft side, which is good for finding grip on slippery surfaces, but the front springs are so soft that we barely acheived bones level with the threaded collars all the way down. If you plan on doing heavy bashing, plan on installing some heavier springs.

We were very impressed with the new speedo and motor. The speedo ran extremely cool. For example, on a 100 F day, our pro driver guy drove the Typhon like he stole it on 4S and the ESC was didn’t break 120 degrees. The motor ran somewhat hotter, but still cooler than expected.

Speaking of electronics, the Typhon yet again comes with the famous ARRMA ADS-15M. If you haven’t heard of it, we often refer to it as “the World’s best RTR servo” around the office. Torque is over 200 oz and it turns fast enough to never be noticed. Big props to ARRMA for putting a truly decent servo that won’t need replacing into the Typhon.

Oh and, the Typhon once again comes with an aluminum servo steering arm. Very, very nice!

While the previous version of the Typhon came with Deans type battery plugs, the new version comes with XT90s. Hey, if you’ve got a few packs around the garage with XT90 connectors already installed, you are dialed. If not, they can be a hassle. On the good side of things, the ARRMA comes with a spare pair of connectors in the box to help you convert over.

If you owned one of the original Typhons, then you already know that the rear wing mount was prone to breakage. The new Typhon comes with an upgraded wing mount, ours is still in one piece after plenty of abuse.

The battery tray comes set-up to be used with a pair of 2S (or small 3S) packs in series. We used single 4S and 6S packs. This required moving a couple of the battery spacers to properly accommodate our packs. Not a big deal but did take a couple of minutes to switch over.

Time To Bash: B The Typhon is really simple to go from the box to the bash spot. Pop in four AA batteries and a fully charged 4-6S LiPo and you are ready to jam.

Workability: B The Typhon uses a standard 8th scale buggy layout which is extremely easy to wrench on. Everything is out in the open and easily accessible, when you have to do some wrenching it is as about as easy as it gets.

Bash-A-Bility: B The 2016 Typhon is even more durable than the original. Our test unit was driven hard and put away wet with very little breakage.

Fun Factor: A Our Bash Crew was constantly arguing over who got the controller next, and why not, wheeling the Typhon on 6S (or even just 4) was crazy fun. It has warp speed power and rarely breaks, perfect for bashing.

Handling: B While not the best handling buggy in its class, the Typhon still does a fine job. It corners very well and is a great jumper when driven on 6S.

Value: B Our Bash Crew feels that you get a whole lot of bang-for-the-buck at $429 for the RTR Typhon.

Parts Availability: C Not as strong as Traxxas, but we are seeing more ARRMA parts in hobby shops every day. Also, because the Typhon has been out for a while now, there is already a good supply of parts available on-line.

BigSquid Rating: B Without a doubt, the 2016 ARRMA Typhon BLX is an improvement over the previous version. It has more yank behind the throttle and is more durable. It is also arguably the best “bashing” oriented 1/8th scale buggy on the market. It is a tire destroying beast on 6S that can get the heart rate jumping with a single squirt of the throttle. Yes, we liked it a LOT, pick one up if you are in the market for a burly 8th scaled buggy.