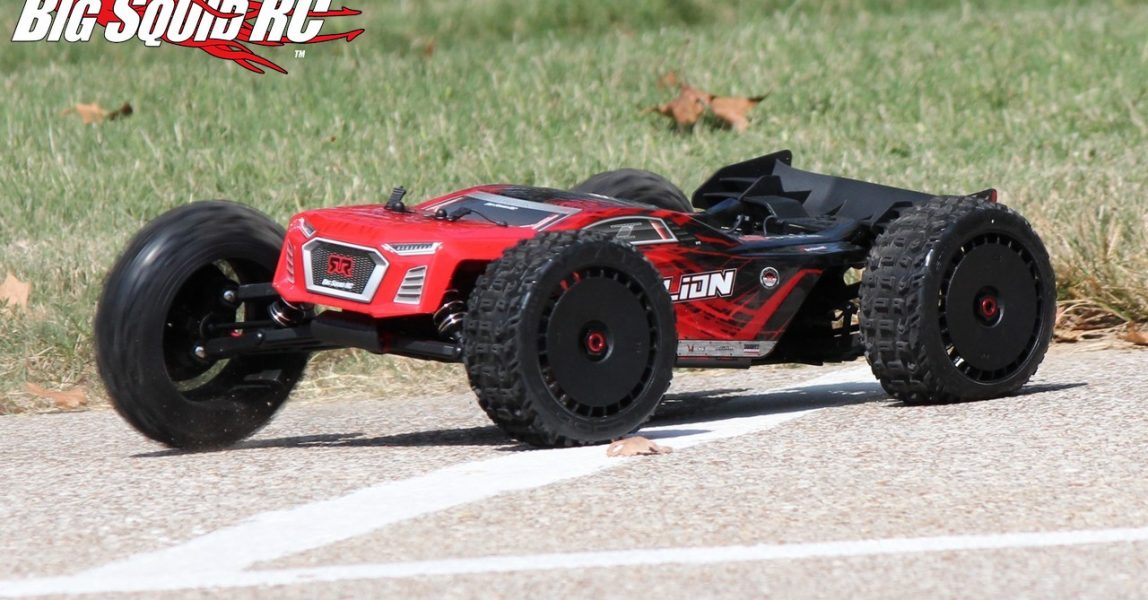 Always looking to improve, ARRMA made a bunch of updates to the 2018 edition of the Talion BLX Truggy. The ’18 gets a lower new body, a lower wing mount, lower towers, new wheels/tires, as well as some beefed up plastic parts. The previous edition of the Talion was well known for being an epic bash machine, is the 2018 even better? You know the drill, keep on reading to find out…

Primary Competition: Other 1/8th electric truggies like those from Losi, Associated, etc.

What’s Needed To Complete: You are going to need to supply a 4 to 6S LiPo for the truck, a charger, and four AA cells for the transmitter.

Build Quality: We didn’t find any issues with our test sample. The tires appeared well glued, the wheel nuts were tight, the shocks were well built, and even the gear mesh was spot on.

Test Venues: We split our testing time between the 1/8th scale off-road track at St Louis Dirtburners, a couple of local parks, and our neighborhood Costco parking lot.

Set-up Notes: We didn’t change a thing on the Talion. We ran it bone stock, including suspension settings and gearing. For batteries we used a pair of 3S 5400 Duratrax Onyx packs along with four AA MaxAmps cells in the transmitter. Charging duties were handled extremely well by a Duratrax Onyx 260.

Turning: The 2018 version of the Talion is much like previous units in that it has a lot of steering. The front end felt exceptionally well planted all the way through a corner. It didn’t matter if it was a tight 180 or a wide sweeper, the front tires always felt glued to terra firma. The rear was a different story. On surfaces that matched well with the tires (loamy dirt & grass), the rear end also stuck well. On hard packed surfaces, like pavement or hard packed dirt, the rear tended to want to slide around. This was especially noticeable when pounding the throttle at corner apex. The design of the new dBoots Katar tires is excellent for forward bite, but not so good for side bite. The front end is super soft and has a lot of weight on it, so it tends to stick, but the rear can get really loose on the hard pack.

Jumping: While the Talion does a lot of things well, it tends to really excel at jumping. After all, it is a big 1/8th scale truggy, sporting huge power and a center diff. Those are pretty much all the ingredients that you look for before buying a stellar jump machine. On the downside, the suspension is quite soft and its ride height is set fairly low out of the box. This means the truck tended to scrub the chassis more on take-offs and bottom out hard on landings. But the overall way that it handled jumps was excellent. The ’18 Talion tended to jump not only straight, but level, and its BLX power-plant did wonders for correction while mid-air. Some light suspension tuning (firm it up a bit, set ride height to bones level) will help it jump even better.

Bumps/Whoops: Once again, the Talion’s large size helped it absolutely blast through rough terrain with ease. From braking bumps, to rain ruts, to cupped out whoops, the new Talion did a solid job. However, just like in the jumping category, some small tweaks would allow it to be even more of a beast in the rough. Stock, the suspension is set-up to help keep the truck low for speed runs, raising and firming it up will pay big dividends if you only run the truck off-road.

On-Road: Yes, we know the truck was originally designed as an off-roader, but the latest changes are to help make it better on-road. We can say first hand that those changes do help the truck while on pavement. The lower overall stance and new Katar tires made the truck easy to make high speed passes with. If pavement is the only surface that you’ll drive a new truck on, the ’18 Talion is a great choice for you.

Grass: You just read that the ARRMA drove well on-road, does that mean it sucks in grass? Nope, not at all! The Talion also loves to sprint around in grass. The Katar tires provide massive traction on grass and its BLX power system has more than enough power to blast the truck through taller sections. The Talion proved itself to us as a great grass runner.

Tires: When we first cracked the box open, we were hoping that the tires were belted. They are not. Still, they are a low-profile (and low mass) design. They are also made from a slightly harder rubber, so they do expand a bit at speed, but not so much as to make the truck undrivable. We had no problems making full speed passes on 6S. We also found that they provided their best grip on loose surfaces. They stick like Velcro on grass and also do a solid job in loamy topsoil.

Power: The BLX power system is straight up no joke. Low end power is substantial, mid-range power is abundant, and it rips hard on the top end. Being a non-sensored design, we did notice some slight hesitation from a dead stop in certain situations, otherwise, its powerband was quite smooth. If you are looking for crazy brushless power, the Talion will certainly give you that rush.

Radio: A Tactic TTX300 comes along with the truck and did a good job, for a RTR radio, of controlling the truck. The ergonomics worked fine for our group of test drivers and it had tons of range. Also, we experienced no glitching during our test period.

Broken Parts: Part of the big news on the ’18 Talion is that it has a number of new parts that are beefier than those that they replace. Yes, we found the new Talion to be even tougher than previous units. We bashed it hard, then harder, then had to get outright stupid to finally start busting some parts. While our test truck held up even better than expected, we did manage to tweak the chassis on a big roof jump. On another occasion, and we are not sure how, but we broke the front chassis brace at the top plate. We also cased a big giant triple jump that caused the rear center driveshaft to pop out.

Our truck came set with a really low right height. We can see ARRMA doing that for less resistance when doing speed runs, but if you only plan on running your truck off-road you’ll want to adjust the ride height to at least bones level.

The Talion comes with a droop adjustment screw in each a-arm. This is a great (and fast) way of making ride height adjustments while out bashing.

Oh yes, we really like the stock servo. No, it isn’t as good as a high-end Hitec, but it just might be the best RTR servo on the market. It has enough torque to keep those big tires pointed in the right direction and isn’t so slow as to be a nuisance.

The Talion also comes with a metal servo arm. ARRMA has been doing this for a while on their 1/8th scaled machines and we highly approve. Going from a plastic to a metal servo arm is an expected upgrade on nearly any RTR, but you won’t have to spend that cash on the ARRMA.

We had two of the tires (both fronts) come loose from the rims. This was not unexpected as that happens on pretty much every vehicle that we run on 6S.

Yes, the Talion comes with an extra pinion but we didn’t try it. From our testing we were seeing motor temps right at 170 with the stock gearing on 6S. Our ambient temps were high, between 90 to 95F. If you do slap on taller gearing, you’ll need to keep an eye on temps and possibly keep your runs short, depending on how much faster you are geared.

Our Bash Crew really like the new battery tray. It is big, but just like a Transformer, the front plastic section can actually change height to accommodate even larger packs.

We had a screw come loose in the steering rack, you might want to keep an eye on yours.

The top of the front shocks have protective covers. These are all the rage in the bashing world right now as they protect the trick aluminum caps from dirt, debris, or from scraping against the pavement at speed.

Best Mod: We would go with firming up the suspension a bit. Keeping it cheap and easy, we would install heavier shock oil and firmer springs to both ends of the truck.

Time To Bash: B We had no problems getting the Talion up and running. You will need to charge up the battery for the truck, then pop four AAs into the transmitter. The receiver is pre-bound to the transmitter, just like the ESC has been pre-programmed.

Workability: B We did do some wrenching on the ARRMA and were pleased with how easy it was to do. Metric/hex hardware comes standard, and its generously sized chassis gave us plenty of elbow room for spinning wrenches.

Car Show Rating: B Our test crew was divided by the looks of the new ARRMA. Some of the guys loved its ultra-sleek appearance, while others wanted to see more scale detailing.

Bash-A-Bility: B We would have to say that the 2018 version of the Talion just might be ARRMA’s toughest 1/8th truck to date.

Fun Factor: A How can you not like huge power with a chassis capable of putting it all down to pavement? The ARRMA’s BLX brushless power system put an enormous smile on our face and its fully capable chassis kept it there.

Handling: B If the ARRMA came with slightly heavier suspension settings the Talion would have had an “A” in this category. Its chassis and base geometry is top notch.

Value: A Street pricing for the ’18 Talion is $499. After much talking between our test drivers, we felt like you get a huge bang for your buck at that price.

Parts Availability: C The 2018 Talion does share some parts with previous versions and we found those parts easy to buy on-line.

BigSquid Rating: B If you are looking to buy a truck that will give you big brushless power and is a fully capable extreme bash machine, your money will be well spent on the 2018 ARRMA Talion BLX. The tweaks that ARRMA has done to the latest model simply work. We were extremely impressed and can very highly recommend the ’18 Talion to you. Pick one up and go EPIC!