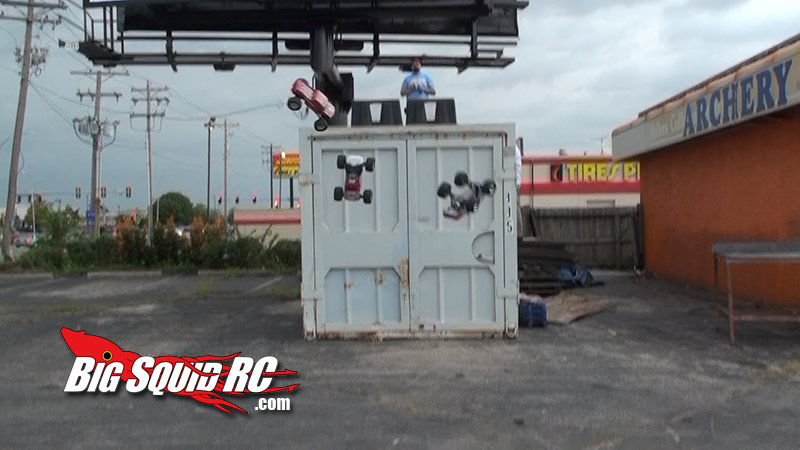 We are BigSquidRC, we are bashers and we know that durability is arguably the highest priority on the list when it comes to buying a new truck.

So how did we test the trucks for durability? First we let the trucks loose with our Bash Crew for generally driving. Our Bash Crew guys literally drove them like they stole them. Next we started jumping all three trucks at each other off of small ramps, a sort of mid-air demo derby if you will. All the trucks survived with very few issues. Next we upped the ante and did our standard “drive them full speed into a cement block wall” test. That is where the Stampede started to falter. Then we threw a couple of ramps on top of a large cargo container and started hucking the trucks off down to the pavement. Finally, it was time for a full speed, no holds barred demolition derby, plus smacking into every solid object we could find. That is when all chaos ensued (and we got a winner!). 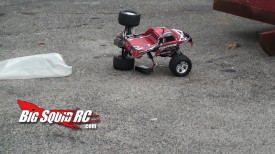 Notes-
Ruckus– Topping the durability test was the Ruckus because it was the last man standing in our battle to the death. At the end of one torture filled shootout the ECX was the only truck still drivable. Missing a wheel and a bit tweaked here and there, but still drivable.

Granite– Without a doubt the Granite is an exceptionally tough bash machine, but on this day it ended up dying before the ECX did, therefore landing it in second place.

Stampede– During “normal” bashing the Stampede proved rock solid, it was only when we took it up a notch did it run into issues. It only took two full speed slams into the cement wall to rip the output shaft off the servo and strip out most of the screws that held the front clip on. One jump off the cargo container caused the entire front clip and body to come off.

Ok, they can take a beating, lets check Ease of Use.