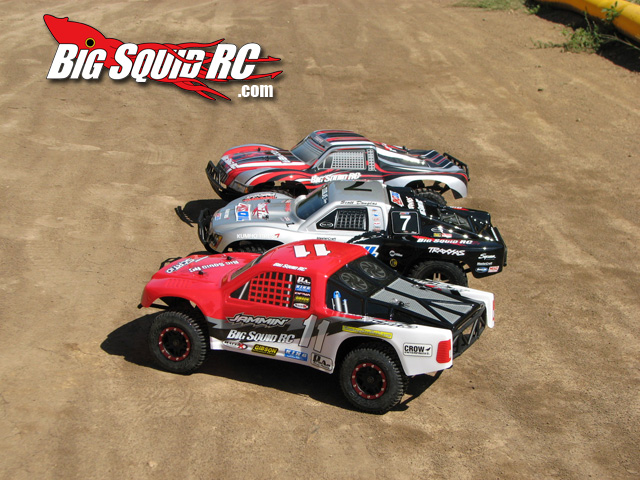 Lots of people drive their bashers on pavement, but lots drive the on dirt, thus the need for our “loose surface driving” category. We gathered up 5 of our bash crew members and set them loose on the Peoria Illinois RiverCity Raceways track and told them to keep driving until they felt satisfied they could rank the trucks. Our guys drove the trucks back to back to back, and the results are based on their opinions on which ones they felt drove best overall on loose surfaces.

The Ofna SCRT-10 is a proven winner on the track, but in bone stock RTR form it was a handful in the dirt. The main issue we came across was the moment you would give it a bit of steering input, the rear of the truck would sway wildly from side to side, making the truck very hard to drive aggressively around the track, or even to go straight for that matter. The Ofna’s suspension soaked up bumps and ruts well enough, but the brushed motor didn’t have enough snap coming out of corners to make some of the jumps the two brushless trucks were easily clearing. The Ofna can obviously be a great truck on dirt, but its stock set-up (and tires) really hold the RTR back.

Because the HobbyKing Trooper came with such hard compound tires we assumed it would be screwed on the dirt, but that was not the case. The stock tires might be quite hard, but they are also quite narrow, resulting in adequate grip around a dirt off road track. The HobbyKing exhibited neutral handling characteristics on pavement, and the same can be said on dirt, it wasn’t an aggressive turner, nor did it push wildly. It’s conservative brushless system was also a factor, it wasn’t really fast enough to get into trouble too quickly, making it easier to drive, albeit at a loss of speed and fun factor. Overall, a fun and easy truck to drive.

The Traxxas Slash 4×4 was voted the best driving truck on loose surfaces by a landslide. The Slash 4×4 had the best steering, best mechanical grip in the corners, floated through the rough, had a rocket for a powerplant, and simply kicked the rest of the fields butts. If you are looking for the best truck to use on dirt, the Traxxas is the one hands down.

Time to catch some air! Lets see how the trucks do in the Jumping Category!