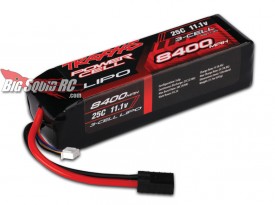 So after our news scoop yesterday, and the follow uppics earlier today, we got our hands on a little more official pic of the new Traxxas Lipo and logo. As you can see here in the pic of the 3S 8400mah Lipo, they are going with the name Power Cell. The batteries are engineered by Traxxas for Traxxas models. They feature hard-wired Traxxas connectors and are equipped with balance plugs. Expect them to have a lipo for every vehicle they make as we saw in the earlier picture, they have a bunch on the way. Since we scooped this story, we don’t have many more details than that. It was not an official Traxxas press release, so we will make sure to get the official details posted as soon as they are released.