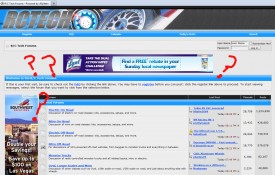 So, I’m not sure when this all went down, or the actual full story behind it, but it looks like RCU and RCTech have worked some sort of joint advertising deal with Internet Brands (ib). They are this huge uber company that’s been buying up tons of other popular website, and then sells advertising to huge companies based on the fact that they own a ton of sites with millions of readers. Now in the grand scheme of things, that’s good for IB. But not so sure how it’s going to work out for the RC advertisers on those sites. You can see the screen shot to the left as an example. Looks like SouthWest and Lysol paid a little more money then our favorite Acer/Nitrohouse/Exotech/Maxamps/Duratrax.. ect people. Are the small RC companies going to have to outbid AmericanExpress for ad space on RCU and RCTech now? Before the little company ads were seen maybe every 30-40 clicks, they have a lot of advertisers.. what’s that number going to now? Again, we don’t know all the details, we have just heard that Internet Brands is involved with both (Their name is now at the bottom of both sites.. did they get bought out?), and ads are a changing.
Brian will probably kill me but… if you are an RC company.. looking to spend some of your $$ on advertising, and NOT having to compete with Lysol, Southwest and all the BIG NAMES and get your ads directly to the RC readers.. drop Brian an email (brian at bigsquidrc dotcom). Tell him I sent ya, (that will really irk him) and that you want a special rate.. lol!
And if anyone has any official info on what went down.. drop me an email Cubby at bigsquidrc.