I finally got my hands on the new LiMn battery packs from Apogee. As far as I know, at the time of this review, Apogee is the only company creating and selling these new packs. If you are thinking about getting into this new technology, hop over to their web page with the link above and place the order now! The packs are starting to sell fast, and the last time I checked, they were on back order!

So what’s the big deal? They are just another new pack right? Wrong! These new packs are Lithium Manganese! (I believe very similar to the now popular LiPo’s). This is the latest and greatest in battery technology, and very well may change the electric RC world as we know it! 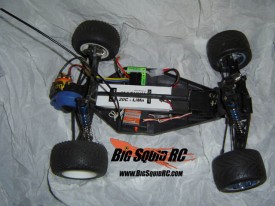 Instead of a 6 cell pack, this pack is created with 2 large cells. (I have heard a 3-cell is in the works) The size of the pack is about the same as a normal 6-cell pack. It was a very snug fit in my RC10 T-3, but it was not a problem getting it in. Something else that is different about these packs is the weight. The Magnum 20C weighs 3 ounces less then a standard pack! 3 Ounces is almost 30%, and I found out first hand that this is a big difference!

For the record, I did all the testing in a RC10 T3. In true basher form, the motor has been pretty neglected for a while, but it was the only electric vehicle I could get up and running quickly. I started off by charging 4 battery packs. Two 3600 NiMh packs, and 2 LiMn. I took everything out the local park, and setup a track. It was basically a large triangle. Two sides were bike paths, and the 3rd was across a grass field. I started my timer and then started running laps with the NiMh packs first. It’s cold here still, so the grass isn’t too thick yet, but was bumpy as all heck, and you could tell the truck was straining on the grass straight. At about the 8 minute mark, I could tell the truck was starting to get sluggish. Just after 9 minutes, the truck had trouble getting to the other end of the grass straight. I swapped the pack for the second NiMh pack and ended with almost identical results. I believe I got about 1 more minute out of it.

I then installed the first LiMn pack. I gave the throttle a few blips to make sure everything was good then gunned it! “Wow!” I believe I actually said that out loud. The truck took off and had the front wheels in the air for about 5 feet! I kept on the throttle, and the truck just hauled down the path. It was like I was running 7 cells instead of a normal 6. I turned around and brought it back towards me. It was cool to see those tires lifting off the ground, which was something I wasn’t really used to with this truck. Sometimes when I gunned it, the truck would get a little squirrelly, and the only way to correct it was to let off the throttle because steering the front tires wasn’t doing me any good at all. I believe the combination of just sheer power coming out of these cells, and that 3 ounce weight loss I talked about earlier, really does the trick.

I started doing laps around my impromptu track, and was amazed at how the truck was now powering its way across the grass section. The front tires bouncing around barely giving me a chance to steer to avoid trees, joggers, dogs, and whatever else was trying to get in the way. At the 9-minute mark, the truck was still hauling! At around the 14-minute mark I started to notice some slowdown, but I still had a good amount of power. At the 18-minute mark, the truck finally had trouble making the grass section. Whew! 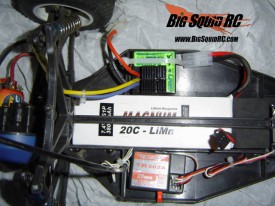 I took a little break, and swapped in the other LiMn pack. A pull of the throttle and I was two wheeling down the path again! There were a few good sized dips that I was using for jumps now and then, mostly when I was staying off the path to avoid pedestrians. Even in the air you could tell the difference that the power and weight make. The truck just glided thru the air.

These batteries are incredible. More power (7.4v instead of the normal 7.2), less weight (8.3 ounces instead of a normal 11.3-12.0), just adds up to great pack. Now remember, greatness comes with a price. That price right now is about $99 a pack. If you are a serious racer, and these batteries are legal for your race, it’s a no brainer. If you are a basher, $99 does buy a bunch of normal 3600 packs, but if you can afford it, the new power and weight reduction means tons of bashing goodness! Like all other Apogee products, they have tons of info and help on their site.

Feel free to discuss this or any other product we have reviewed in the Review Forum.