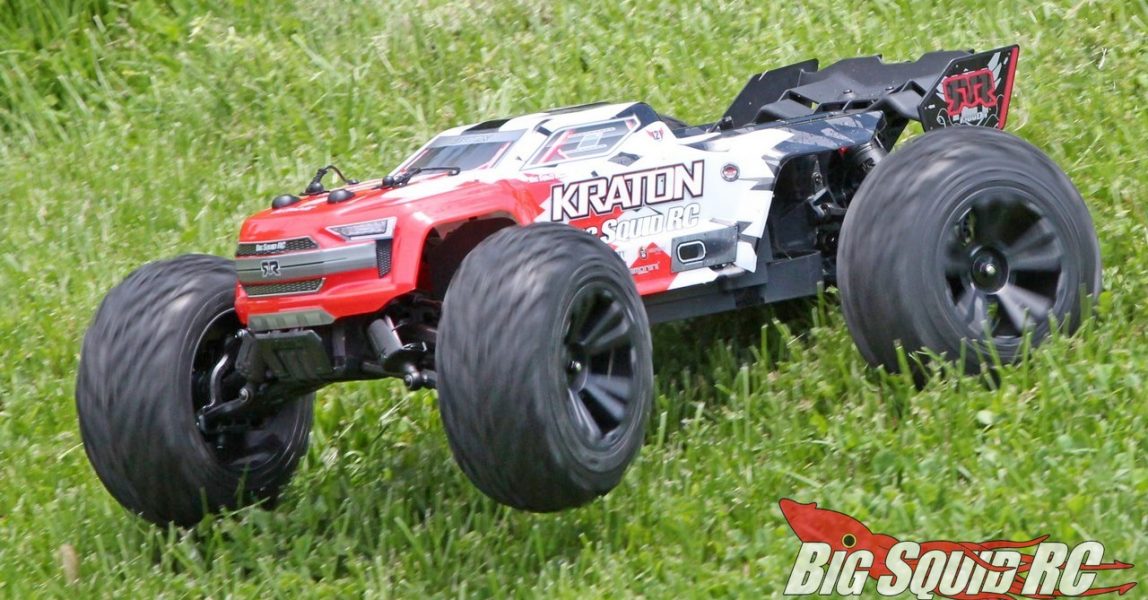 The crew over at ARRMA have taken the bashing world by storm. From the very get-go they have been making products for bashers like we’ve never seen before. One of their latest bash-creations is the 1/10th scaled Kraton 4S BLX RTR Monster Truck. The new 4S version of the Kraton was designed for serious rc fun, while not breaking the bank. Did they succeed? Read on to find out…

What’s Needed To Complete: You won’t need much to get the Kraton up and running. You’ll need four AA cells for the transmitter, then 3S-4S worth of LiPo batteries to power the truck.

Build Quality: Our Bash Crew took a good look at the Kraton and could find no fault with its build quality. The wheels were tight, the pinion/spur mesh was on-point, and we could find no loose or stripped bolts.

Test Venues: With massive flooding going on in our area, our testing venues are few and far between. We ended up using a couple of city parks and our local Costco parking lot to conduct testing.

Set-up Notes: To power the transmitter we popped in four AA cells from MaxAmps, then powered the truck with both 3 and 4S of Dynamite Reaction LiPo power. Charging duties were handled by a Dynamite Passport Ultra Force Duo charger.

How It Drives: Oh yes, we are finally to the important stuff. How does the Kraton drive? The most striking thing that we noticed was that it doesn’t tip-over/traction-roll as much as other monster trucks in corners. While race trucks sit close to the ground for maximum corner speed, most monster trucks sit high up in the air for increased ground clearance. And while it is hard to keep a monster truck from traction rolling all the time, the Kraton uses well tuned suspension, along with harder compound tires, to keep the rubber side down on the road. Now, it does traction roll on certain occasions, but it just didn’t roll over in every corner on pavement like many monster trucks do. The harder compound tires also come in handy by making the truck easy to drift when corning on pavement and helps to reduce initial turn-in at corner entry. This helps to make the truck easy to drive for new hobbyists.

Airtime was a lot of fun with the Kraton as it had crazy power and 4wd. Once off the lip of a jump you could easy mash the throttle for a backflip, or tap the brake just at the lip to induce a front flip. We found the Kraton to be very responsive to trigger inputs while airborne, but not overly so.

When pounding across rough ground, the Kraton did a fine job of absorbing nasty bumps and ruts. While a bit light on compression damping, the springs are in the ballpark for normal bashing. There is a bit of bounce when the going gets really rough and it felt like slightly thicker oil would be an easy fix.

On pavement the Kraton was actually a lot of fun. It is a monster truck, but we had a blast doing wheelies and speed runs with the beast. If pavement is the only choice that you have to drive on, the Kraton will easily keep you smiling.

Tires: The stock kicks are molded from a relatively hard rubber compound. The downside is raw grip, but the upsides are long wear, plus a bit of slide on higher bite surfaces. That small amount of slide helps to keep the truck from traction rolling when cornering on pavement. The stock foam inserts are relatively soft, but not so soft that they are an issue. Overall- they look good and do a solid job for a weekend basher.

Power: Yes, there is a LOT of power on tap with the Kraton. We ended up driving the truck mostly on 3S because of gearing. With stock gearing the truck hauls on 3S with a top speed of over 40 mph. On 4S that number jumps even higher, but the motor temps tend to be a bit on the high side. We mostly ran 3S because the truck still had gnarly power, but the temps on the electronics were more in check.

To help noobs handle the outrageous power output of the Kraton, the programmers put in a very soft low-end. That softness continues into the lower mid-range, then all the power dumps up top. The soft low end takes some practice to pull wheelies, but does make it easier to drive on higher cell counts for noobs. To boil it down, it has a powerband much like a KTM 250 SX-F. The low end is super docile, the mid-range is also quite friendly, but watch out as the power comes on HARD at the top of the mid-range. Oh and yes, there is more than enough power to make big jumps at the track, throw huge rooster tails, and for making speed runs up and down the street.

Radio: The included Spektrum STX2 works fine in this application. While not a high-end radio like the DX5 Rugged aimed at the basher crowd, or the DX6R for the race scene, it gets the job done with no issues.

Broken Parts: Just how tough is the ARRMA? Well, it handled numerous hard hits without issue and handled “general driving” like a champ. So what is “general driving”? We define it as driving like you actually paid for the car and don’t want to take it home in a pile of rubble at the end of the day. We consider making speed runs on pavement “normal” bashing. Hitting jumps where you get a maximum of 5 feet high is “normal” to us. Lots of grass driving is “normal”. Tapping a few curbs at speed when driving on pavement is too. For general driving, the Kraton just didn’t break, so that’s when we took things more extreme.

When we start “extreme bashing”, that means anything is on the table. If we see a building, we’ll jump off it. If we see a huge triple at the local track, it IS getting over-jumped, etc. When we went extreme, which in this case meant trying to make a transfer at a BMX track, we ended up snapping a part. When our driver went for the transfer he came up a couple feet short and broke a front hub. The plastic on the Kraton is fairly durable out of the box, but when falling from 20 feet out of the sky after a 40 foot gap, something has to give somewhere. Overall, if you are a “normal” backyard basher, the Kraton should be quite durable for your day-in/day-out driving.

Best Mod: The first thing that we actually changed was the gearing. For our cell count, ambient temps, and driving style, we ended up dropping two teeth on the pinion for longer runtimes and cooler motor temps.

Time To Bash: B Our Bash Crew found the 4S Kraton to be easy to get up and running. We simply popped four AA cells into the transmitter, then installed a charged LiPo battery into the truck and were off and bashing.

Workability: B The new Kraton uses a nice open layout that leaves some elbow room for wrenching. The stock hex/metric hardware was easy to work with as well.

Car Show Rating B: Like always, the ARRMA livery was stylish and on-point. The same things can be said about the wheel/tire combo which also had a modern basher monster truck look.

Bash-A-Bility: B The ARRMA is no joke when it comes to taking a hit.

Fun Factor: A With huge tires, massive power, and ARRMA attitude, we had hours of fun driving the new Kraton. And we didn’t just have a blast with it hitting big dirt jumps, it was even fun when driven on-road.

Handling: B The Kraton is solid in the handling department. Its set-up makes cornering easy for new hobbyists, yet is serious enough to handle jumps and huge ruts/bumps.

Value: B+ The $399 price point puts the 4S Kraton within the reach of nearly any budget, while giving you some pretty serious bashing performance.

Parts Availability: C After searching various avenues for parts, we found spares on-line, but none at our local hobby shops.

BigSquid Rating: B There aren’t a whole lot of vehicles that we’ve tested that were as fun off-road as they were on-road, but the new 4S Kraton pulls it off. It has the crazy brushless power that you crave and the durability that is needed for serious bashing. The latest Kraton is solid, pick one up and find out how fun it is for yourself, we are big fans.