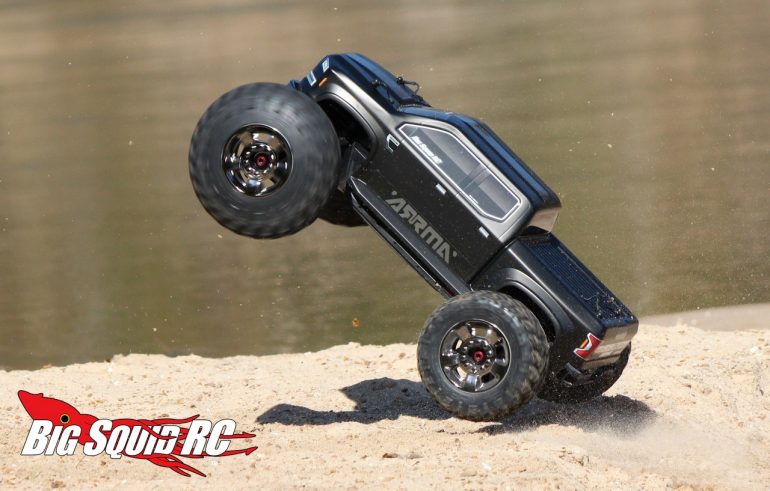 Hot on the heals of the very popular Nero, ARRMA has released the Nero Big Rock Monster Truck. While the Big Rock is very much like the original truck, it sports a scale realistic look, something that is in big demand with today’s consumers. Of course we’ve been driving our test Big Rock like we stole it, so the big question is, should you buy one? Is the Big Rock better than the orginal? Do those fancy smart diffs really help? Keep on reading to find out the scoop…

What’s Needed To Complete: To get the Big Rock up and running you’ll need four AA batteries for the transmitter, a pair of 2 or 3S Lithium packs for the truck, and a battery charger.

Build Quality: Out of the box we could not find anything wrong with our test unit. The gear mesh was spot on, the tires looked well glued, the shocks were filled and not leaking, and we couldn’t find any loose or stripped screws.

Test Drivers: For our review of the Big Rock we enlisted our normal crew of Iron Mike, Robbie G., Sam The Noobie, T-Mohr, and yours truly.

Test Venues: We got the opportunity to drive the Big Rock at an extremely wide variety of venues. We used the St Louis Dirtbuners 8th scale track for various testing, a Costco parking lot to measure top speed, Minnie Ha Ha park in Fenton Missouri for various driving, and Castlewood State park in Ballwin Missouri for general bashing.

Set-up Notes: We didn’t change a thing for our review of the Big Rock, we even left on the stock XT90 connectors. However, we did pop four AA Duratrax cells into the transmitter and used a pair of Duratrax 3S 5400 LiPo packs to power up the beast. Charging duties were handled by a Duratrax 255 dual charger.

Turning: How does the Big Rock turn? We found it turned quite well for a big monster truck. The big theme on the ARRMA is that it doesn’t sway as much in corners as most of its competitors, it tends to stay flatter, which makes it easy to drive in corners while allowing it carry good speed. We also found that the tires on the Big Rock did a better job of finding traction than the previous Nero, which also helped its corner speed. There is a bit of on-power push, but what else would you expect when cracking open the throttle at apex on a 6S monster truck?

Jumping: One of the best things about having remote controlled smart diffs is the ability to jump with the center diff locked, or unlocked. If you are at the track and want a truck that is easy to keep flat in the air, jumping with the center unlocked is the way to go. If you are looking to pull off tricks, like backflips, then locking the center diff was super easy. Overall, we consider the Big Rock to be the best jumping truck in its class. It has loads of power (and brakes) for slight attitude adjustments and its suspension was well sprung and damped for soaking up massive landings.

Bumps/Whoops: Yes indeed, the Big Rock is a beast in the whoop-de-doos. Its large form factor, big tires, and gnarly power system allow it to plow through rough terrain that smaller monster trucks simply wouldn’t hope of making it through. The stock suspension settings typically work well when hitting rough areas at warp 10, although the rear is slightly heavy on the damping, which can result in the rear having an odd kick at times, but overall it can pound the rough with the best of them. Btw, the option to remotely lock all the diffs came in really handy when hitting the roughest of the rough. For example, when down on a beach that was littered with potholes made by footsteps or Mother Nature, we found that locking all the diffs allowed the truck to absolutely scream through rough areas that other big monster trucks would have been slithering through.

On-Road: While the Big Rock was certainly never designed to be driven on-road, we had a blast with it in various parking lots. How could you not have a good time? It has crazy power that gives it great top speed, plus you can remotely lock the center diff if you are wanting to pull wheelies or standing backflips. Yes, the Big Rock can and does traction roll at speed, but if you have a basher mentality, the Big Rock will not fail to keep you entertained when driven on-road.

Grass: Oh yes, once again we are given a good reason to talk about those wonderful smart diffs. While a normal 1/8 monster truck can easily get over most grassy areas, locking up all the diffs on the Big Rock made it even easier. No, the truck wouldn’t turn as well with the diffs locked, but it could chew through grass like no other truck in its class.

Tires: The stock tires are molded from a relatively soft compound and have a scale appeance of sorts. Aside from the tendency to traction roll on pavement, we found them to be solid overall bashing tires. They didn’t show a lot of wear, even on extended pavement driving, and worked exceptioinally well in soft loam.

Power: The Big Rock does not lack for power. The stock BLX 6S system has gnarly yank off the bottom, screams though the mid-range, and seems to pull forever up on top. You’ll actually need a fairly large sized parking lot to use all the power the Big Rock has. The speedo felt a bit notchy from a dead stop, but after that, hold on Martha, the BLX system just kept on putting out serious wattage. Is it overpowered? Perhaps, as you can rarely use all the power that is on tap, but in our book overpowered is a great thing.

Radio: While the included Tactic is nothing fancy, we found that it got the job done. Our testers never really commented about it, which means that there was nothing that truly offended them about it. Range was typical Tactic, really long, and we never experienced any glitches.

Broken Parts: After driving our test truck like we stole it for several weeks, we ended up snapping a pair of rod ends and the stock servo gave up its life. Our test truck saw all sorts of crazy terrain, huge jumps, and questionable drivers, so we considered it quite robust as no truck would have lived what we put it through without breaking a few parts here or there.

The heavy duty driveshafts on the Big Rock proved unbreakable during our test period.

While the original Nero was fun to run without the body, we only drove the Big Rock with the body on for more of a scale appearance.

We liked the body clip retainers used on the Big Rock. If you are “one of those guys” that constantly loses body clips, you’ll like them too.

XT90 connectors come stock. We found that they worked just fine but you may need to solder up some adapters (or solder on other connectors) to work with your current battery packs.

While the battery trays are easy enough to use, the doors can pop open during extreme use and wet sand can be an issue with the release button.

You won’t want to gear your Big Rock any taller than stock if you are running on 6S. We found that the motor got quite hot during extended running. If anything, you might want to drop a tooth or two on the pinion for more controlled power and longer run times.

The stock servo had good power for a RTR unit and was fast enough for normal driving.

Best Mod: Our first planned mod/upgrade for the ARRMA is a T-Bone Racing wheelie bar.

Time To Bash: B There was nothing hard to getting the Big Rock up and jamming. Throw some AAs in the Tactic, charge up a couple of packs, then you are ready to tear up your local bash spot.

Workability: C All the high tech wizardy of the Big Rock is a great thing, but it isn’t as easy to wrench on as some of the other trucks in its class. No, the Big Rock isn’t hard to work on, but it does require a bit more time in some areas.

Car Show Rating: A Yes indeed, we consider the Big Rock to be the best looking truck in its class. ARRMA nailed it on the body, the wheels, and the tires, it is a serious head turner.

Bash-A-Bility: B We did not hold back when bashing the Big Rock, giving it numerous hard beatings. At the end of the test we did break a couple parts, but not many.

Fun Factor: A All of our testers agreed, the big, burly, over powered Big Rock was perhaps the most fun we’ve ever had in a hardcore bashing setting.

Value: B While a $769 price point isn’t cheap, you get a lot of tech and performance for your cash with the ARRMA.

Parts Availability: C The original Nero has been out for a while now making parts easy to find on-line. The Big Rock gets a “C” in this category because not that many local hobby shops stock parts for it on the shelf.

BigSquid Rating: B+ So here’s the scoop on what our test crew really thought about the Big Rock. Besides being a great looking truck, it is the most versatile on the market. While its cousin the ARRMA Kraton has better handling on a track or empty dirt lot, the Big Rock excelled over it when used in a wide variety of bashing conditions. For example, we took our Big Rock on a trail drive where it did quite well. We remotely locked all of its diffs and had a great afternoon of cruising trails at the local park. That is something that most other monster trucks on the market simply could not do. Another example would be when we hit our local mud pit. Where as other MTs would slide and slither along, the Big Rock with all three diffs locked was much easier to drive and could get through much deeper mud. That is what makes the Big Rock arguably the best monster truck that money can buy, the ability to excell in a wide variety of bashing conditions.