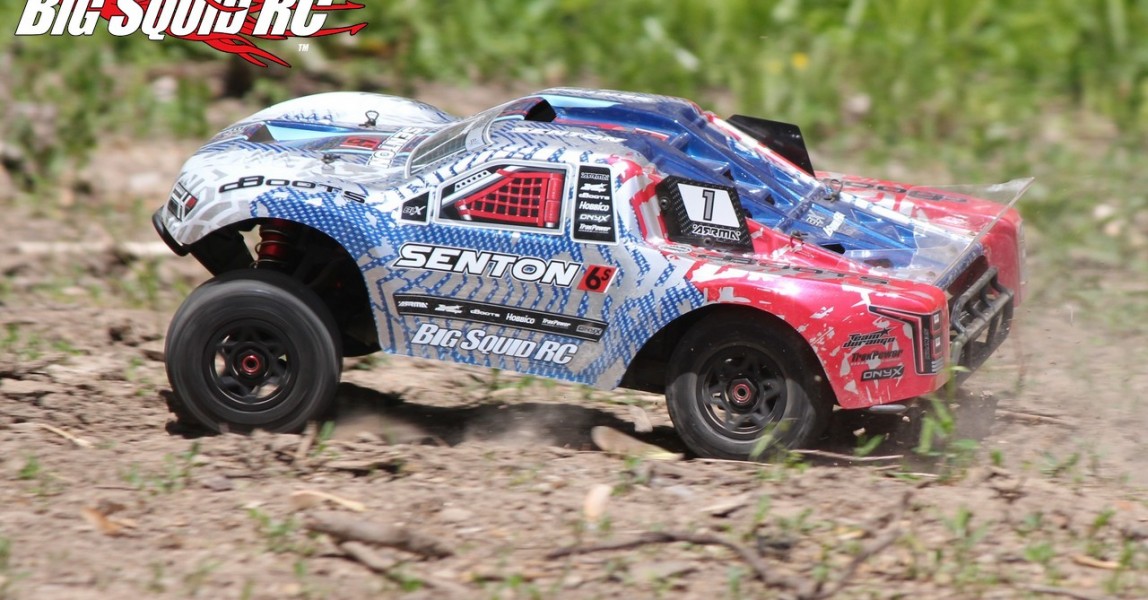 Among the bashing community short course trucks are a favorite, especially 4 wheel drives. They have a great combination of scale looks, toughness, and drivability that are great for bashyard bashing. We’ve had the opportunity to thrash the latest SCT from ARRMA, the 4wd Senton BLX, for several weeks now. Did it live up to the ARRMA name? How does it handle? Does it have enough power to jump over tall buildings? Read on to find out…

What’s Needed To Complete: You will need- a battery charger, a battery for the truck with Dean’s connector, and batteries for the transmitter.

Build Quality: After letting our crack crew meticulously look over the truck from nose to tail, we didn’t find any issues with its build quality.

Set-up Notes: We left the beast stock. We kept the stock Dean’s connectors, even though they were a bit loose from being overheated when they were installed at the factory. We didn’t change any suspension settings or even its ride height as they seemed to be well set from the factory. For juice we went with a high-zoot TrakPower 4S 6700 hardcase LiPo battery and for charging duties we enlisted our trusty TrakPower VR-1. For 6S running we used a pair of 3S Reedy LiPos.

Turning: The Senton didn’t have a particularly strong turn-in at corner entry, but the front tires stayed well planted from the apex through the corner exit. The rear tended to stay well behaved, rarely jumping out unexpectedly. The soft suspension settings did wonders for carrying speed on a slick dirt track, but also caused it to occasionally traction roll (which might have been made worse because of the huge body support cage mounted so high on the chassis).

Jumping: Overall the Senton jumped well, but not as good as some of the other trucks in its category. It ignored ruts well enough on jump faces, but had a tendency to jump slightly nose down. It was also sprung/damped a bit on the soft side for its weight, causing it to bottom out hard on big landings and when hitting jump faces at high speeds. Also, because of its relatively low gearing and lightweight tires, a good hard squirt of the throttle on 4S didn’t bring the nose up much (on 6S it was a different story).

Bumps/Whoops: The soft damping and low ride that gave it so much corner speed worked against it in the rough. Yes, you could pound through blown-out sections, but it wasn’t uncommon for the Senton to drop its nose in extended sections, or kick the rear to the side on braking bumps.

On-Road: While the Senton was designed for off-road use, we had a great time bashing it on-road. Yes, it would traction roll when cornering hard at speed, but overall it was a blast to just pin-it WFO and go flying down the road at break neck speeds on 6S.

Grass: The Senton is pretty much an animal in grass. Its big power and large lugged tires loved to chew up and spit out grass at a feverish pace.

Tires: We liked the scale inspired tread design, but they were a bit on the hard side and didn’t yield a lot of raw grip on hard packed dirt, or on the light loam that we primarily drove on. They did work well on grass and pavement, but lacked forward bite on most of the dirt surfaces that we drove on. And while they might have lacked forward traction, they did have plenty of side bite.

Power: Ya… it doesn’t come with your little brothers tiny 540 system, the Senton comes with a full on 6S 8th scale powerplant. Torque off the bottom was extremely solid and it just kept ripping as the rpms rose. There was no “big hit” of power anywhere, it just pulled solidly from bottom to top. The Senton felt very conservatively geared, so on 4S it didn’t feel crazy fast, just solid, but on 6S the full beast was unleashed. 6S in the Senton is quite the thrill, with an incredible amount of power on tap.

Radio: The Senton comes with the Hobbico standard style radio that works fine with no glitching and good range. Ya, we still miss the original ARRMA radio, you know the crazy one that you could rotate for left handers? We don’t see that one coming back anytime soon, but thankfully the ATX100 works well.

Broken Parts: We found the Senton to be the toughest of the new batch of ARRMA 8th scalers and one look under the hood shows you why. The Senton has big ole’ SCT bumpers on the front and rear, plus it has huge side bumpers, PLUS it has a huge cage on top to support the body. Add that to some very durable plastic and we found the Senton to take one heck of a hard licking and kept on ticking. After going into the torture stage of our testing, we (read Iron Mike) did manage to clip a light pole at 45 mph+ on 6S, thus tearing off a rear a-arm, but overall the Senton was a tank for us.

Yes, the Senton comes with a steel spur gear. No, it isn’t as quiet as a plastic spur would be, but it sure is durable.

As mentioned above, for bashing purposes all those cages/bumpers on the Senton are a Great thing.

The stock servo is VERY good for a RTR unit, no need for replacement there. Also, the Senton comes with a trick aluminum servo arm, good stuff.

For once we don’t hate the body clips. The clips on the Senton are huge and easy to use.

Make no mistake about it, the Senton is a beast, even for a 4wd SCT. It is basically an ARRMA Typhon (8th scale buggy) converted to SCT, so it weighs more than a typical 4wd SCT, and comes with much heavier running gear. Heavy/overbuilt is typically a great thing for bashing, and that rings true on the Senton.

The Senton comes with 17mm hex wheels. Most SCT wheels come with a smaller hex, but the larger hexes on the Senton make it easy to bolt on 8th scale buggy tires.

We did a lot of waterproof testing with the Senton and it passed with flying colors. Not only did we drive through various mud holes, but one of our testers (once again, Iron Mike) landed in about 2 feet of water and the Senton worked fine afterwards.

Best Mod: While the stock tires have a nice scale look, there are plenty of other tires with more traction on the market. And trust us, on 6S you will be looking for more traction to put all that yank to the ground.

Time To Bash: B The Senton doesn’t take long to get bashing. Pop some AA batteries in the transmitter, then slide in a good LiPo and you are ready to rip.

Workability: B While the body cage might look to be in the way, it is easily removed, and the truck as a whole is very easy to work on.

Car Show Rating: B Our testers were big fans of the scale looking wheel/tire combo. And while the paint scheme on the body might look a little “busy” in the pictures, in person it looks really sharp.

Bash-A-Bility: B The Senton is one tough customer to break.

Fun Factor: A Its overall toughness and ridiculous 6S power system put it on the top of the 4wd SCT heap for being fun to drive.

Handling: C The 4wd SCT class is filled with great handling machines, the Senton didn’t excel in any one category, thus landing it with an average rating.

Value: B While the price point isn’t cheap, you are getting a heavy duty bash machine for your cash.

Parts Availability: C ARRMA is taking off here in the America, but you still won’t find parts on the shelf for the Senton at most local dealers.

BigSquid Rating:B The Senton is very tough and comes with an extreme amount of power under the hood. We consider it the tank of the 4wd SCT class and an extremely capable bash machine.