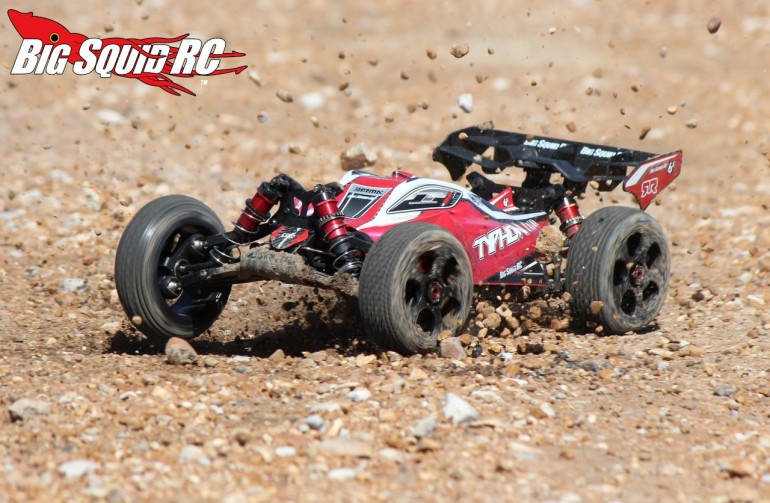 With the 10th scale ARRMA RC vehicles becoming legendary among the basher crowd, ARRMA decided to take it up a notch and start producing 8th scalers. We’ve been bash/crash/thrash testing the Typhon BLX 8th Scale Buggy for weeks to see if it lived up to the ARRMA reputation for speed, durability, and handling. How does the Typhon stack up? Is it a great basher? Keep on reading to find out…

Set-up Notes- We ran the Typhon all stock with one minor modification, we set-up the battery tray to accept a square 6S LiPo pack. For that pack we chose a FlightPower 6S 5500 which gave the buggy loads of power and runtime. To charge the pack we used the very highly regarded TrakPower VR-1.

Handling- With its Durango heritage, the Typhon is a sweet handling machine. Suspension settings out of the box are right in the ballpark, soaking up bumps and jumps with the best on the market. It also jumps really well, it tends to jump flat and when it doesn’t, it is easily corrected with throttle/brake input. The Typhon handles well for bashing, while at the same time you can hit a local track with minor changes. We also really liked the way it turned. It had a bit of oversteer at corner entry, but was generally neutral from that point on.

Power- While the motor seems a bit on the small size for an 8th scaler, it packs plenty of punch. Low end power is impressive, it rips through the mid-range quite briskly, while on top it seems to have rpm for days. If you are looking for insane power, the Typhon definitely has it on 6S. We did notice some cogging from a dead stop, but once moving it oozed power all over the place.

Durability- We got in some serious drive time with the Typhon and here are some of the things we noticed. The Deans connectors are nice but were quite loose fitting. That really isn’t a durability issue, but on occasion they would cause a bad connection. Also, all that wonderful 6S power was rough on the wheels and tires. We threw off a couple of tires while ripping it hard, which was an easy enough fix by putting on some CA glue. The biggest problem we ran into was the stock speedo, it gave up the ghost after a few runs. We got a replacement unit and had no more speedo problems after that. Lastly, we didn’t break any plastic parts on the Typhon, even when driven in semi-cold temps (30-40 F).

Overall- If you are looking for serious power from an RTR, with handling that can actually put it to the ground, the ARRMA Typhon can do it.