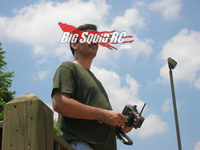 “Hi Cubby,
I must say I am thoroughly impressed with the Granite BLX after seeing the bash video and reading the review. However, I couldn’t help but notice that you guys gave it a “B” on the Bash-a-Bility rating. A buddy of mine has the brushed granite, and that thing is INSANELY tough. Once you replace the servo its pretty much indestructible. So, my question to you is why the “B” rating on the brushless? Does it have some redesigns that make it weaker? Or is it just not as tough due to the insane power (and I know you guys love to huck your trucks). The truck looks as tough as the Tumbler from Batman Begins in the video, so what’s holding it back from “A” grade?

Cubby- Hey Jon, thanks for the email and congrats, you actually have a really good question.

We hate giving out an “A” unless we really have to. To get an “A” in our Bash-A-Bility category it pretty much requires that the vehicle not break at all. And we define “breaking” as the vehicle can’t not be driven anymore. A truck might be tweaked here or there, might have bent parts, or might have a tie rod fall off, but if it can still be driven we don’t hold it against the score. If it takes a trip to the hobby hop to get it going again, that is a break.

The brushless BLX version of the Granite is still one tough customer, that took a lot, actually a pretty insane amount, to break. But… it did break, therefore it received a B for Bash-A-Bility. The BLX and the brushed version share a bunch of parts, but being brushless the BLX is hitting everything much harder, which of course just makes it that much more difficult not to break.

To boil it down, for the BLX to have received an A, it could not have broken, even though it was jumping higher and hitting walls much harder with its new brushless powerplant.

“Hey there Cubby,
A few weeks ago I had the urge to look up some kits that I had been eye balling in years past and see how they were doing. I was happy to see the Kyosho Mad Force and Blizzard are still around. Something that almost made me cry is that it seems the RC10GT2 has been discontinued. Is that true? Don’t really see it on the RC10 site and towerhobbies lists it as discontinued. I also don’t see Losi’s equivalent anymore either. What happened?
Thanks
Michael”

Cubby- Yo hey what’s up Mikey? Thanks for the email.

So… what happened to the 10th scale nitro trucks? A few things actually…

ROAR ditched the class years ago, thus killing them at the competition level. Local racers could have stood up and supported the class locally, but instead were lured to the plethora of other classes to run.

Electric was blowing up huge when the Associated GT2 came out and has continued to do nothing but grow. Tuning a gas truck engine just isn’t for everyone.

And finally… have you ever tried driving one of those things on a slick surface? They are kinda like a 3S Lipo/brushless 2wd electric stadium truck, they just aren’t easy to drive. Sure, doing some donuts is fun once in a while, just not ALL the time.

That’s it for this week ya freaks, next week I’ll be selecting a “letter of the month” winner who will get a free t-shirt, so get those letters in. Cubby at BigSquidRC.com