Hey Cubby
So the question I have is, why can I run a LIPO on a car for 20-30 minutes but a plane only get 5-7 minutes? What is causing this large runtime difference?
Sean

Cubby– Yo what’s up Sean? Don’t forget to send us your snail mail to get some free stickers to plaster your rig with.

Perhaps a more relevant question for readers of BigSquidRC might be- why do some people only get 5 minutes of runtime when another guy with the exact same truck and battery can get 20? We all hate going bashing and being the guy whos truck dies first.

Let’s say “Iron Mike” and “Wrench” Bill both have identical Castle powered Traxxas Slash’s and use the exact same 2S 5200 mah Lipo battery. Iron Mike might only get 8 minutes of runtime while Bill gets nearly 20- there are a lot of factors at work here.

Iron Mike drives WFO all the time. The only time he lets off the gas is when his finger finally tires out, he might as well zip tie his trigger wide open. Iron Mike also likes to gear his truck for 189 mph, thus pulling more current through the power system, and chances are his Slash is covered with mud making it heavier and creating more drag in the drive-train.

Bill drives pretty normally, he lets off before corners, rolls on the throttle out of corners instead of just pounding it, etc. Bill tends to gear his trucks for a reasonable top speed, not for the salt flats like Iron Mike does. Bill also tends to take good care of his trucks, meaning there is no unwanted binding anywhere, thus wasting less energy from the battery.

The way a vehicle is geared has a huge effect on its runtime, as does driving style, as does how free its drive-train is.

In your case Sean, you are comparing apples and oranges. Your airplane may have a much different BL power system in it than your truck, thus yielding a drastic difference in runtime, or you might be running a comparatively larger capacity pack in the truck compared to the plane. Generally, the biggest difference is airplanes consume energy in a more continuous manner, where surface vehicles briefly pull power in spikes. In an airplane you might slowly go from 70-90% throttle during most of your flight, while an rc truck is quickly (and constantly) blipping from zero to 100%. But, given a few changes, it would be easy enough to switch those runtime figures of yours. You could mount a smaller prop on your plane, shave some weight, and install a pack containing more energy to boost its runtime. You could then gear the truck to death and throw some huge/heavy tires on it (or install a very small capacity battery) and get its runtime down to 5-7 minutes (or even much less).

To boil it down- runtime is easily changed for the better or the worse, regardless if its an airplane or a surface vehicle.

I have been in the RC hobby/Addiction since I was 13, that was 1995 and I have to say it has been a fun ride. Starting with a Losi JR t and owning something from almost every brand and style since then has been a great time. I have taken my breaks as most of us do, but never really left the hobby. My most recent come back was about 2 years ago, brushless had me interested so I started to bash a bit, and wanted to race but just couldn’t get the jump start I needed. Then I went to The Bobby Co. RC track and hobby shop in north central Illinois and it was the boost I needed. All the employees and fellow drivers were great. They asked what I had, showed me what they were racing, lent me tools, knowledge and sometimes even a part or two. It is the pinnacle of RC club racing. These guys do it for the fun, for the competition, and more recently because one of the “Race Teams” female member has been making and selling the best nachos we have had in a long time.

To sum it all up I travel for work, Seattle Wa, Dallas Tx, Fontana Ca, Pulaski Va, and Reno NV. The best part about the traveling is by far being able to find a club, or shop where great people are working and racing. Everyplace I go an attempt is made to find a track or club and drop in to watch, same story every time people are great, and I have even been “loaned” a car or truck to make some laps with.

So sites like this, and people who race are what keeps me coming back.

Cubby– Hey what’s up Donnie, thanks for taking the time to write in, shoot Brian your snail mail so we can hook ya up with an uber sticker pack.

I also do a lot of traveling, not only for BigSquidRC, but for other work, and I agree with ya, there are some incredible people in the hobby. For every low-life-scumbag-cursing-transmitter-thrower there are about a dozen good guys willing to bend completely over backwards to help someone out. Like yourself I’ve been all over the country and walked into places where I’ve been blown away with hospitality, and not because I’m with BSRC because they didn’t recognize me, it’s the fact that they were hospitable to every person walking through their door.

Have fun, go fast, and thanks for reading BigSquidRC Donnie.
Thank you Big Squid and the RC world.

This next one is a bit long.. so keep reading for the whole story…

da reverse thred nut dat was sugestd last week was absurd. srsly. its no ware neer a design flaw. such a ludicrus sugestion it was. cunfused xerxes is.

but in regards 2 da axles, xerxes has found a tru hpi screw up dat is cumpletly worthy of da lable. “design flaw.” atttachd is 2 picturs. captiond wif da problm. incase u cant post pix, he will xplain it.

srsly hpi? a 5mm thred onda stub axles? ders not evn 5mm of meat on it. da centre of da threds, wer all da meat is is only 4mm. 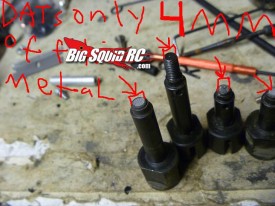 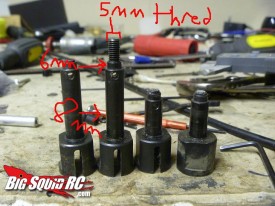 Cubby– A little background for the readers here, “xerxes” is who we normally refer to as “ICP Guy” around the office. No doubt he’s as core of a basher as you will ever find, he’s all about stacks of uber-bashers. And… he even pwned our “pro driver” guy at our summer bash in the “shopping cart bullseye jumping competition”, so he’s a legit driver. Oh and ya, he’s definitely a fun guy to be around in person.

I won’t attempt to translate ICP Guys email, I’m simply going to leave it alone for your viewing pleasure. All I will say is that it sounds like HPI should hire ICP Guy for their r & d department. 🙂

That’s it everybody, submit your questions, rants, and Juggalo-Speak to Cubby at BigSquidRC dot com. If your email hits the big time you’ll get free stickers, and if I proclaim yours as “Letter of the Month” you’ll get one of our brand spank’n new uber Squid shirts.