ASK Cubby- More Of Your Questions As The World Spins Round

Does this annoy you too? Is it really just me that minds when a big rc company (no fingers pointed) constantly releases the same product that just looks a little different. Every company does it (including my beloved axial) and it just irritates the hell outta me. To point a finger, the almighty Tamiya CC01; I think they could do some very simple things (smaller rear axle housing, metal gears, better tires) to that chassis and make it much better and more widely used by all, but they refuse. Can you think of any possible reason? Because I’ve given up.

Cubby- Pretty much the answer to any question is money, and that is the case for yours as well. It costs the manufacturers a boatload to do an entirely new kit, so it saves a lot of up front cash to use a platform multiple times. It doesn’t matter if it is rc or full scale, it is just something that has to be done to make money. Btw, it doesn’t really bug me except for- when some company keeps using an old platform that just has a couple of small issues, but refuse to fix them, even after decades of being on dealer shelves. Now that torques me off.

Oh and… you brought up Axial, I’ve always wondered why the EXO Terra Buggy platform was essentially only used once. Yes, I know it is partially used in the Yeti, but I would have thought they would have sold the entire EXO platform as a scale truck at some point, but never did. Hummm… where is Rodney’s number…

My question comes from just finishing up my Proline Pro-MT build; I don’t know of any other companies that provide a partially built kit such as them. But my question is, do you think if the pricing was less on partially pre-built kits (and kits in general), that more bashers would take advantage of ensuring the build quality is just right for them?

I honestly grabbed the kit up on a whim as I had spare electronics (motor, esc, receiver, transmitter) from a Granite BLX to donate. Sure, the truck is “slow” with only a 3600KV motor compared to the 4500KV+ rockets that I see around the web for this kit; but overall it wasn’t difficult to build. Maybe four hours for the actual build and another two hours for the body.

Maybe I’m nuts, but it seems like you can get more for your money buying a kit vehicle and electronics, despite typically paying more than a comparable RTR. 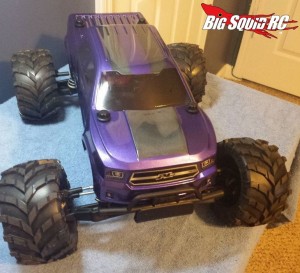 Cubby- Yo hey Steven, congrats on your new PRO-MT, it is indeed a primo bash machine.

And yes, for a seasoned hobbyist it often times makes a lot of sense to buy a kit instead of a RTR. Most hobbyists have a few extra servos/speedos/motors laying around, and they typically end up ditching the stock RTR electronics anyways.

About your question… no, even if the pricing of kits dropped I would doubt there would be a huge surge back to them. RTRs are all about convenience, and even at a scant build time of 4 hours on the PRO-MT, most bashers still just want instant satisfaction.

Btw… there is another company that has gone to partially built kits lately, Team Durango. Look at one of our recent build logs on the Durangos and you’ll see that their “kits” come mainly as pre-built sub-sets, saving time yet giving the owner the satisfaction of watching a pile of parts become an actual car.

Lastly… don’t think that 3600kV means slower or less powerful. In the case of many non-sensored BL motors, it simply means less rpm per volt of input. There are plenty of 3600 motors with the same wattage (power) as high kV units, it just takes a bit taller gearing or higher voltage to get all the wattage to the ground.

And… that’s all for this week ya freaks. Have a question? Got something you just have to get off your mind? Here is my email- thecubreportrc at gmail dot com. If your letter makes the front page you get a free sticker pack, if I proclaim yours as “Letter of the Month” we’ll even hook you up with one of our uber BSRC t-shirts!