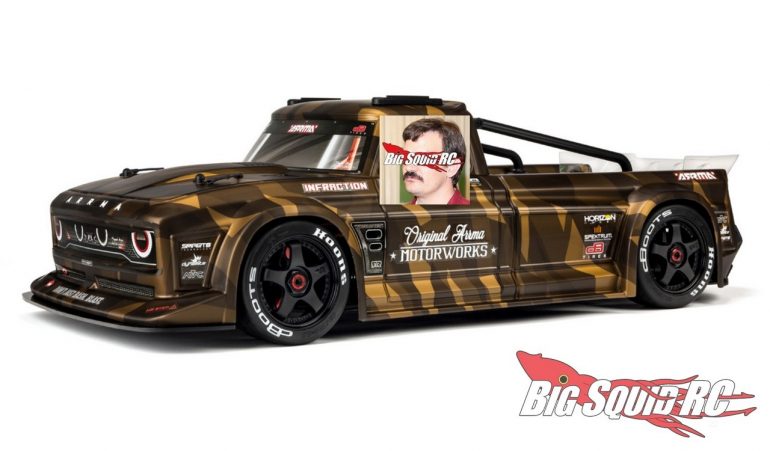 So… on a “normal” Thursday, ASK Cubby would appear in this spot. However, this week ARRMA pulled out all the stops and dropped not one, but two, all new on-road cars. This is HUGE news in a few different ways, and as you long time readers know, every once in a while I do a special write-up when something really big comes down the pike. The ARRMA Infraction and Limitless 1/7th scaled on-road cars are certainly huge news.

Why are the two ARRMA on-road cars such big news? First off, the on-road segment of our hobby has been slow for over a decade. “Back in the day”, touring cars were huge, garnering large attendance at local races, as well as loads of aftermarket support. Nearly every manufacturer had their hat in the touring car ring, and big on-road races like Snowbirds, were getting over 1000 entries (they were racing 24 hours a day!). Since then, the world has gone mostly off-road, for racers, and for bashers.

As I’ve said for years, someone needed to save on-road. While hard numbers are quite difficult to come by, we know from first hand experience that while most people bash on any surface they can, a whole lot of people only drive on pavement. Furthermore, because of the fact that most new cars hitting the market are off-roaders, that has made for a whole lot of off-road trucks being driven only on pavement. Also, larger tires and much longer suspension travel is the norm for off-roaders, which can also come in handy when driving on pavement that is far less than pool table flat. To boil it down, traditional on-road cars (1/10 touring cars) sucked for bashing on real world streets, while most off-road oriented vehicles soaked up everything without whimper.

Other companies have tried over the years to revitalize on-road, but mostly they have targeted cars that were great on a super smooth track, but were far less than optimal when driven on rough, pothole riddled, real-world streets (cue- any 1/10 190mm touring car). It looks like ARRMA is taking a whole new approach at the on-road segment, and doing so in smart way. Basically, they decided to throw caution to the wind and go big!

The 1/7 ARRMA Infraction is aimed at hardcore street bashing. It has massive power on tap, plus big enough tires for rough streets. It has enough suspension travel to truly handle normal cracks and bumps while driving at warp 3.2. It also has a center diff and Spektrum’s AVC stability control, two features that come in super handy when trying to put crazy power down to rough asphalt. The second car, the Limitless, comes as a roller with an Indy/F1’ish look. It looks like it was made “straight-up” as a speed run car featuring a locked center spool and plenty of room for massive electronics.

Putting out a pair of on-road cars would be incredibly risky for most companies, but perhaps not so much for ARRMA. Their fan base is an especially fervent bunch of tifosi that would pretty much buy whatever they put on the shelves. However, to really help swing the hobby around, and to simply “save on-road”, both of ARRMA’s new designs will need to catch on to a wider audience. Normally, that would be nearly impossible, but ARRMA has been consistently putting out the type of innovative products that bring in new people.

Will the ARRMA Infraction and Limitless make on-road driving “big” again? Only time will tell, but you must applaud the crew at ARRMA for going hard at a scene (on-road) that has long been neglected.

OK, next week we’ll get back to our regularly scheduled ASK Cubby. Until then, support those local hobby shops and bash spots when ya can!