Someone posted that it’s an ECX under the hood, so how are they selling an ECX with Spektrum DX2E transmitter AND that crazy custom body for $25??!?

Cubby- Well hello there Brian and thanks for the question. Oh and congrats, yours is the letter of the month, thus entitling you to a free BSRC t-shirt.

For you guys out there that don’t know/haven’t seen the Mini Wiener Rover from Oscar Mayer (yes, the hot dog people), here is a pic-> 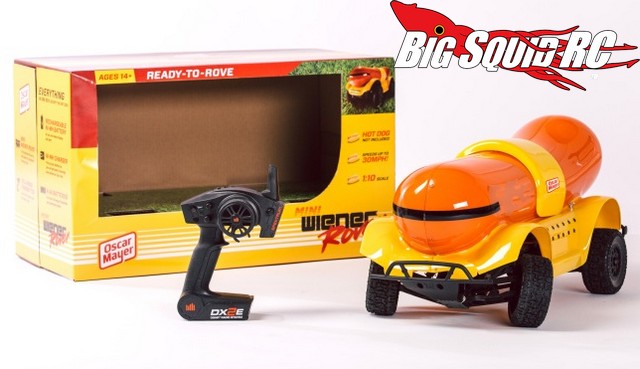 So… a “normal” ECX Torment sells for $169. Heck, a “normal” Spektrum DX2E sells for $59. So… just how can Oscar Mayer sell their entire truck for only $25? Does this mean that a “normal” Torment costs less than $25 and that you are getting bent over hard at your LHS?

Well, I haven’t made the call to my guys at Horizon, although I did have lunch with one yesterday and I was simply too lazy to ask about the Mini Rover, but here is my educated guess (which will surely lead to me getting called by someone more in the know). Oscar Mayer is a huge company with a giant marketing budget. My pure guess is that someone in marketing at Oscar Mayer came up with an “outside the box” idea on how to spend some marketing cash. They called up Horizon, ordered a few hundred uber edition Wienermobile Mini Rovers (which probably cost them more than a standard Torment) and then started posting them for sale for only 25 clams on their social media sites.

Ok, so they are probably losing $150 per car when they sell one… but here is where they MADE a lot of money on the dealio- everyone from BSRC, to Gizmodo, to CNet, to Fortune.com has posted about it. Do you know how much it costs for a paid post on a mainstream website now days? Easily 5 digits. So while Oscar Mayer might be losing 30k by selling the cars under what they paid for them, they probably got 200k worth of free advertising from it. Plus, they now have scores of people sitting on their computers hitting refresh on their various social media pages in hopes of scoring one. Brilliant I tell you, absolutely brilliant marketing, and I hope the person who came up with that idea gets an obscene X-Mas bonus.

I am now strangely hungry, haven’t had a hot dog for while, but now I strangely want one. Time for lunch I think… 🙂

“Getting a parent into the Hobby

A few months ago I picked up a Sprint 2 as my first RC, just to play around drifting. My dad has been eyeing RCs for as long as I can remember, so I figured it would be fun to get another touring car so we could have some good Father-Son time, so I cut the check on another HPI for him for X-mas. On to my question: Do you have any suggestions for “bashing” with a couple touring cars, especially something to encourage my dad to want to drive around and get deeper into the hobby?

Cubby- Hey ya Matt. I think out of the thousands of letters I’ve received over the years that your question is probably the hardest one to actually answer. And that is saying something. Consider yours as the second letter of the month and if you send me your snail mail we’ll hook ya up with one of our uber new BSRC t-shirts.

Ya know, it’s pretty cool that your Dad is ok with rc and that you want to get him more involved. I always wanted to get mine involved too, but he was gnar-core old school and saw hobby grade rc cars as nothing more than the Tycos he bought me when I was 5. He would see me wrenching for hours on end, he would see me out with a tractor building various rc tracks, but he was never, not once, interested in doing it for himself. I messed up, I never made a big effort to get him into it, heck, I never made a big enough effort to ever do anything with him when I was a teen, and then he passed and I regret all the extra time we could have spent together, but did not.

With that said… I would say that while rc is obviously your passion, it might not be his. He might just be a very casual once a week driver, while you might drive 2 hours a day. Treasure that once a week you get to drive with him, then make it about him, attempt to enjoy his passion. Your Dad may be into woodworking, or gardening, or traveling, or whatever, but do your best to enjoy some of that with him too. I hate to be a fatalist here, but from personal experience, you just never know how much longer anyone else will be around. The single most precious thing in the world is time, spend it wisely (and hopefully as much as possible with your Dad).

And there ya are, yet another edition of ASK Cubby. Have something on your mind you think the masses just have to know about? Work in the industry and can’t wait to talk about (read complain about) the latest products coming down the pike? Shoot me an email, thecubreportrc at gmail dot com.