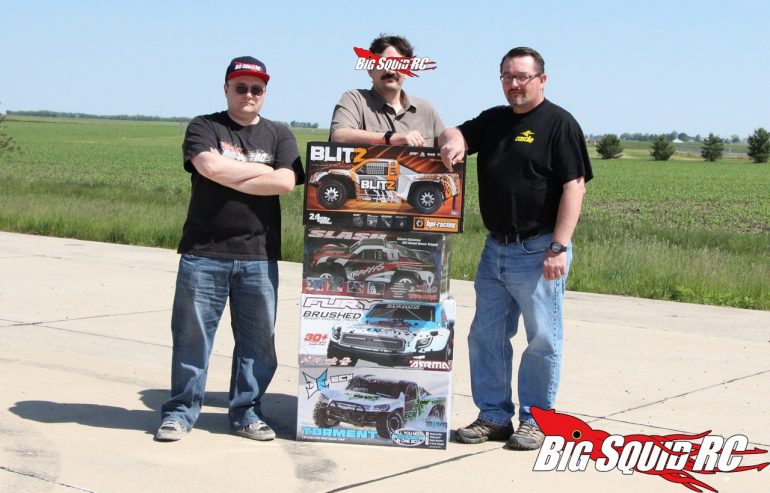 ASK Cubby – Yet Another Questionable Thursday

I am in the market for a new Transmitter. I originally wanted to get a Futaba 3PV, but thanks to Big Squid RC I now am very interested in the Spektrum DX5 Rugged.

You stated the Spektrum has a ton of Range, but the Question is, has the Futaba 3PV more Range? Is there a (noticable) difference in transmitting speed?

And how do both of those compare to the Futaba 4PLS (which would be roughly the same price as the Spektrum)?

Greetings from Germany, thank you and keep on bashing

Cubby- Well hello there Viktor, thanks for writing in. Like I’ve said before, we have so many readers overseas, it really is great hearing about the hobby from different parts of the world.

OK, so what’s the better transmitter for you, the Futaba 3PV (or 4PLS), or the new Spektrum DX5 Rugged. The real truth is that all three drive really well. Like, so well, that you would be hard pressed to tell them apart. I won’t say that any of the three drives better than the other because I have not driven them back-to-back-to-back, but based on all the hours I’ve had with each (I am guessing over 40 hours with each in hand) I know for a fact that they all drove like proper high-performance transmitters (better than RTR) should.

About range, once again, I have not compared any of those three radios for range back-to-back. However, I do remember driving all three as far away as I felt comfortable doing, and I still had full control of the cars. And while older Spektrum radios had poor range, their new stuff, like what’s inside the DX5 Rugged, is legit.

If range is of the utmost importance to you, there are a couple radios known for true insanity (like that ARRMA RTR radio from a few years ago). Typically, insane range is only needed for speed runs, but who knows, you may have another special application where it is equally important (FPV).

At the end of the day, all three are solid radios, but the DX5 Rugged stands out. Not only is it “rugged” enough to withstand the rigors of everyday bashing, but it also drives like an elite radio. And well, that “rugged/tough” look that everyone wants to be seen driving with, that doesn’t hurt it either.

So hey Viktor, no matter what you end up with, shoot me an email and let me know how it is working for ya!

Hey Cubby, what does it take for me to get faster on a real track? I keep smashing off pipes, people are starting to hate me!

Cubby- Well hey there to you too, what’s up D-man?

So what’s the secret to driving at a track?

If you are a basher and have never been to a legit “track” before, the transition can be difficult. Those 8′ (or less) wide lanes might look easy to drive when watching Tebo or Ronnefalk crushing the field on YouTube, but when a basher hits the track for the first time, they tend to crash, like a lot. I don’t think most bashers realize just how wide their backyard is, so they aren’t used to driving in such a constantly precise manner.

The race guys can keep their cars Exactly where they want them, at all times, over crazy terrain, and with people cursing all around them. Where as a “basher” might pride himself on the ability to land triple backflips or the ability to jump over the two story house next to him. A “racer” prides himself in the ability to keep his car right on a 10″ wide line all the way around a track, all the while dealing with hacks, while also driving as closely to WFO as humanly possible.

If you are a basher hitting a track for the first time, here is my advice.

1. Ya, that 3 or 4 or 6S pack you have in your rig? Leave it at home. If you are running 1/10th scale, run 2S, if you are running 1/8, just run 4. Your first time at the track will be SOOOOO much easier when your rig isn’t wayyyy overpowered. In fact, feel free to gear down to where your buggy/truck/whatever feels fairly slow, like about the speed of a typical RTR (that’s right around 25 mph) for 1/10th scale, and maybe gear for 35 with an 1/8th scaler. Soft smooth power will help keep you out of the pipes.

2. Go into corners slow, come out of them quickly. 90% of crashes I see from people driving a track for the first time is simply them coming in way too hot. On those early trips to the track, make a point of going into a corner slowly.

3. Don’t crash. Now Devin, it sounds like you are having a problem with this in particular. Not crashing is simple, but it takes some will power. To not crash- keep driving more slowly. If you feel like you are only driving at 90%, yet you still crash every other lap, back it down to 80%. If you are still crashing at 80%, back it down to 70%. Keep backing it down until you crash maybe once per pack. Then, you practice, and practice some more, then even more. As you practice, you will be able to bring up that pace before you start crashing.

4. Remember the “fast guys” have Thousands of hours of practice between them. And yes, rc is a sport where practice matters, in fact it matters more than anything else. The more you practice, the less you will crash, and in turn, the faster that you will become.

So there ya have it for this week. Do you have a question? Really need an answer? Have a rant that you just have to get off your chest? Email me- thecubreportrc at gmail dot com.