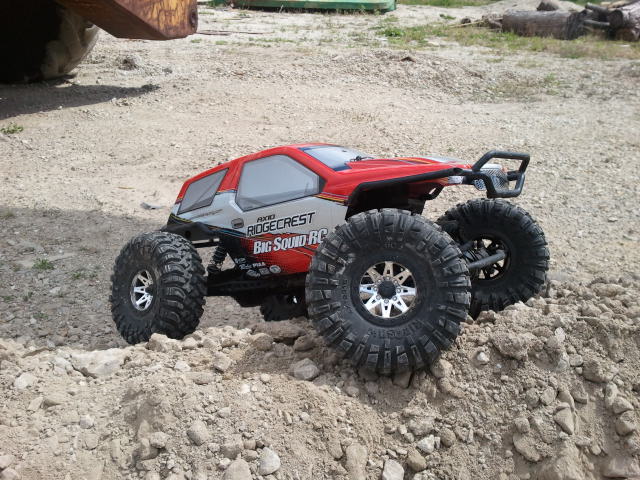 The all new Ax10 Ridgecrest is Axial’s latest truck to enter the crawler/scale scene. When you first look at the truck it seems to be an Ax10 with a new body, but look closer and you’ll find it has an all new chassis with scaled down Dana 60 axles (also used on the Wraith). The truck looks great! I agree with Brian in the fact that the tires look huge. Lets see how it handles..

Review and Pics by: Adam the Intern

Unboxing: The truck is ready to run so it’s basically plug and play. Axial has finally upgraded to hex drive hardware making it less likely to strip out bolts. Axial’s very cool looking 2.4 remote has a built in fail safe unlike some remotes that allow your car to take off full speed if the transmitter accidentally gets shut off or dies. The only thing that was wrong with this truck when I first tried to drive it was both of the motor wires were unplugged, right out of the box.

Driving: I ran the truck on a variety of terrain- sand, gravel, water, dirt, clay, and of course on my crawl course. At first it drives like more of a monster truck than a crawler, but when you take it to the rocks it really does perform. I was surprised at the way it had enough low end torque to crawl but still ripped wheelies in the grass and was fast enough to jump off a ramp. The truck really performed well on a combination of all the different terrains. While testing we found a spot where there was a little bit of everything, this was where the Ridgecrest really shined its brightest. The tires grip soft gravel and sand like they were made specifically for it yet they still bite enough to get through a crawl course.

Crawling: When crawling the Ridgecrest is a little top heavy with the battery mounted in the back and it doesn’t like steep hills. The 4 link suspension setup provides plenty of articulation to get your wheels up and over just about anything. Axial’s new speed control finally has built in drag brake. You no longer have to use super tight gear-mesh as a make shift drag brake. Also of note, the Ridgecrest comes stock with both diffs locked right out of the box. It would be interesting to unlock both diffs to see how it drives just for fun. The truck is every bit as rollover prone as the Wraith because it’s basically the same truck with the exclusion of a tube frame or interior.

Jumping: The Ridgecrest is a lot of fun to jump because it takes to the air like a real rockracer. However, I did notice that it doesn’t have enough wheel spin to level out the truck in the air. Being the BigSquid Bash Crew, we ended up jumping it off of things the Ridgecrest was never made to withstand. The truck got launched off
a roof, down a slide, hucked off the top of the slide stairs, and pretty much anything else we could find. The stock shock fluid could have been thicker to help soak up the big hits.

Waterproof? The truck is supposedly waterproof but after we got it wet the motor started to smoke and lock up. After the smoke the motor needed push starts here and there to get the truck rolling. I ended up pulling the motor out and cleaning it, now it works but not half as good as it did before the water hit it. We will keep looking into this one. Maybe something I missed in there.. we were hitting a lot of sand.

Bashing:I’d like to say this truck can take a beating, it ran great for about 20 minutes but then screws started loosening up left and right. The front bumper started to fall off, followed by the servo mount, then the transmission, and finally the axle carrier. The problem is caused by the new style bolts, they aren’t as fine of a thread as the old ones so they don’t like the constant stress and vibration that that the truck was experiencing. Also, the front brushguard split right through the middle when the truck took a nose dive off a picnic table. We didn’t manage to
break anything else on the truck. 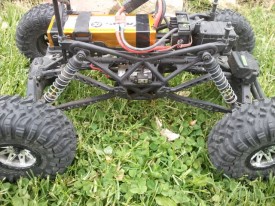 Value: Truthfully I feel the truck should have come with more aluminum for its price. Axial eliminated the beadlock rims which is something every crawler should have. The entire chassis is plastic, the only aluminum I saw was on the servo plate, shock spacers, and the rings on the upgraded driveshafts. Besides that the Ridgecrest comes with an improved speed control the features a built in lipo cut-off. Finally, the Ridgecrest comes with a 2.4 Ghz transmitter, this comes in quite handy when driving with friends.

Workability – 9/10 – The Ridgecrest comes with all hex hardware making it is much easier to work on.

Car Show Rating – 8/10 – The truck looks great but could use a little more aluminum. More aluminum would really make the truck stand out.

Bash-A-Bility – 7.5/10 – The problem with the bolts loosening really hurts the truck because it wasn’t as solid as it would have been with fine thread bolts.

Big Squid Rating – 8.5/10- Overall the Ridgecrest is a decent truck. I think with
some minor modifications it could be turned into an unstoppable rig that will show any other rock racer who is the boss.