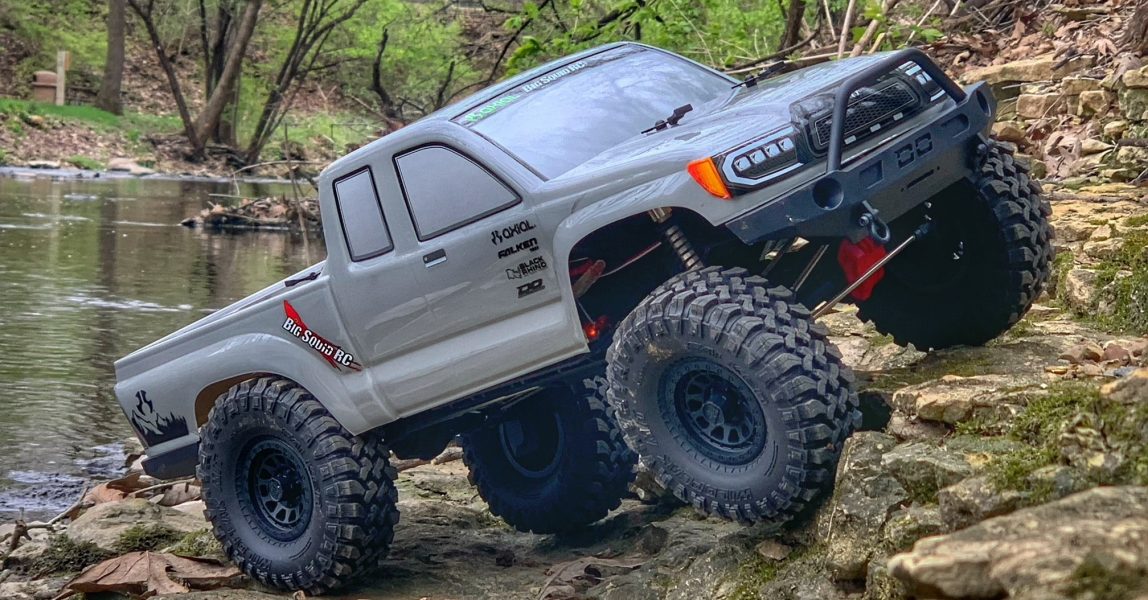 Axial Racing has released a new ready to run called the 1/10 Axial SCX10 III Base Camp, and it is a budget/entry level rig that will open up the doors to this wonderful hobby to all the newcomers while keeping the cost down. Will the Axial Base camp live up to its lineage, or will it be left by the side of the trail? Find out, because Big Squid RC review starts now!

Build Quality: The Axial Base Camp came out of the box in tip top shape. All nuts and screws were properly placed and secured.

Primary Competition: The Traxxas TRX4 Sport is the first rig that comes to mind.

Set up notes: Before you hit the trails pull the front bumper out to the post hole just before the last one. This will help you avoid tire rub with the Base Camps stock body.

Radio: The Spektrum SLT3 3 channel 2.4GHz that comes with the Base Camp is more than capable for the basic rig. Having an extra channel will let you install lights or a servo winch right away without having to upgrade as fast.

Turning: The turning radius is impressive on the Base Camp. The Axial Base Camp comes stock with a Spektrum S614 metal gear 15kg high torque waterproof servo. And yes it is really waterproof, we tested that right away and had a blast doing so. The Base camp is a very light rig compared to the others in the Axial family and that helps the servo do its job better and last longer, but being lighter can cause the rig to tip easier at times. 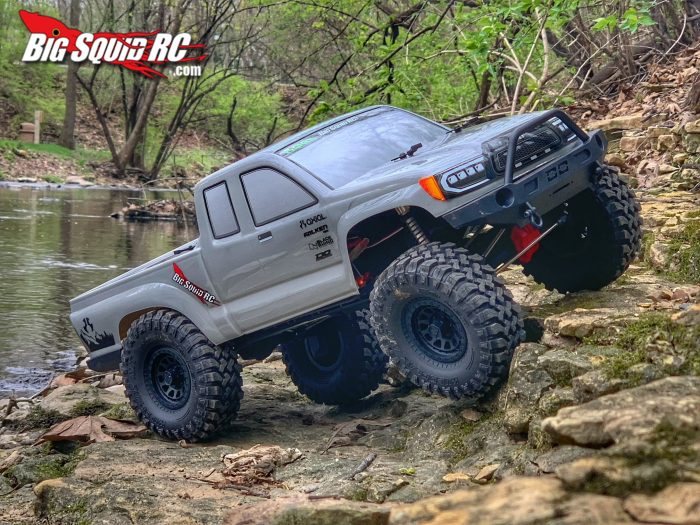 Crawling: For as basic as the Base Camp is, the rig can get down with the best of them. Starting with the tires, the Base Camp comes with 1.9 Falken Wildpeak M/Ts. The tires have an aggressive tread and with a slightly narrower width than past Falken wildpeaks on Axial rigs.  Equipped with AR45 Portal axles, the Base Camp makes it’s way over just about any terrain with the higher ground clearance you get with Portal axles. With the body off the Axial Base Camp resembles the older SCX10 II with the transmission in the center of the chassis, but that’s where the similarity’s stop. The new LCXU single speed transmission is smooth and has a nice low-end throttle control for those critical times. Along with being able to switch out the internal gears for standard axles the LCXU transmission has a lower center of gravity to help keep the Base Camp stable. The only down side we have seen while testing the Base Camp was its weight. The light rig has a tough time on step inclines and sidehills due to the bare bones of the rig. By bare bones I mean, you have no inner fenders, forward facing motor and a basic body. It doesn’t sound like much, but that all adds up to weight we have become used to having. Now these issues are all easily fixed with just a few adjustments to the rig itself. For example, adjust the shocks to be softer and you will see the instant transformation.

Broken parts:  Our Axial Base Camp had its fair share of roll overs along with a few lawn dart moments. The only thing the Axial Base Camp drove away with was some body damage. This is where having a lighter rig helps, roll overs are less violent because the weight to velocity ratio is much lower.

Best Mod: I think a winch or servo winch would not only help the rig look scale, but the added weight in the front would benefit the rigs crawling. What’s cool about the Base Camp is its versatility. You can add parts from Axials line up to make the rig any way you want. Axial adding the extra body mounts to hide the body post for future builds is also a wicked option on the Base Camp.

Summary:
We needed to do a little work out of the box as the Axial Base Camp SCX10 III needed the front bumper moved outward avoid tire rub on the body. Granted this is something that only needs to be done once, but it takes a little bit to do before you hit the trails for the first time. The basic layout of the Axial Base Camp makes working and performing maintenance on the rig a walk in the scale park. Keep in mind that the Axial Base Camp is an entry level rig designed to keep cost down. The body is a good example of that. Not licensed, sticker windows and no depth to the bed, yet the Base Camp still looks good and reminds us of a hybrid of a Toyota Tacoma and a late model Chevy Colorado. The bed may have no depth to it, but Axial added a matte black to the bed and this helps the rigs basic look by splitting up the color of the rig and making it look like a bed cover. The Base Camp does come with licensed Demello Offroad Front and rear bumpers that look killer and help with better approach angles. The rig handles better than some rigs that have a higher price tag and the new shocks and LCXU transmission play a big role in that handling. With a smooth low end, and nice response it is good on the trail. With some added weight, the Base Camp could go from good to great on the trails with ease.

The Axial SCX10 III Base Camp was made for new people getting into the hobby by keeping the cost down and is a great way to help the hobby grow. Even if you are not new to the hobby the Base Camp is a rig you can dive into with tons of potential.

Part support is going to not be a issue with the Base Camp. The Axial SCX10 III Base Camp uses a lot of parts that already come on previous rigs so, finding them will be no problem.

Overall, while we love seeing the hobby get more scale, more licensed bodies, and higher end electronics, it’s also good to see a company releases a budget friendly rig. Not everyone has 600 bucks or more to blow on a RC. If you are just getting into the hobby it’s probably not wise to dump that much into a rig, just to find out you’re not a fan. Axial is covering all aspects of the crawling world, from 1/24, Capras, SCX6, and what I call the scaler series, the SCX10 III straight axle Bronco. Seems like Axial is doing their best to make everyone happy. I can tell you this, with the Axial SCX10 III Base Camp we are very happy and look forward to seeing what the future holds for the Base Camp line up.

Check out our trails video here:

Posted by Jeremy Griffith in Car & Truck Reviews, Featured Posts, New Products on Thursday, May 5th, 2022 at 8:03 am