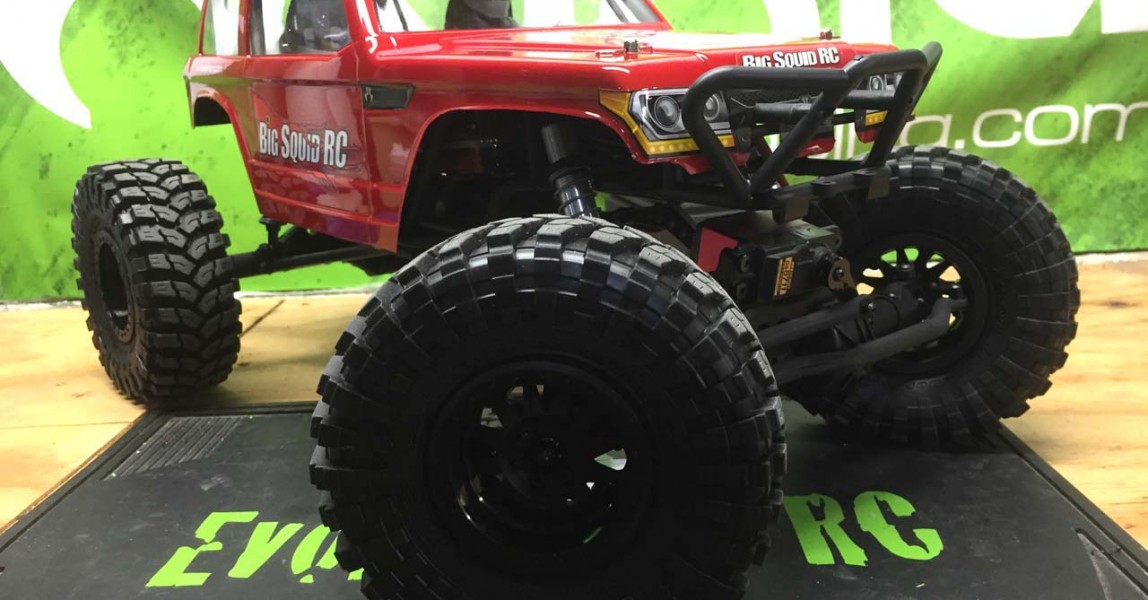 It doesn’t seem like it has been 4 years since the Wraith was released, but here we are in 2015 with the latest 4WD solid axle basher/scaler that has taken the RC world by storm. The Wraith Spawn represents the newest generation of the truck featuring all the latest refinements and tweaks Axial has implemented over the years. This volume of the build is going to cover the build of the stock kit itself (with some of my personal mods I like to do on my own Wraith builds) and some of the changes that this kit features that set it apart from earlier generations. The key word in that last sentence? Kit. Nope this isn’t an RTR affair and that may be enough to scare some of you off. Never fear, Axial puts the Spawn out in an RTR version as well which we have already reviewed. You can check out that bit of info right here!

So lets jump straight into it. At first glance the big thing that jumps out at you is the lexan body. I admit that when I saw product photos of this rig I did not like the looks of it at all. However in the “flesh” it does look a lot better. I’ll always be a fan of the original body panel look of the Wraith but I have to admit that this is a refreshing change. The awesome thing is that you can easily go back to the old look should you choose to because it is the same tube frame lurking just beneath the body. The new lexan interior is a nice change as well. It’s lighter and easier to remove which is pretty cool. Axial gives you a choice of heads to mount on the driver so you can customize the look a bit if you choose. 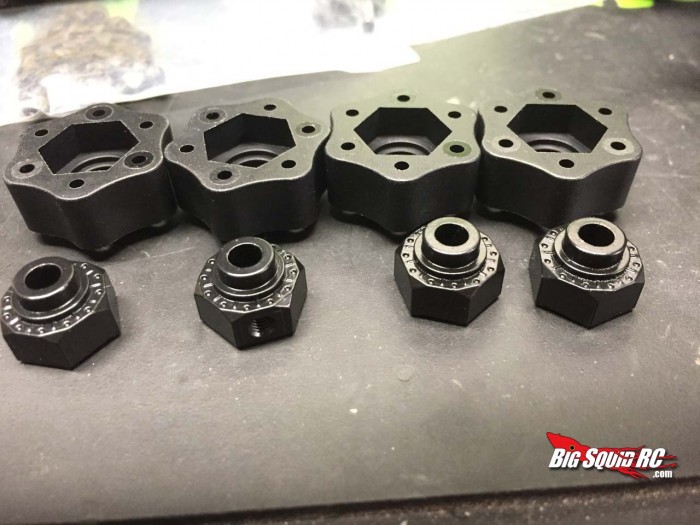 One of the biggest and most welcome changes on this generation of the platform comes in the form of the redesigned hubs. With the earlier released Poison Spyder Wraith came the new plastic wheel hubs that took the place of the aluminum hex in previous models. Drivers quickly found that the plastic hub was not up to the task of keeping the drive pin in check under high horsepower situations. Thankfully Axial has gone back with a hybrid solution that utilizes the original aluminum hexes along with the plastic hub. This should give you the best of both worlds for durability and the flexibility of using Vanquish SLW hubs to adjust your track width or mount aftermarket wheels. 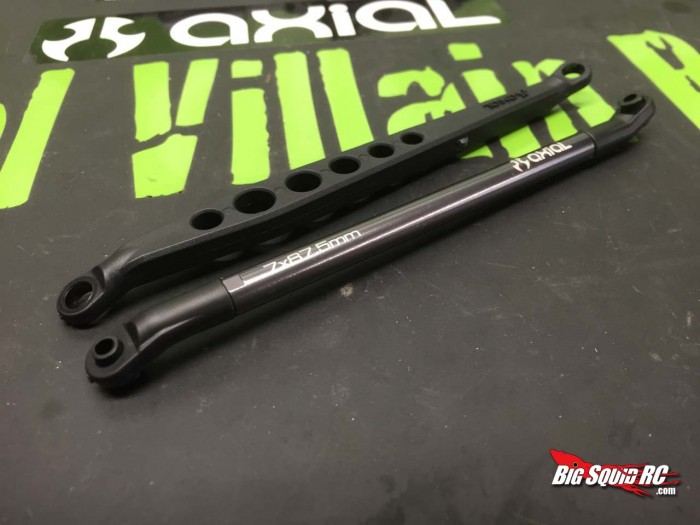 Along with the new hub setup the kit version comes with aluminum lower links as opposed to plastic on the RTR. These links will help keep your axles where they should be if you put the rig in a bind. The plastic versions were always prone to over flexing or even fatiguing and warping after some time. The aluminum units are a meaty 7mm in diameter and should take some punishment before needing to be replaced. The upper links remain plastic however but should hold up fine because they are not subject to the beating that the lower links can take. 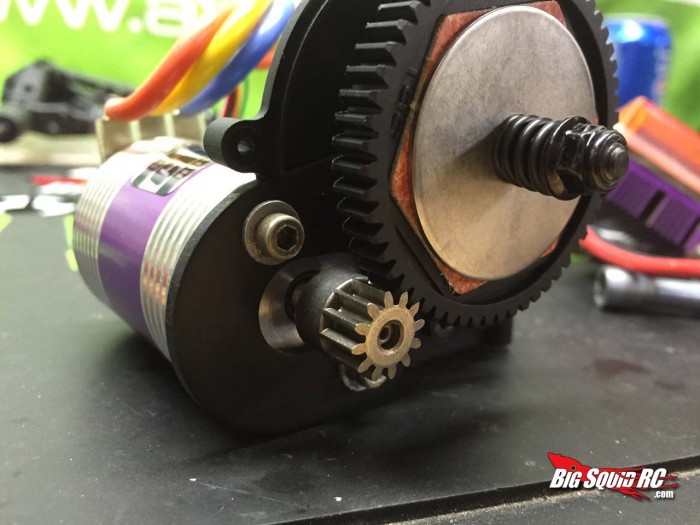 Another great change is that the Spawn kit comes with 32 pitch spur and pinion right out of the box. This was the first mod everyone used to do to beef up their drivetrain when going brushless in the Wraith. The old stock 48 pitch gears just didn’t hold up very well to the rigors of bombing around with this big truck. The new spur also features a dual pad slipper clutch which should hold up to higher horsepower application. Having a properly tuned slipper is key to keep your transmission intact. 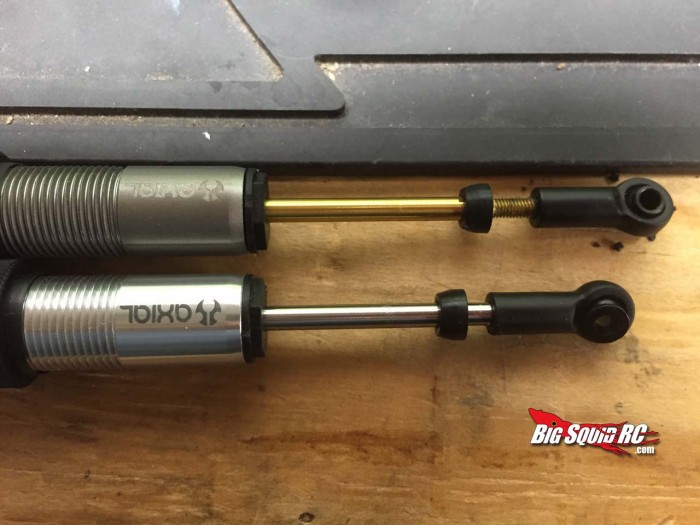 The shocks are another area where there have been some change. The Spawn kit features Icon Vehicle Dynamics licensed shocks with machined pistons for super smooth operation. The new shocks now feature a clear coated polished aluminum body instead of the hard anodized finish on earlier aluminum shocks. 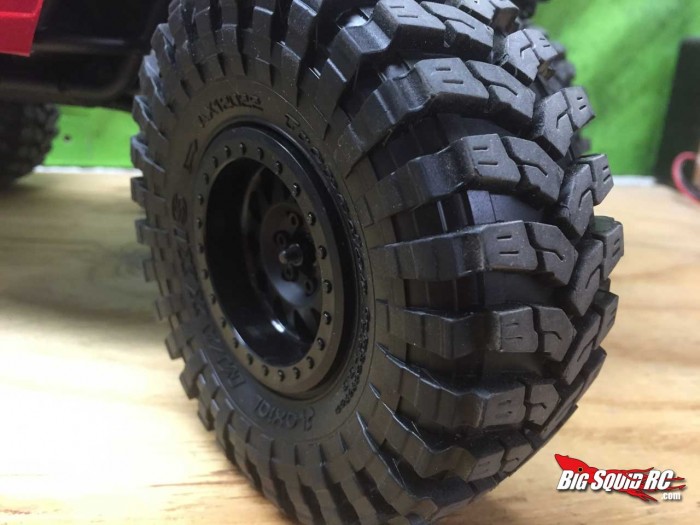 Also making an appearance on the Spawn kit are the popular Maxxis Trepador 2.2 tire. This tire has been a hit in the 1.9 size so they are a welcome addition on the wraith.

I’ve built a couple Wraiths in my day and the Spawn builds up much like any other Axial kit. The manual is clearly laid out and easy to follow even for first time builders. Screw diagrams in 1:1 scale make it easy to match what screws are needed for the job and clearly labeled bags keep you from feeling like you bit off more than you can chew. The kit builds up quickly with no hand fitting as I have experienced in the past. All the metal parts slide together perfectly with no signs of burrs or flaws in the machining. 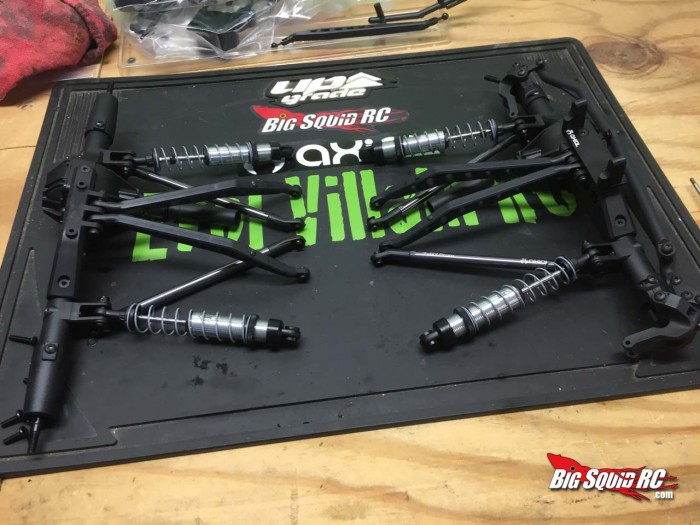 The cage builds up the same as any Wraith cage with the exception that there are no panels to cut and install. Instead the trademark Spawn body must be bolted on after it is constructed. Yes bolted on with 4 screws! More on that later. I used my last can of my favorite Pactra Racing Red (RIP) to give my Spawn its menacing crimson and black color scheme. 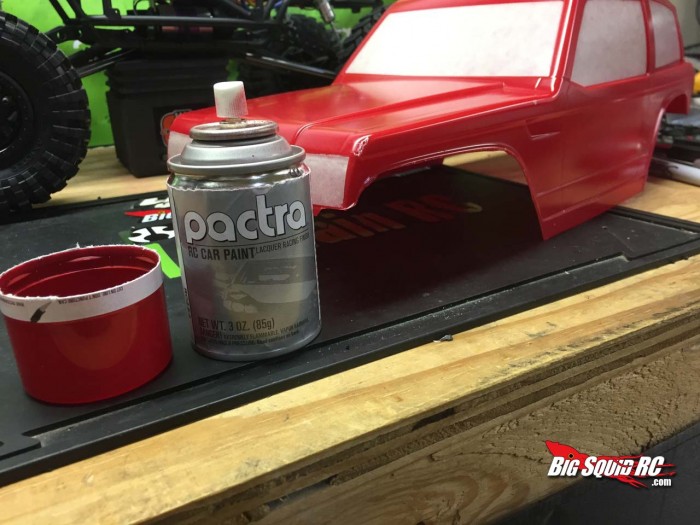 At this point I decided to put my own spin on this install. I’ve always questioned whether the rear battery placement was the best place to mount your gas tank. I can tell you that if you plan on doing anything other than going fast and jumping that the forward battery mount is the way to go. A forward weight bias is always better on a crawler, even a basher/crawler like this. Forward weight bias will give your rig the ability to traverse terrain vertically that will have you rolling backwards if you mount your battery aft. The cleanest way of achieving this is by installing a front electronics tray. 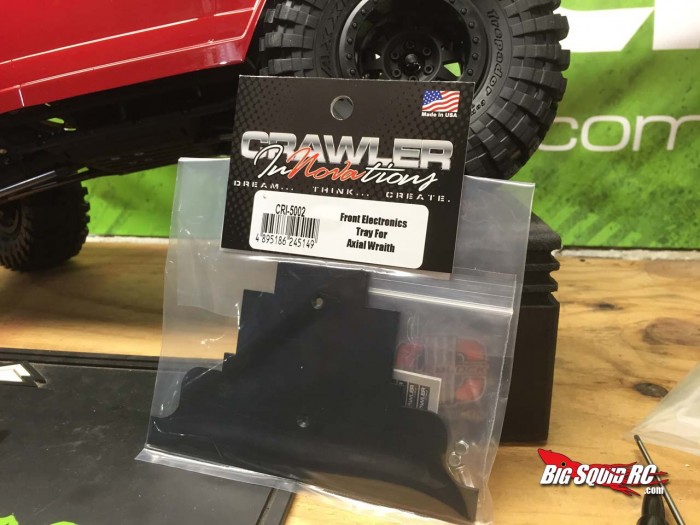 Crawler Innovations puts out this great delrin front electronics mount that allows you to move your battery, ESC and receiver all to the front of the rig. 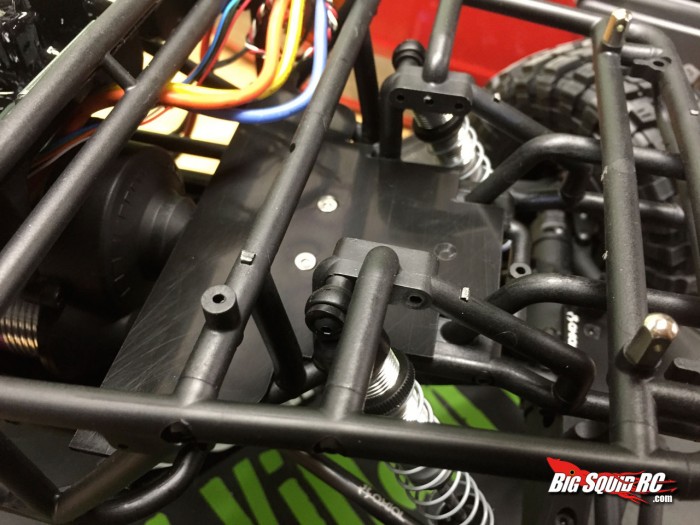 My electronics tray had to be re-drilled as it appears that Axial has revised the electronics mount in the Spawn. No matter, it’s easy to mark and drill new holes as the battery tray fits very snug with little movement. 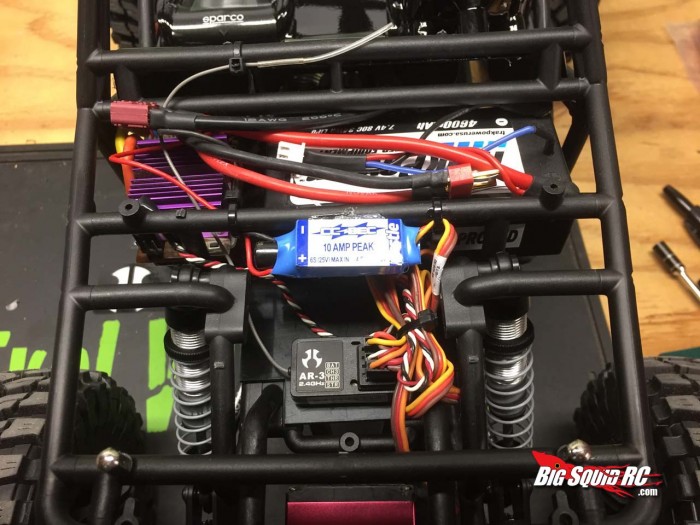 Doing this mod adds all kinds of real estate to mount your electronics. Speaking of electronics, I opted for a 13.5 sensored brushless setup for a good mix of wheel speed and crawling power. If you’re going brushless in the Wraith using a sensored setup is important to give you the control needed for crawling. For the servo I installed my ever reliable JR DS8711 servo paired with a Castle 10 amp BEC because this 400+ oz beast would make short work of the internal BEC in my speed control. Also the 8711’s red heat sink body goes nice with my color scheme; fashion and function! 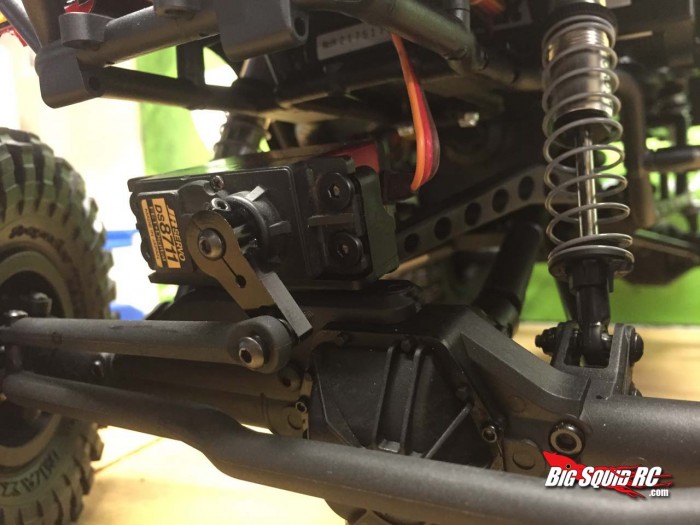 With the battery moved forward the back of the rig looks a little funny. I opted to remove the stock battery tray from the rear and install this lexan dress up piece from DinkyRC. The “Drop Box” is a vacuformed lexan tray to give the rear of your wraith a bit more of a scale appearance. The simulated diamond plate looks pretty cool in the back of the Spawn. 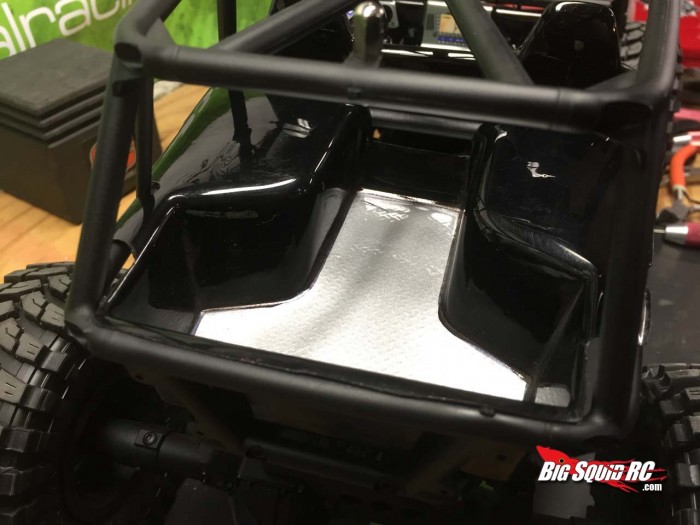 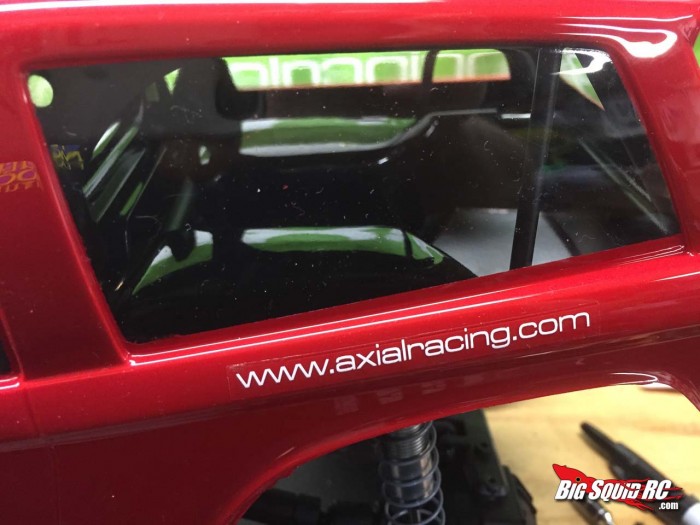 Another mod I did was to use a Traxxas battery hold down kit (Part number TRA3727a) that has these great little body clip posts. Folks have been using them for a while to do the hinged hood mod on the original wraith but the thought of removing 4 screws to access the battery or electronics just didn’t appeal to me. I used 3 of these little guys to make my Spawns body super easy to remove. Great low cost mod. 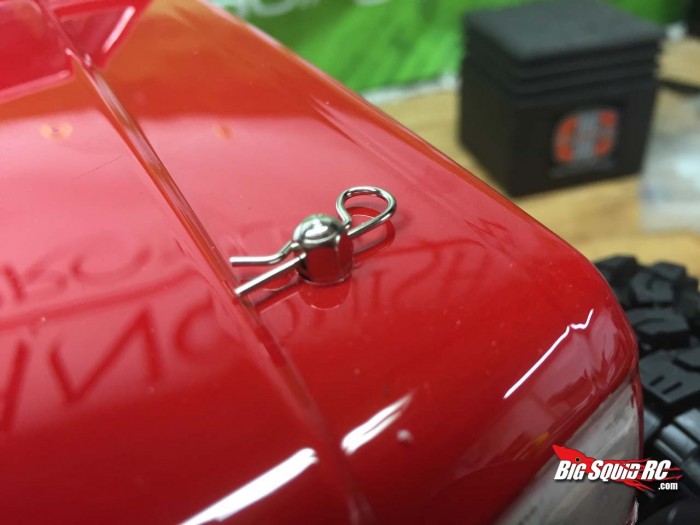 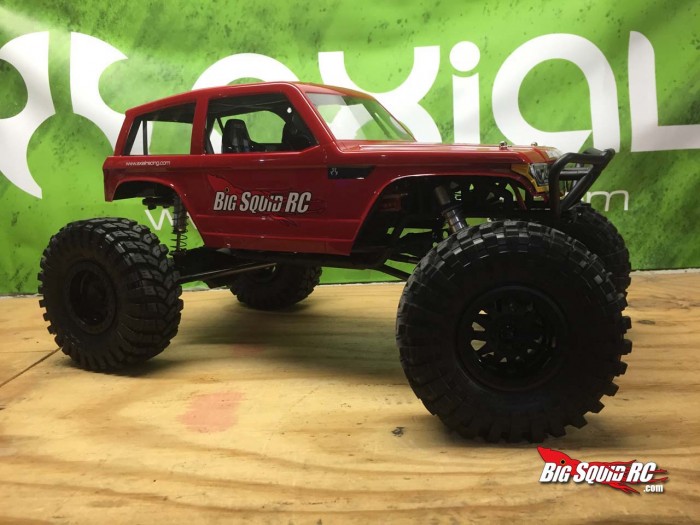 Well that’s about it for the build up portion of the series. Its time to go get this thing dirty! We will check back in once we have put it through its paces and see how it holds up. I have some great mods lined up for the next volume. Thanks for reading guys, we will catch you on the next one!

To check out some of the performance goodies available from Crawler Innovations for your Wraith click here.

To see some of the scale goodness to dress up your scaler check out DinkyRC here.

Want to find out more about the Axial Wraith Spawn? Click here.