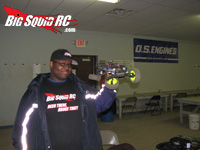 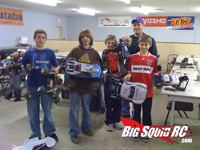 I normally don’t post stories of us out bashing the night away, but this one had so many interesting things, I felt compelled to mention it. It started out when I get a phone call from Kierre seen in the left picture showing off his winning… err loosing Slash after one of our famous demolition derby improves, anyway, he calls me up and says ‘I think I want to attempt to rent out the track, are you in?’ Since our track has a really good rate for full track rental on Monday nights, I say sure why not! We each make a few phone calls, and suddenly we have a big enough group to break even on the track rental, and a small enough group to actually enjoy the evening to ourselves. You know how Cubby has been ranting and raving lately about all the ‘local racers’, I can’t agree more with him, but it’s nights like these where you really realize how much more fun our sport is without those guys around!

Not one time did I hear someone raise their voice, or yell at a marshal, see them throw a vehicle or get into a confrontation about being cut off in a turn. And EVERY open practice, yes I said PRACTICE night, I see that. I see some moron on the drivers stand cursing out a marshal because he didn’t get to his vehicle fast enough, or he put it down in the wrong spot. I also didn’t see any near death collisions from the same local racers because they couldn’t/wouldn’t’ slow down over a triple when there was a marshal out there trying to rescue a car, and he decided he would rather take the chance at taking the guys head off with a 1/8th scale then loose his 2 seconds of lap time DURING OPEN PRACTICE! You also don’t see those morons down there marshaling after their runs! Everyone was super friendly! Any time there was a broken vehicle in the pits, people were helping each other get back out on the track, helping fix vehicles, helping by donating some extra parts they had in their tool box, doing all the nice and friendly stuff you rarely see on a open practice night! Ok, I’ll get off Cubby’s soap box before he knocks me off it, but seriously people have fun in the hobby, that’s why we do it! When’s the last time you saw a dad and his kids (and his kids friend) having a fun evening at the track?! It’s rare, but I snapped this shot of Paul and his family enjoying the evening of bashing.

We did all of our usual basher fun, like full track tag (exactly what it sounds like) someone is it, and they are it till they tag (ram) another vehicle.
Full track demolition derby, last car able to drive away wins.. congrats to Bill for winning tonight, Congrats to Kierre for taking the most damage! After we brought our vehicles in from the demo derby, someone came up to me and said ‘I can’t believe you guys did that! I could barely watch! I usually don’t even take my car out on practice nights because I’m afraid I’ll break something, or someone will run into me and break it’. *sigh* Those 10 or 15 minutes of us chasing each other around on the track, and ramming into other vehicles at high speeds brings SO many smiles to our faces, and the faces of others watching. Yea we break a lot of stuff… but wow is it fun, and a good way to release some tension! I highly recommend it. Too many racer shelf queens out there! 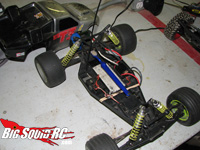 You want to know what a basher vehicle looks like, notice anything weird in this picture? I took it because this is the FIRST time I have ever seen someone use a tooth brush as a battery strap! It worked for a while, but it didn’t last all night. We do tend to be a little tough on the cars. Great idea though! Might have to add that one to our basher tips!

Lastly, I wanted to mention that since it was a private track rental night we didn’t invite that many people to keep the numbers low enough for us to relax and have fun, I did notice something very interesting, that 4 out of 10 people were running Tactic Radios! You can read our fullTactic Radio Review here. I’d like to think Big Squid RC has something to do with this, and we might since everyone at the track tonight was a Big Squid RC reader, but it’s also possible that the Tactic might just be the next Ice Charger! Think about it.. when is the last time you saw near 50% of the drivers using the same thing? (Not including a Slash). The Ice charger is the only thing that comes to mind! If you haven’t read the Tactic review, or heard of the radio, check it out! It looks like it’s getting popular quick!

Ok, I’m done ranting and raving before Cubby thinks I stole his job! LOL.
Support your local tracks and stuff, err something like that! 😉
Brian