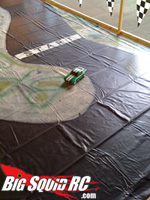 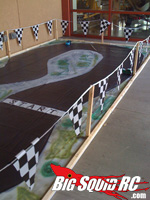 So last weekend I’m looking through the newspaper, cutting coupons or something when I get to the Bass Pro Shop ad. I flip it open and right there on the inside is a picture of one of those 1/18th or 1/28 scale micro X-Mod style tracks, you know the ones with the red and black floor tiles. Under the picture it says bring the kids to come race on our RC track! WOW I thought to myself.. this is pretty cool Bass Pro Shop is hip to the RC scene? And thinks showing it off will bring in people? I have to go check this out! So I grab Mini Squid (my four year old) and head down to the store. We go inside, the place is packed! After looking for the track for while, I finally find an employee who tells me the track is setup outside, around the side. AWESOME! This is gonna rock! So we venture outside, walk around and ‘ta da’. Possibly the most pathetic attempt at RC I have ever scene. Where’s the XMods track? Where’s the 10 cars it showed in the pic?! They had two cars. The Nikko Fast and the Furious vehicles! Not even the 10th scale ones.. these were like 1/18th scale.
The lady walks up to me and says ‘Would your son like to try one?’ Even my four year old looked disappointed. LOL. She hands him the controller, and says ‘Please don’t crash into the sides, these cars break easy’. Ok.. seriously? You just handed a 4 year old a RC vehicle, and told him not to crash? To make it worse, these cars sucked so bad, the turning radious wasn’t tight enough to actually make a turn on the track without backing up! Mini Squid lasted about 10 seconds before running into a wooden barrier. The bumper fell off, and the hood popped open! I laughed. The lady seemed really upset that I let it happen. I brought the car over.. closed the hood, and sent it back out. 20 seconds later..crash… pop! Now she’s pissed! haha.. This goes on for about 2 minutes then Mini Squid hands me the controller, and says ‘this car doesn’t work’. I drive it back around.. fix the hood.. hand the lady back the controller and we walk away.
Now it’s not her fault that the toys suck, or even that the track sucked.. but someone somewhere down the line had a epic fail. I appreciate the fact that a company so big would entertain the thought of RC vehicles bringing in the people, great job on getting the word out about RC, but then to hand people these junk toys? Come on now.. A for Idea.. D for effort!