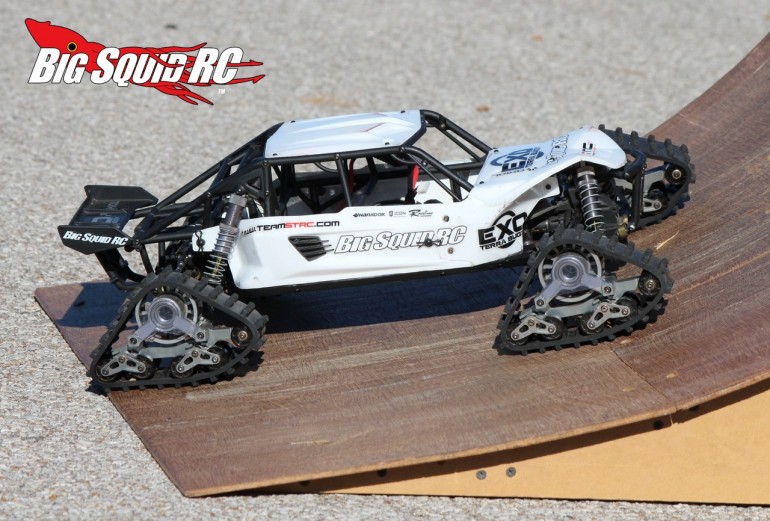 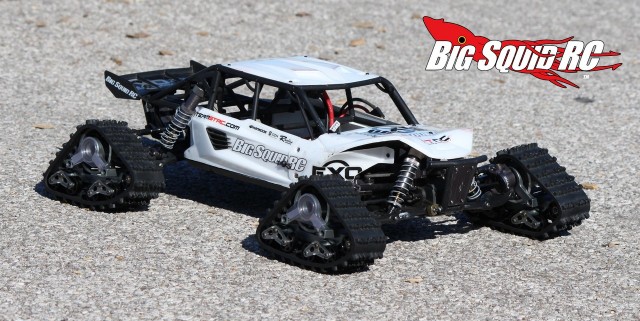 For a long time THE Cub Reporter and I have been wanting to buy some tanks, hop them up, and do some serious bashing. The tanks had to be durable, go at least 20 mph, and be able to huck big ramps. Needless to say, we didn’t find any that would work for our demands.

What do we do when we can’t find something that will work? We make our own, here is our BigSquidRC project vehicle – the Axial Exo TERROR Buggy.

Our project started life with our well worn review machine, an original Axial Exo Terra Buggy kit. Its life has seen lots of ugly, from our normal torture tests to 2 tours of duty as an iHobby demo vehicle. Thankfully it is up to full combat status with mods from ST Racing Concepts and RPM Products.

Next up was a call to the crew over at RC4WD for a set of their Predator Tracks. RC4WD does not make an adapter kit for the Exo, so we knew it was up to us to make them fit.

With all parts in hand, it was time to spin some wrenches. Step 1 was a rough test fit. We found out the input hex on the Predator tracks was the same size as the wheel hex on the Exo, 12mm, but we needed wider/thicker hexes for clearance reasons. The fix was easy enough by simply bolting on some wider hexes from an RC4WD Predator adapter kit for an Axial Wraith.

Step 2 was to limit the articulation of the tracks. Without limiters the tracks would just spin around the axle like an extremely unbalanced tire. The fix for articulation was actually fairly simple. In the rear we threaded cap head screws into the pre-existing holes in the hubs, and longer grub type screws into the front. The screws, front and rear, went into the holes normally filled with grub screws to keep the hinge pins from falling out. A bit of grinding and bending was needed to tweak the articulation on these.

Next we had some binding issues. We installed some shims behind the axle cross pins of the wheel hexes, which helped in one aspect, but we also had to do some Dremel work on the inner supports of the Predator tracks. We also had to ditch the end caps on the tracks. All in all, the project wasn’t super hard, but there is a heavy dose of custom work involved.

We were told be multiple people that our project just would not work. In the end our 3S Dynamite Lipo, Castle 1410 powered TERROR buggy topped out at 26 mph and could indeed pound big wood ramps. It tore across grassy fields and threw huge rooster tails on dirt.

Turning was not nearly as bad as we expected it to be. The TERROR Buggy basically drove like an Exo with very hard tires. Because of the track system, our TERROR buggy got very little mechanical grip on dirt or pavement, drifting around corners. On soft surfaces it didn’t dig in and bury itself, it stayed on top and simply hauled butt.

One of our biggest concerns going into the project was being able to keep the tracks on. That turned out to be a non-issue, at least for us up to 26 mph. We did throw a track twice, but that was at lower speeds and caused by the loose mulch we were driving in, not by the tracks de-railing themselves or by them stretching at speed.

We did have one recurring problem, temperature of the power system. Even when rolling freely for a track system, the tracks present a lot more resistance than a normal set of wheels and tires. We were thermalling out in just over 5 minutes, a problem that could most likely be fixed by running 2S instead of 3, gearing down, and/or installing a Mamba Pro with a 1415 motor.

Our “Exo on tracks” project massively exceeding our expectations. The TERROR is a total animal on pretty much any surface and it was shocking that it could make short work of the double jumps on the local racetrack. It took some time to get the bugs worked out, but once done it turned out fast and handled better than we expected. A normal Exo is faster and handles better, but it certainly isn’t the beast, or the head turner, that the TERROR is.

Check it out in action! Make sure to watch it HD!