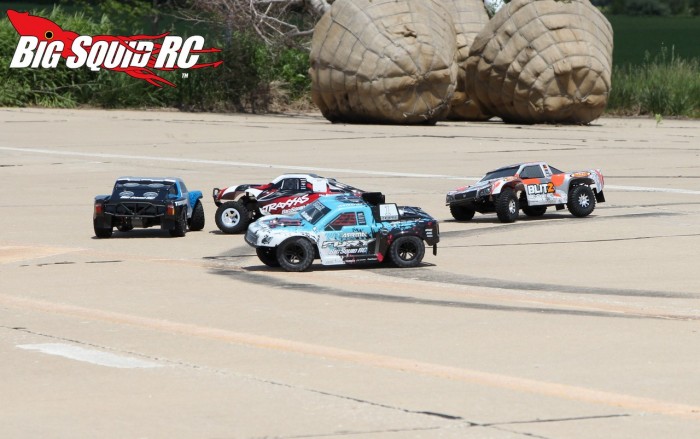 While none of the short course trucks in our shootout were specifically designed for on-road use, if you are a true basher all of your trucks end up on pavement sooner or later. Heck, some bashers only run their off-roaders on pavement. For our pavement testing we allowed all our test drivers to go back-to-back with each truck until they were able to rank them from best to worst. They were told to consider power, turning ability, and general driving characteristics for their rankings. After loads of pavement driving this is how the trucks stacked up-

Notes-
The Traxxas Slash was voted unanimously last by all of our testers. Why? Its soft suspension (that works so well on dirt) caused it to traction roll like crazy on pavement.

In third place was the ECX Torment which received one first place vote and three third place votes by our drivers. The ECX drove well on-road and did not traction roll. It landed in third because it wasn’t as agile as some of the other trucks in the field and its tires did not have a lot of grip on-road.

Second place belongs to the HPI Blitz with one first place vote, two second place votes, and one third. The Blitz didn’t traction roll and had a nice controllable turn-in at corner entry.

The winner in this category was the ARRMA Fury which received two first place votes and two second. The Fury was exceptionally easy to drive, yet quite agile. Also, the Fury’s suspension was tuned the best of the bunch for pavement work and its tires did a nice job of finding traction.

From ultra traction pavement to the dirt.. check out the Loose Surface Driving category.