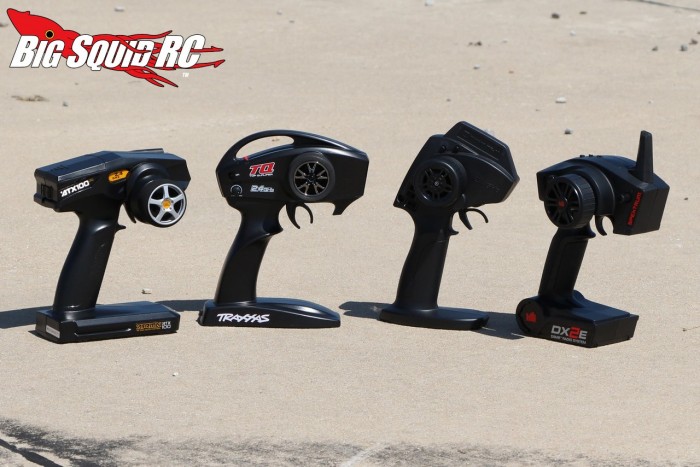 We didn’t used to include this category in other shootouts, but it because blatantly apparent that we needed to include it in this one. Why? Because a couple of the radios didn’t really have the range needed for the type of bashing that we do. So not only did we take range into account in this category, but also ergonomics, radio features, and looks.

There was a day when the Traxxas RTR radios had outstanding range, our shootout was not one of those times. The radio on our Slash had a radius range of only 408 feet (That’s 204 feet away from you) , which wasn’t long enough for our typical driving, and reversing the servos was a pain. On the upside the ergonomics on the new TQ are far superior to older versions.

In third place was the radio that came with the Blitz. The Blitz’s radio had a radius range of 647 feet, which was quite usable, but what brought it down was its look (which was downright ridiculous) and feel. It felt the most “toy like” of any of the radios in the shootout and its hard plastic wheel didn’t win over any fans.

Second place went the Spektrum unit that came with the Torment. Radius range on the Spektrum was a paltry 480 feet and nobody liked its hard plastic wheel. On the upside we really liked its look, its rubber handle, and its ease of use.

In first place we had a runaway winner, the radio on the Arrma Fury. In fact, we were all shocked at the ridiculous amount of range its radio had. We measured its radius range at 2016 feet (making for a diameter of 4032, FYI a mile is 5280), which is a new record for any radio we’ve ever tested. Its range was so long that there was no way you could still see the truck, we used cell phone communication to keep driving until it ran out of range. Also on the plus side was its looks and its ergonomics (which we felt was the best of the bunch).

Everyone wants to catch some air! Next up is the Jumping category.