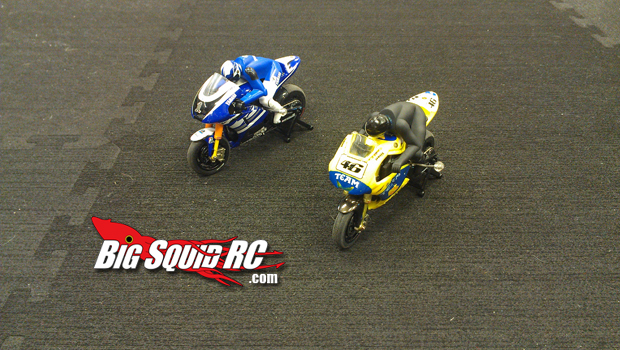 Well to say that I was excited to see that Kyosho was bringing out a Mini-Z Motorcycle would be a major understatement. Then you toss on the layer of details that Mini-Z is known for and that it was going to be a replica of the Yamaha M1 and I pretty much had to buy a bib cuz I was non-stop drooling at every pic I could find. Being the type that can’t stand running the same rig as everyone else has I had to put my spin on it. For me there is no better rider than Valentino Rossi when it comes to on-road motorcycle racing so I had to pay homage to him on this one. Like most involved in this Hobby I love all things with wheels and details and some of what I collect are scale motorcycles. Maisto is a huge supplier of said bikes that can usually be had for under 5 bucks at you’re favorite toy stop. Doing a quick search I found they made a copy of his 06 ride with Camel being the lead sponsor. Oddly enough I didn’t have these in my stable yet so I ordered up a couple. The details and fit and finish are really good on these scale beauties right out of the box so the only problem was could I make them fit onto the Mini-Z Moto that is already too small to possibly have as much going on as it does. Keep reading to get the details of the build.. 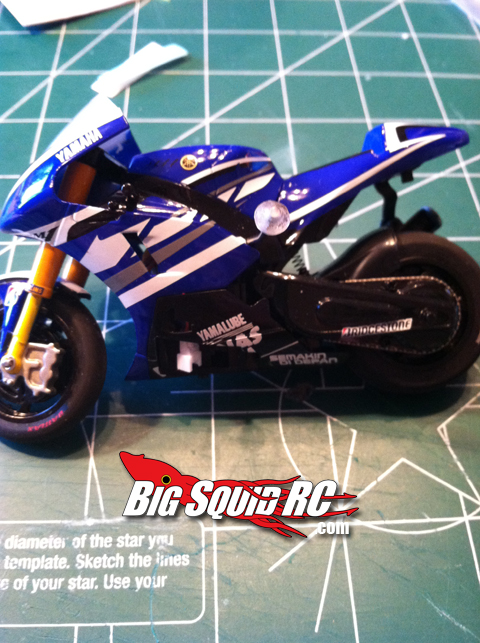 So first things first was disassembling the Mini-Z, get yourself a quality set of Phillips head screw drivers and you will be fine. The entire lower front cowl and windscreen are one piece similar to the real deal bikes. Then there is a gas tank cover and separate seat and tail section again very close to what is stock. Dissecting the Maisto bike was a slightly different story they never really had any intention of the bike having to come apart so the front cowl is only really held on by two pins on each side of the fairing. On this version the gas tank is all one piece with the seat and tail section. Since these are both based on the M1 bike and 1/18th scale they are remarkable close to the same size but the Maisto is smaller!!!  Oh and did I mention the Mini body work is all plastic to save weight and the Maisto’s fancy tank/seat/tail peice is all Die-cast and that in itself weighed almost as much as the entire Mini Moto before I started… Doooh. Honestly I had some major concerns that putting that much weight up high was really going to  throw low CG to the wind. 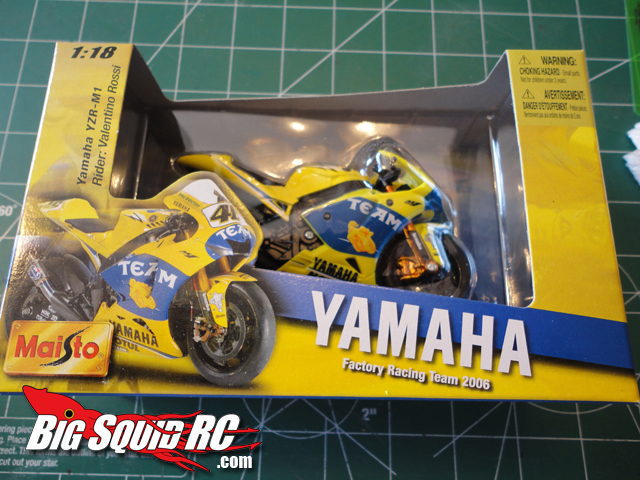 Couple things stood out to me right away that I was not happy about on the Mini once it was in full autopsy mode. The power wires that go to the switch and complete the battery circuit had been pinched in several spots under the stock panels and let me tell you when you are working with 20ish gauge wire it doesn’t take much to cut clean through it. Then that pesky power switch for me looked a little odd the way it was mounted horizontally forcing the wires to take a hard 90 to get back to the Main board/battery.  This was a no brainer flipping the switch vertically would make the switch more hidden and have much better wire routing. There actually is some pretty solid chunks of plastic on the main chassis and I thought since there is no extra room here what so ever I could put a 3/16″ hole in the chassis for better wire routing and to make transplanting the body that much easier. 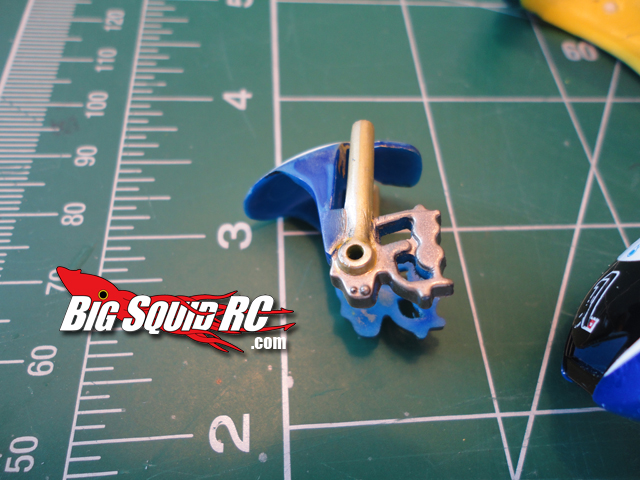 Like I said the panels from stock to Rossi are similar, BUT SMALLER. You know when you are doing something 10th scale smaller is no big thing, heck even normal 1/18th cars is still doable. But when you take a body that has less than 2mm of room on it stock and you need it to be 3mm thinner you have to get creative. The stock front panel has slots in it to hold the main board on the right side of the chassis and going thinner was not going to allow me to keep that set up. With better wire routing and a zip tie I thought I would be golden… Uhhh not so much.. Even a less than 2mm thick Zip ties was a show stopper when grafting on the new panels. So when in doubt I always resort to my two best non-living friends… Duck and Eli (that’s short for Duct and Electrical Tape). Using Eli with a  slight amount of stretch I was able to get one good wrap on the board fixing it the main chassis. Let me tell you I was really impressed with myself until I noticed that HUGE (about 4mm) plug for the power connection. Well I have already gone this far so why stop know… quick little tug and I was able to get the connector apart and solder the power wires directly to the main board(kids don’t try this one at home unless you are totally cool with assuming all responsibility if you fry that board).  Ahhh now that chassis is as thin as an Olson Twin after Lap-Band surgery! 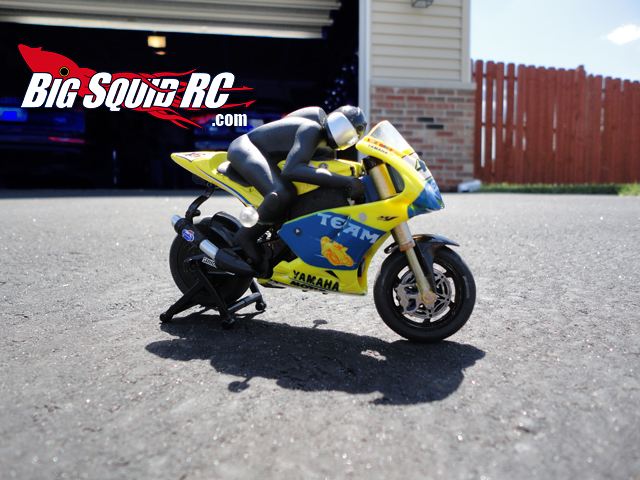 OK so now marrying the new panels to the stock chassis was a little tricky I wanted to use as much of the stock mounting holes as possible… Time to measure 19 times and break out the Micro Drill bit set… slowly and arduously I was able to mate up a lot of the screw holes but in a couple spots that just wasn’t an option. So I went to the chassis with an even smaller bit and basically slowly made my own threads in the chassis for the new screws I had to add. Again … steady hands … lots of measuring .. stay off the caffeine, did I mention steady hands and Alt Nation thumping in the background to help my focus. That Die-cast top piece took some serious Dremel time to get the inside as thin as possible to A: lighten the load and B: make some room. The lower fairing actually had to sit about 3mm higher up on the chassis for clearance and to keep the look spot on so I had to notch the bottom to get it to suit my needs. 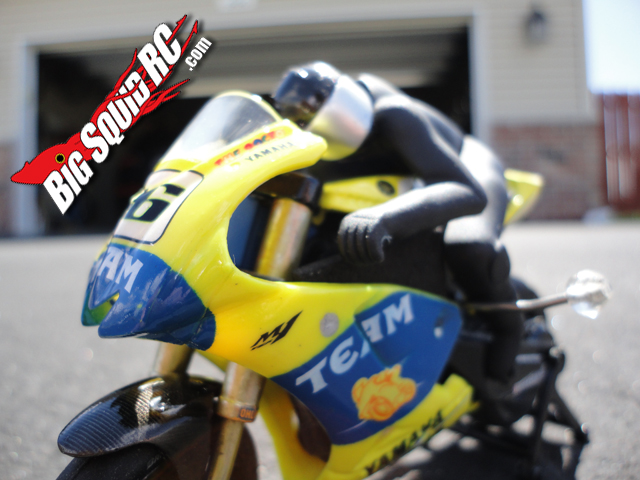 Again the Maisto bike is a beauty but was never intended to be grafted onto a working bike so it too had to be trimmed, sliced, filled  cut up and re-glued to fit just the way I wanted. Once that was all done the stock lower fork/fairing/brake assembly needed to better match the new theme. So I basically sanded off all the blue color and also put it on a trimming plan. If you look close the stock Calipers have nice details but they did not remove the excess plastic from the fork mount. Couple of strategically placed 1mm holes some handy hobby knife actions and the micro files and viola! The entire front wheel is actually cast adding to the stability of the bike, but the rotors are also in that cast and to save some time the painted the whole thing black. Simple fix on this was to take one of my sanding files lightly to just the rotors and presto the metal comes through and really sets off the contrast/scale look.  So what to do with the wheel fairing? Well I just got some cool Alcad 2 Chrome paint… Sure why not… First I laid down some good coats of Black Alclad per their instructions then I laid on the chrome… Not bad I thought …  but this is a MotoGP race bike not some poser chromed out v-twin that is all show and no go. So then I was thinking I normally use shelf liner or drywall sanding screen for a Carbon fiber look but this is way smaller than anything else I have tried to have a CF look. So in steps  Wifey… “You should check that craft box I think I have some thin ribbon that has that look”… Que? Ehh why not its only paint right? so once the Chrome was all set and dry I strategically place the ribbon on all sides and slowly airbrushed black over the chrome. Once I let it set up and I had a good look …sweet Jesus.. I don’t think you will find smaller painted on CF on any other RC Car. The look is just amazing and most pictures don’t do it justice… huge Props to Wifey for that one.   Then I took all plastic body panels (excluding the Die-cast tank/seat/tail) and laid some really good coats of clear on them. Then having to please my inner OCD side I went back and had to ditch the orange peel so I wet sanded it with 2000 grit and hand buffed it all back to a lustery finish.