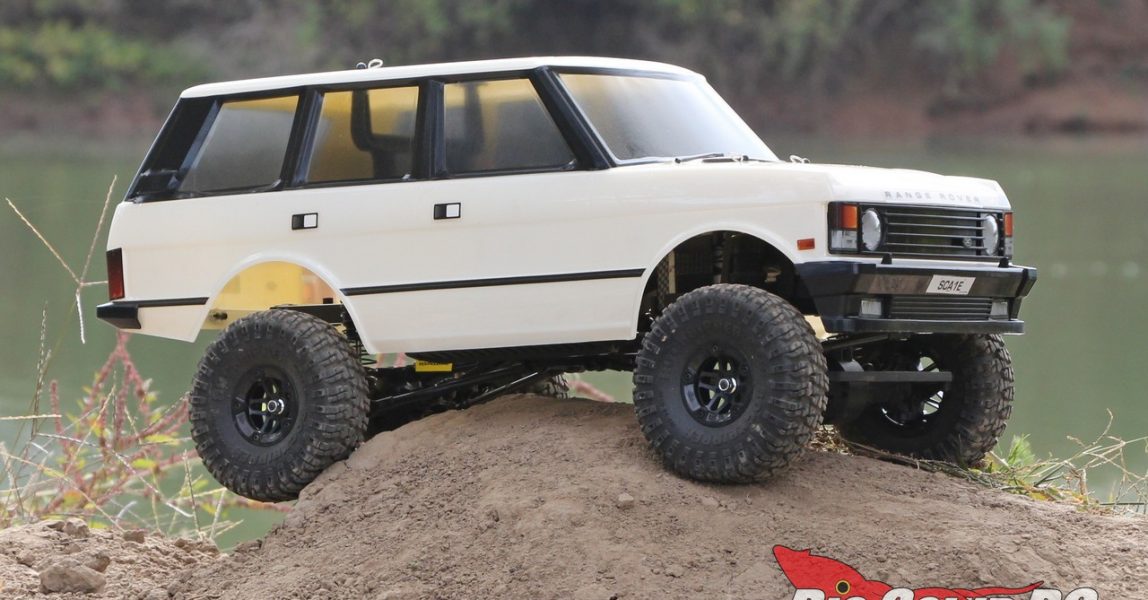 The crew at Carisma have been putting out highly scale realistic cars for decades. Ivan and his crew have always gone a bit above and beyond to ensure their products not only performed well, but also looked immaculate. Case in point is Carisma’s new 1981 Range Rover scale crawler. The Range Rover sports a classic off-road look with a seriously capable SCA-1E chassis. How does the Carisma Range Rover stack up against an impressive heap of competition? Read on to find out…

What’s Needed To Complete: To get the Carisma up and running you don’t need anything! The truck comes completely pre-assembled and also includes a 6 cell NiMH pack with USB style charger. Heck, they even threw in some AAs for the transmitter.

Build Quality: We did find one issue with our Carisma and it was in the shock department. One of the rear shocks had excessive friction. A quick disassembly showed some extra flash on a shock piston was to blame. We’ve never seen this on a Carisma before, so we’ll put it down as an isolated incident.

Test Venues: We used Minnie Ha Ha park in Fenton Missouri for the bulk of our testing, but also ran along the Merimac River near the St. Louis Dirtburners track. From sand, to mud, to rocks, to leaves, we drove the Carisma on all sorts of different terrain.

Set-up Notes: How about bone stock? Well, we were close to bone stock I guess. We did not use the included NiMH pack, instead we popped in a MaxAmps 5250 2S LiPo to provide the juice.

Turning: Hey, it’s a crawler with all diffs locked, so don’t expect fantastic steering. However, compared to other RTR rock crawlers, the Carisma had it going on. Its stellar tires and half-way-decent steering servo allowed it to do a fine job of turning while rock crawling. The stock servo is quite slow, but it had more than enough torque for trail driving and light crawling. The stock servo could also easily swing the wheels lock-to-lock on carpet (not all RTR servos can do that). Overall, the Carisma is one of the best turning crawlers that we’ve tested, a shootout would be needed to find out exactly where it would stack up.

Jumping: We did catch a bit of “scale” type air on the Carisma and found out that it is like most crawlers- it does not like to jump. There is very little speed for catching air, and when you do, it tends to bounce heavily on the landing. You can absolutely set it up for bigger air, but doing so will lose much of its trail/scale prowess.

Bumps/Whoops: With a top speed well under 10 mph, the classic Range Rover mostly rolled over bumps. On scale’ish sized bumps, the stock shocks did a fine job of keeping the truck under control in the rough stuff.

On-Road: The Carisma was definitely not designed for hardcore on-road use. Its low top speed keeps everything quite sedate on pavement, go off-road if you want to get your money’s worth out of this scale rock crawler.

Grass: With grippy tires and full time 4wd, the Carisma had no problem chewing through grass. The Carisma ignored short grass and seemed to truly enjoy diving into the deeper stuff. If your only driving area is grass, the Carisma will be a beast.

Tires: Nice! The stock tires come in slightly softer rubber than most RTRs, which definitely aids the truck in getting grip. The scale tread design works well on softer surfaces, which can also be said of its soft foam inserts. Overall, the stock tires are some of the best that you will find on an RTR. Also, the stock 1.9″ beadlock wheels look awesome and perform like a champ while off-roading.

Power: For some reason, it seemed like the stock 35 turn motor had more rip than we are used to seeing from crawlers. No, it doesn’t have crazy 6S power, but it seemed to have slightly more zip up top than other RTR crawlers. With that said, the programming for the low end isn’t as soft as other crawlers. The low end has a bit of authority, the mid-range blows by nearly instantly, then the truck tops out quickly with a surge in its top end. For normal crawling/bashing/trailing, we found the gearing to be right in the ballpark.

Radio: While most RTR radios leave a lot to be desired, the Carisma wasn’t bad. We were big fans of the handy grab handle on top (nice to have in thick brush, during water crossings, etc) and we never had a glitch during our test period.

Broken Parts: What did we break on the Carisma? Not much! However, the first breakage our Carisma suffered is a common one for RTR crawlers- the stock plastic servo arm. Ours stripped on the third pack. Metal arms are super cheap and easy to install, pick one up with your truck to help bomb proof it before you drive it.

One of our test drivers thought the Carisma came with metal wheels. This version does not, but there is a version that does. The bigger point here is, the stock plastic wheels look AMAZING.

The truck comes with various extra parts like side mirrors, bumpers, etc, to help you customize your rig the way you want it.

Best Mod: While the stock tires are some of the best that you’ll find on a RTR, some upgrade Pro-Line kicks will instantly make the Carisma much more capable out on the trail.

Time To Bash: A The Carisma comes with everything needed to run right inside the box. Crack it open, charge a pack, hit the trail- easy peasy.

Workability: B The Carisma sports a nice open layout and decent quality hardware, thus making it quite easy to spin wrenches on.

Car Show Rating: A Carisma’s take on the 1981 Range Rover came out beautifully. Its wheels, its tires, as well as its body, are quite on-point.

Bash-A-Bility: B Our test rig held up well, despite our test drivers constantly wanting to send-it.

Fun Factor: A For a scale rock crawler, our test crew felt the Carisma deserved an “A”. Whether rock crawling, trail driving, or just driving around in the backyard, our test drivers always seemed to have an incredible time.

Handling: B The 1981 Range Rover is easily one of the best turning RTR scale crawler that we’ve tested. It also more than holds its own overall in the rocks.

Value: B For under tree fifty you get a fantastic looking crawler that is also highly capable out on the trail.

Parts Availability: C The SCA-1E platform has been shipping for a while now, so there are parts out there. We did not find any at our local hobby shops, but easily found replacement (and upgrade parts) on-line.

BigSquid Rating: B+ The Carisma 1981 Range Rover is a solid scale crawler that absolutely deserves a spot in your rc garage. It can turn heads with its incredible looks, while also outperforming other RTR crawlers while out on the trail. Pick one up, we are big fans!