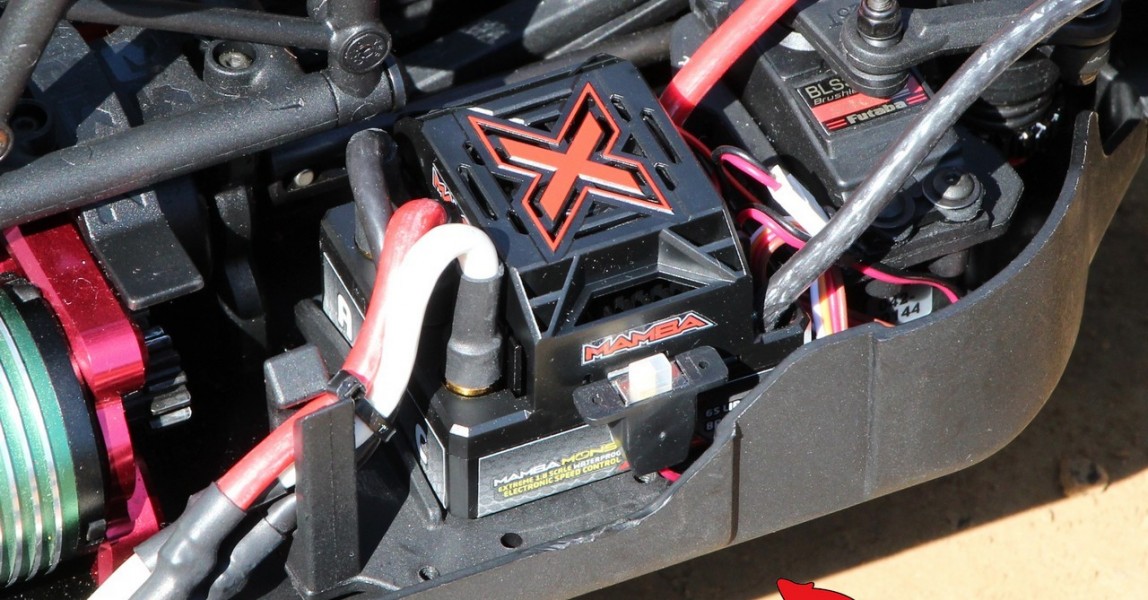 Bashers love power, the more the better, and Castle Creations has long been a source of brushless systems for us bashers. A few months ago they unveiled their new X line up of ESCs which introduced more features and other upgrades. Myself along with the rest of the BigSquid Bash Crew has been beating on the Mamba Monster X to see if it could stand up to what bashers would throw at it every day. How did the Monster X hold up? Read the review below to see what we found out and if it is worth your money.

Set-up & Test Crew Notes: The Bash Crew used the Monster X in three different cars, the Durango DEX8 and DEX8T, plus an ARRMA Kraton Monster Truck. Various servos were used from Futaba, Hitec and Savox. We ran the Monster X on both 4S and 6S, with the 4S being a Maxamps 6500 pack, while dual Reedy 3S packs were wired in series for 6S. 6.5mm Castle connectors were used throughout the entire test. We only ran Castle sensorless motors during the test, a pair of 2650s and one 2200. We did not test it on a sensored motor or its telemetry. Three different transmitters were used, a 4PKS and 4PX were used from Futaba, while a DX4S was used from Spektrum. Our test crew included Robbie G, Cubby, Sam The Noob, and myself, while Tim Mohr (T-$$$) was excluded because of his long term association with Castle Creations.

We liked the new Auxiliary function that was included on the Monster X. What is that? The X comes with an extra wire that plugs into the 3rd or 4th channel of your receiver. Once turned on through the Castle link software, you can change various settings from your transmitter while driving. We programmed our X to reduce the throttle level from 100% to 10% when we hit a 3rd channel switch on our 4PKS. This worked liked a charm for handing off an over powered monster truck to a noobie.

The data logging feature is also very nice. You’ll have to plug the ESC into your computer to check out the data, but it was cool to see how much current the ESC was drawing, the motor’s rpm, etc.

The Monster X was quite smooth when pulling away from a dead stop. Some testers thought it was smoother than previous models from Castle, I felt it was on par, if not better than any other ESC on the market. Castle has made great strides with how smooth their ESCs feel on the track.

Gone is the old Castle on/off switch, it has been replaced with a new unit that comes with a rubber boot to help keep the elements out. On the old Castle switch, or really the switch on just about any brand of ESC, dirt gets in and ruins it. We didn’t have a problem with the new Castle switch during our 2 month test period.

The Monster X is waterproof so we hit plenty of water and drove in lots of mud to check it out. Our test unit suffered no problems after several good dunks.

Older Castle units sometimes had BEC problems when run with certain servos, we experienced no such issues.

While the form factor of the Monster X isn’t small, we didn’t have a problem finding room for it in the 8th scale test platforms that we used.

For raw power output we tested the Monster X back-to-back with another 8th scale ESC that we reviewed a few months ago. From a dead stop both ESCs felt similar, with the Castle feeling smoother through the mid-range and the Castle had a bit more zing on top. For straight up power, the Monster X was indeed a beast, turning all three of our test cars into insanely overpowered speed demons.

The Castle also ran about 15 degrees cooler than the ESC we back-to-back compared it to.

The Monster X allows you to go from reverse to full balls forward if you choose, which of course we did on a number of occasions. While hard on the truck, it sure is fun!

The brakes on the Monster X are King Kong like and felt a bit too aggressive below 1/2 trigger input. We softened them up a bit via the Castle software and were very pleased.

While programming and setting up the Monster X is easy enough, we would like to have seen an option to use a smart device with it. Changing settings from a cell phone would be the ultimate in ease of use.

Car Show Rating: B Black is still the “cool” color and the big red X on top added some style.

Bash-A-Bility: A Even when driven by the the lunatic BSRC Bash Crew, we failed to fry the big Mamba.

Power: A Castle is probably best known for one thing, raw power. The Monster X proved to be no exception.

Fun Factor: A Every single one of our testers had a blast driving our 6S test cars around on the Monster X. Some people say too much power is a bad thing, we say it is smile inducing.

Value: B The Castle isn’t the least expensive ESC on the block, but it has the power and features that cheaper units do not.

Big Squid Rating: A- The Castle Mamba Monster X is arguably the best ESC in the 8th scale category. It is smooth, it can take day after day of 6S use, and the power that it is capable of putting out is insane.