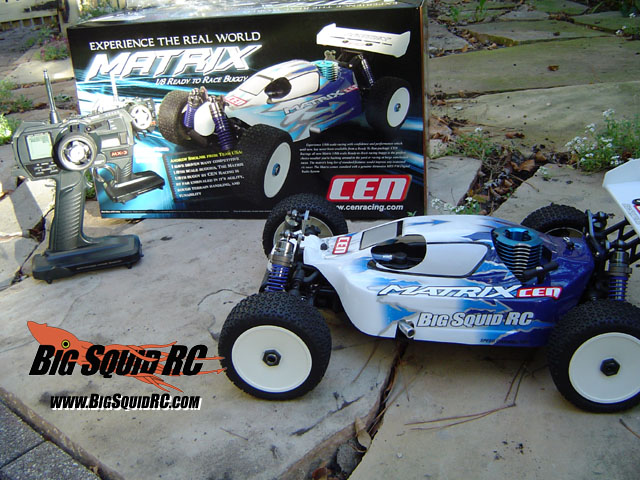 A few years ago, I remember talking with some CEN employees, who were telling me that CEN was finally going to get serious about RC. They had been in the RC business for a while, and they had some decent RC vehicles, but nothing really amazing. When the Genesis came out, they turned a lot of heads. They put themselves in the spotlight, and said ‘Hey look at us! We are different!’ They sure were! The Genesis was a monster of a monster truck, and it was different! Now CEN has brought us The Matrix! An attempt at a serious 1/8th scale buggy that looks to make some big waves in the RC race scene. 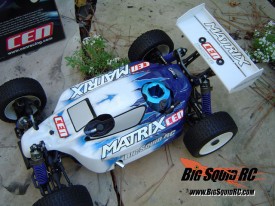 So can the Matrix be as different and as good as the Genesis? Those are some pretty big shoes to fill. (Get it? Genesis, big… never mind) To answer that question, yes, yes it can. The Matrix comes with little more then seen in the first picture. This is fine with me. I have several fuel bottles, I’m not going to use some old generic AA batteries, and I really didn’t need another 17mm wrench. So if leaving all this stuff out saves me a few dollars, or gets me some better parts, then good for them! I have to admit, I would of liked to have gotten a CEN sticker sheet, after all, as a basher that body isn’t going to last me forever, and I would gladly put a CEN sticker on when I need a new one. 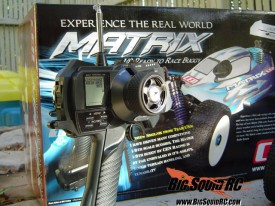 So instead of stickers, I get this. An Airtronics MX-3 FM Digital Radio? I suppose that’s a fair tradeoff. Remember when CEN said they were going to do things different? This is where it starts! A radio that does not suck! (Read our MX-3 review here.) I would say this is probably the first time in history that a RTR vehicle did not come with a ‘throw away’ radio. Yea, yea, I know there are a lot of you bashers out there that are still using the $20 radio that came with your monster truck, and that is probably just fine. But if you are a basher, or a newbie that is thinking about maybe getting into racing, and maybe going to check out your local track action on the weekends, you are going to want a radio that is at least this good. Is it the best of the best? Is it what all the pro’s use? No. But it’s a good start! And this is a nice trend that we see everywhere with the Matrix. 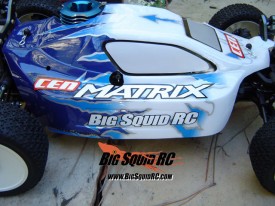 Ok, I’m going to go on a little mini rant here. I’m sorry, but it has to be done. Out of the box there are a few things that bug me. The biggest being the hole that needs to exist for the throttle linkage to move in and out. This bugged me for all sorts of reasons. The first being that it’s extremely exposed. As a basher or a racer, I am going to end up upside-down, or have another vehicle on top of me spinning its wheels, or something similar. I don’t need my throttle linkage getting stuck in the dirt, or covered with mud, or ripped out by someone’s tire. To make things worse, the body not only didn’t really fit well, it was getting hung up on the linkage. The hole just wasn’t big enough and needed some work. I made a bigger hole, and it’s not a big deal to do, but every time I put the body on, or take it off, I still have to wrestle with getting the linkage to poke thru. As long as I’m in rant mode, there are a few other things that bug me. The battery box/receiver case does not close very tight. Is this a big deal? No, but as a basher who sees a lot of dirt, and not a lot of cleaning time, I really want something a little better sealed. Lastly, I’m not a fan of the air filter. 1/2 of this thing is covered by a big piece of rubber! The filter is nice and big, let it breath a little! OK /end rant. Don’t worry folks it’s all up-hill from here! 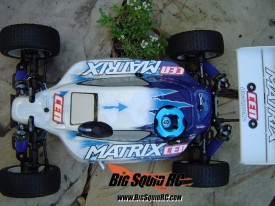 Time for break in! I used my usual 20% O’Donnells fuel (and will probably end up moving to 30% soon). The Matrix comes with a pull start, but I highly recommend picking up the CEN roto-start. This engine has a TON of compression, and for the first 10 tanks, (and even now) I have been afraid of busting that pull string. Once I got it dialed in, the engine normally started on the first pull no problem. It’s all the pulling to just get the engine primed that’s the hard part. Break in went ok, but the engine seems to run a little hot. Even rich it was running hot. I changed out the air filter, and this helped a little. I also believe I had a split fuel tube, which may of also been causing some problems. 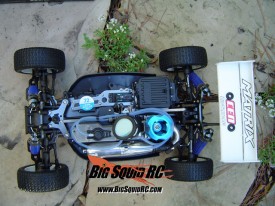 After the break in, it was time to get some true running time. This buggy is FAST! I’m talking Keanu Reeves ‘..Whoa..’ fast! (get it? Matrix..Keanu..bah) Anyway, when I was tearing up the parking lot, I couldn’t believe the top end on this thing. It’s safe to say this is probably the fastest off-road vehicle I own, and it could probably give my on-road vehicles a run for their money. After a few ‘test’ laps on the local track, I decided to really try and see what kind of lap I could pull off. Let me tell you that wall on the huge straightaway never came up so fast!

The stock tires did pretty well on the track, and the servos and radio all did just fine. Being able to dial in all your settings on a stock radio is great! While getting used to it, I slammed many walls, and took many bad spills. I have only had 1 broken front a-arm, and I’m pretty happy about that being the only thing broke because it was from a pretty good crash. Can thank my buddy Gabe for that one. 😉

I have now had the buggy at the track for about 4 pretty solid nights of testing, and have really loved showing it off. After I bring it back to the pit area, there’s usually more then a few people checking it out or asking me questions about it. The most frequent question I get is ‘ok, what here is hop-ups, and what is stock?’ When I tell them that it’s 100% stock, their eyes usually get pretty big. Then to finish them off, I put that MX3 radio on the table and say ‘Oh yea, and it comes with this as stock also!’ and then I duck because usually their head explodes! The parts that come on the vehicle are great. They are all very solid, the shocks are nice and huge (I would of liked to see them threaded, but I’ll live) and it’s over all a VERY solid buggy.

I get a lot of emails, and a lot of questions at the track from people looking to ‘Get into’ racing about what they should get. This is now the vehicle I recommend. If you are looking to get started in racing, and you aren’t rolling in cash and spending $700 on a rolling chassis, this is really a vehicle you should look into. It comes with just about everything you need to be competitive at your local track. I always tell people that racing is almost a 50/50 split. Yes you need a car that can compete, but a big part of getting on that winners stand is skill. If you think you have the skill, or want to find out if you do, this is a car that can compete! 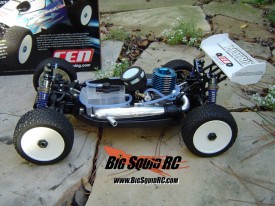 Yes I had a little rant there, and yes I see that list as things that you might need to deal with. But overall this is really a great vehicle, and a good place to get started in 1/8 scale buggy action. It even has a place for a personal transponder! CEN’s pro driver, Andrew Smolnik, has been winning and TQ’ing all over the place with the Matrix which is also good proof that this is a solid vehicle. Lastly, CEN has gone and made a TON of hop-ups for those that think they want to try and get a little more out of their buggy. You have your choice of Carbon Fiber or Aluminum for a ton of parts! Sweet job CEN! Now about those stickers…