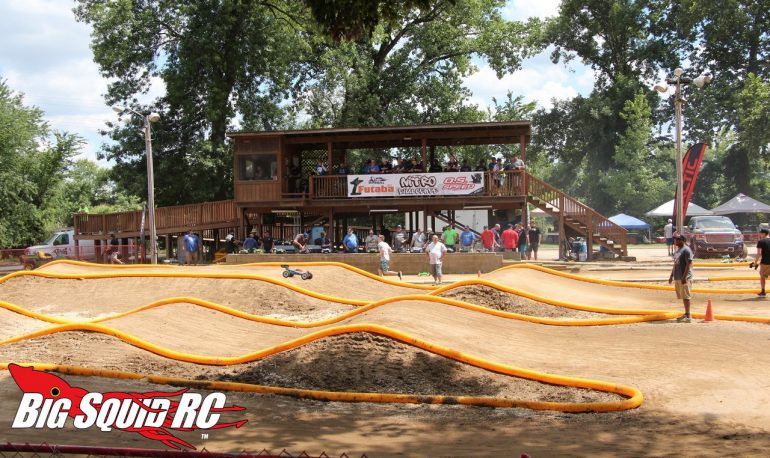 For 2017, once again the St. Louis Dirtburners hosted the annual Futaba Nitro Challenge. The Futaba event is well known as being one of the biggest, and best, nitro races in the United States. This year was no exception as the Dirtburners rc club had designed a great track and made sure the race program went off as smoothly as possible.

Early in the event rain decided to make its way into the forecast. This threw a bit of a damper on various activities on Thursday, but the other 3 days of the event went quite well. The racers went at it hard in qualifying, then in the mains.

The Tony Burton designed track had a good flow to it and held up quite well. The track had a huge triple, a cool step-up, and a step-on/step-off that kept the racers on their toes. The wide lanes and high traction of the track really allowed the competitors to get on the gas chasing after the win.

After it was all said and done, Ryan Lutz was the star of the weekend by winning all three of the most prestigious classes.

Along with the racing, the primary sponsor of the event, Hobbico, held a question and answer session with two of the sports biggest stars, Adam Drake and Ryan Lutz. On top of that, there were loads of prizes from Hobbico, as well as other companies, for the racers.

The BigSquidRC Bash Crew had a great time walking the pits and checking everything out. Our buddy Brad Brucker from Hobbico even showed us one of the new Futaba 7PX radio systems. The 7PX is the newest top-of-the-line radio from Futaba and it did not disappoint. It had an exceptionally nice touch screen display and we were immediately fans of its ergonomics. Better still, it has loads of new features for your custom scale build or even for use when driving tanks! Seriously, we can’t wait to get one of our own to try out on some crazy multi-channel custom build.

We would like to give a huge thanks to everyone at the Futaba event for their incredible hospitality. Like every year, we were stoked to be able to attend and to be able to watch some of the best in the world put their skills on display for our enjoyment. The race organizers are already making plans to make the ’18 version of the Nitro Challenge bigger and better, we can’t wait to see how it turns out!