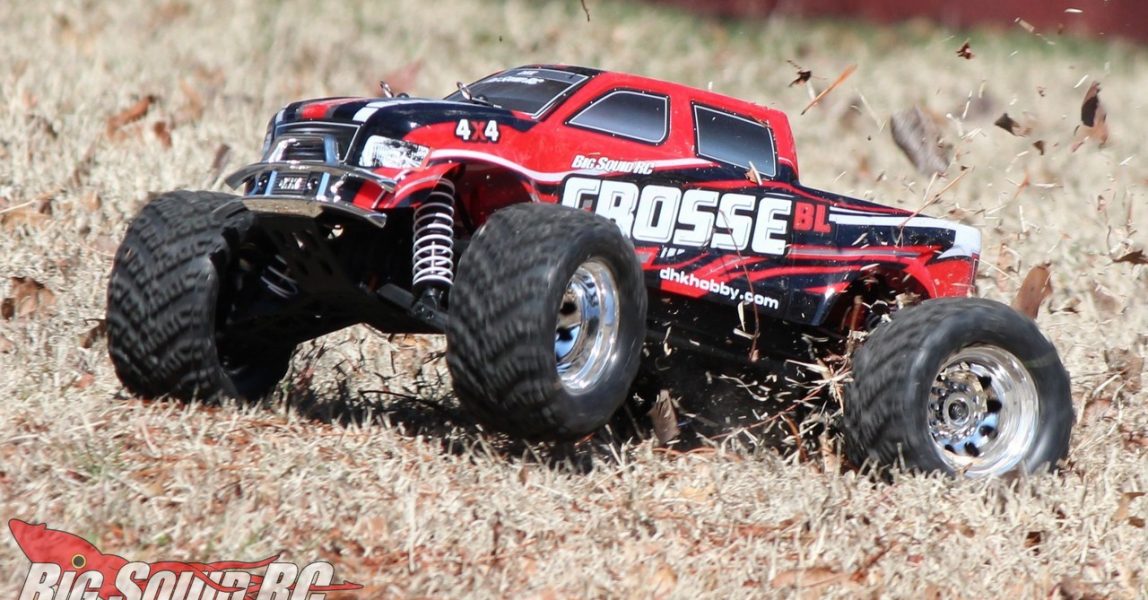 While DHK Hobby is well known overseas, here in America they are just starting to take off. DHK is now carried by HRP Distribution here in the states, thus making it much easier for local hobby shops to stock them. Over the last few weeks we’ve been able to bash and thrash the DHK Crosse BL 4wd monster truck. The Crosse has a classic monster truck look and sports a brushless power-plant under the hood. Is it a good truck for a noobie? How often does it break? How fast does it go? Keep on reading to find out the scoop…

Primary Competition: The Crosse BL goes up against trucks like the Pro-Line PRO-MT 4×4, the ECX Ruckus 4×4, the Traxxas Stampede 4×4, the ARRMA Granite 4×4, etc.

What’s Needed To Complete: To get the truck up and running you will need to supply four AA batteries for the transmitter, plus a battery pack and charger for the truck.

Build Quality: Our test unit was all good right out of the box. We simply couldn’t find any assembly errors.

Test Venues: We ran the Crosse BL at 2 local parks. Both parks were dialed for dirt, mud, sand, grass, and pavement.

Set-up Notes: We ran the Crosse bone stock as it came out of the box. We popped four MaxAmps AAs into the transmitter and used a MaxAmps 2S 5450mAh LiPo to power the truck.

Driving: We found that the Crosse BL was set up really well for new drivers. How so? Well, it had a bit of push at corner entry, which makes the truck easier to drive. It also doesn’t have a lot of side-bite. This means it likes to slide around a bit in the corners, which also helps make it easier to drive for a new hobbyist.

We were big fans of the way the Crosse BL jumped. The Crosse BL doesn’t have crazy power, but it does have solid power for an entry level RTR. When getting ready to hit a jump/ramp we would cruise into the jump at 3/4 throttle, go to full throttle up the face, then go to neutral once airborne. When using that technique the Crosse BL nearly always jumped nice and flat. Sometimes the truck would still get kicked one way or the other because of a rough take-off face. In those types of situations we found it easy to use radio inputs to help level it out. On landings, we found the stock suspension to be damped slightly light, but it did a decent job of soaking up landings.

The Crosse BL was easy to control and drive on pavement. The truck liked to slide around in corners, even on pavement, and was generally a lot of fun to drive. On grass it was even more fun. Where normally the tires would slide, instead they really hooked up on grass and that is where we probably had the most fun driving it. The Crosse BL was a little beast doing informal races in the back yard.

Power: While the Crosse BL is a brushless powered truck, it is aimed more at the entry level crowd instead breaking speed run records. The truck is good for about 26 mph on 2S out of the box, which is pretty much the perfect speed for a noobie. Not all the time, but occasionally the truck would have a slight cog from a dead stop, but its power system was smoother than most after that. The truck had nice low end power, more than enough to throw some serious roost, then it ripped through the mid-range. Up top, the truck wound out fairly early, but more testing showed that the stock gearing was just about perfect for general driving, run-time, and motor temps. To boil it down- it feels like a brushed RTR on steroids, not some crazy 6S machine that can throw the tires off the wheels with one squirt.

Radio: This was our first time using the DHK radio and it worked fine for us. It has a neat look to it (KO Mars anyone?) and ergonomically it felt fine in our test driver’s hands. We did not walk off the range, but we never had it drop signal or glitch in any way during our testing.

Broken Parts: After it was all said and done, we thought the Crosse BL took a good amount of abuse before breaking. We tapped numerous curbs, landed upside down after hitting a ramp, etc, with no breakage. At the end of the day we ended up stripping the plastic spur gear, but not after a solid amount of hard driving.

Stock the Crosse BL comes with a long wheelie bar. Wheelie bars are a good idea for the most part, but the Crosse BL doesn’t really use its. The Crosse BL can pull wheelies, but only when it can get enough grip. That doesn’t happen a whole lot so we rarely had to worry about the truck wheelieing over backwards. Also, the wheelie bar is quite long. This tends to put it in the way when making rear-end-low landings off of jumps.

After checking the runtime on the truck, we recorded a motor temp of 140 degrees after running for 20 minutes. Ambient temp was around 55 degrees. Very nice.

You don’t see much chrome on trucks now days, we were pretty stoked to see some on the Crosse BL.

The Crosse BL will pull the inside front tire off the ground when cornering on high grip surfaces, which is pretty fun. Also, the tires sound like full sized units when sliding around on pavement (heck ya!). Once again, very fun.

Best Mod: If you do a lot of jumping or hard off-road driving, removing the wheelie bar will instantly help the truck handle better at zero cost. Next we would throw on a set of either Pro-Line Badlands (for loose terrain), or Trenchers (for grass, pavement, dirt).

Time To Bash: B We had no issues getting our test truck up and running. We were stoked to see a Deans plug on the ESC.

Workability: B The BSRC Bash Crew did very little wrenching on the Crosse BL, but when we did, the nice open layout and hex hardware made it easy to work on.

Car Show Rating: B Our Bash Crew were big fans of the big truck body and detailed chrome front bumper. The wheel/tire combo also looked on-point for the application.

Bash-A-Bility: B We just didn’t break much on the Crosse BL. We drove it fairly hard and it still took some serious abuse before it broke.

Fun Factor: B The first time drivers that we let loose on the truck obviously enjoyed how the truck would drift around corners instead of being too darty. Our test crew guys loved hucking it off wood ramps and racing around makeshift grass tracks with it.

Handling: C The Crosse BL isn’t tuned for winning IFMAR championships, it is set-up to make it easy for first time drivers to get the hang of things. So while it won’t win many races, its handling will win over new driver’s hearts.

Value: B Just $299 for a brushless 4wd monster truck? In some cases that would not be a good deal, but the Crosse BL holds up well and has decent power.

Parts Availability: C We didn’t find any DHK parts at our local hobby shops, but did find the parts easily available on-line.

BigSquid Rating: B- The Crosse BL just might be one of our favorite trucks for new drivers. It sports a power system that is about perfect to learn on, while still having more power on tap to unleash later with taller gearing. Also, its chassis and suspension are tuned to make it super easy to drive. Even though it is tuned for new drivers, our more experienced test drivers still had fun with the truck. It was a beast in grass and was really good at jumping. We are big fans of the Crosse BL and can certainly recommend it to you.