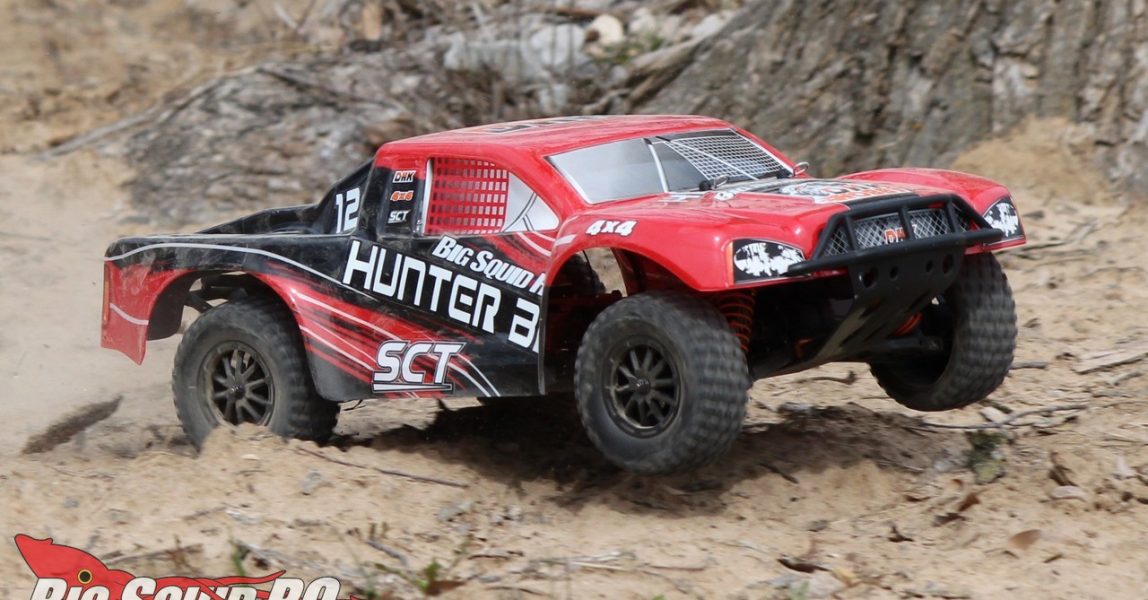 Across the globe the DHK Hobby Hunter BL short course truck is well known, but not so much here in America. A few months ago HRP Distributing started bringing DHK into the states so that the American bashing crowd could find out what’s up. We’ve been bashing/thrashing/driving the Hunter BL short course truck to see just how it stacks up. At a $289 price point, and featuring a 4wd chassis and brushless power system, the Hunter BL is bound to wind up in a lot of people’s rc garages. How fast is it? Is it easy to jump? How does it stack up to the other brands? Scroll down to find out those answers and more…

Primary Competition: The DHK goes up against some pretty awesome trucks. You’ve got trucks like the ARRMA Senton in its class, as well as the Traxxas Slash 4×4, the ECX Torment 4×4, etc.

What’s Needed To Complete: To get the Hunter up and running you’ll need four double-A batteries for the transmitter and a battery to power the truck. You’ll also need a battery charger.

Build Quality: Our test truck was well built with the exception of the servo saver, which was on the soft side, and the front toe. Up front, our truck had about 3 degrees of toe-in out of the box. In rc, we typically run zero, or up to 3 degrees of toe-out, on the front suspension.

Test Venues: We did all our testing at the St Louis Dirtburners off-road track, Valley Park Archery Park, and at Minnie Ha Ha Park, all of which are near Fenton, Missouri.

Set-up Notes: We did not change any settings on the truck before testing. We used four MaxAmps AAs in the transmitter along with a MaxAmps 2S 5250 LiPo to power the truck. Charging duties were handled by a Hitec X1 Pro.

Driving: How is the DHK set up? It is set-up to make it easy for first time drivers. It has some push going into most corners, which is good for first timers. On higher bite surfaces (pavement, hard packed dirt at the track, etc) the truck was nearly a neutral turner, but the Hunter BL had a light push going into most corners on looser surfaces. The Hunter BL was mostly well behaved in corners, but the rear could get loose after the apex when pounding the gas.

Jumping was rock solid with the DHK. It tended to take off the jump face in a controllable manner, and making small mid-air corrections was easily enough done. Upon landing, we found the suspension to be a bit lightly damped for serious airtime, but nonetheless it flew better than expected.

Ya, but what about driving it on grass and pavement? Both of those surfaces were well taken by the DHK. On pavement it had solid power and didn’t traction roll that much, while in grass it did a decent job for the tires that it comes with.

Overall we were impressed with the driving experience of the Hunter BL. It drove a lot like the other 4wd short course trucks in its class, which is a good thing.

Power: Before we started testing the brushless powered Hunter, we didn’t know what to expect. Did it come with an efficient, but geared for noobies, power system, or was it geared for 60 and crazy BL power? The Hunter BL comes with a brushless system that works well for new hobbyists. It tops out in the 20s, which is where you want to see it for new drivers. However, it is quicker than a normal brushed RTR as it completely hauls butt from a dead stop to its top speed.

As far as the raw power is concerned, it has an authoritative launch off the bottom, a brisk mid-range, and pulls hard up top until it runs out of gearing. Also of note, the temps on our test unit worked out fine. No, our ambient temps were not very warm (30-50 F), but the hottest we ever saw the motor get was 144 degrees. In warmer areas you will want to keep an eye on temps, but for late winter bashing the stock gearing was spot on for us.

Radio: The more we use the DHK D302T, the more we think it is our favorite RTR radio. No, it isn’t really fancier than most RTR radios, but it drives well and looks “sorta” like the old KO Mars.

Broken Parts: The Hunter BL held up really well to normal bashing. We could hit normal sized ramps, pound through the rough, and bounce off all sorts of stuff without breaking. Once we stepped up the torture, we were able to break it. One of our test drivers (Iron Mikeee!) caught a spike at the track WFO, which we thought would break the truck, but did not. However, a short time later one of our drivers drilled a pipe at the end of the track and broke the tie-rod in one of the upper a-arms. To boil it down, if you drive normally, the Hunter BL should be more than tough enough. If you like to get extreme, expect a few broken parts here and there.

While we aren’t fans of body clips, at least the DHK comes with some larger than normal units that make it easier to get the body on and off.

The truck comes with a light orange anodized top deck, we would rather have seen black, gun metal, or the old standard blue.

How about that stock servo? No, it isn’t fancy, but it is more than up to the task of backyard bashing.

Hey DHK, thanks for the CVD style driveshafts. Some trucks only come with bones, which can be a pain when you break and that bone goes flying out of your rig at 25 mph. CVD driveshafts have performance advantages, but for bashing we like them simply because we spend less time looking for parts.

Best Mod: Tires. The stock kicks are best on pavement and hard dirt, installing a set of tires like Pro-Line’s Badlands will give the truck a LOT more off-road capability.

Time To Bash: B We found the Hunter BL to be easy to get up and running.

Workability: B With hex hardware and plenty of elbow room to spin wrenches, the Hunter BL easy to work on.

Car Show Rating: B While the body is a bit on the plain side, all our test drivers liked the scale looks of its wheel/tire combo. The bumpers were also on-point for a short course truck.

Bash-A-Bility: B Our test unit handled normal driving quite easily, we had to seriously tag some hard objects to break it.

Fun Factor: B The DHK isn’t about winning championships, it is about fun and that is exactly what our test crew had while driving it.

Handling: B While not tuned for razor edge race performance, the Hunter BL is well set-up for new drivers. It has a bit of push entering corners and its brushless power system is geared for newer drivers.

Value: B At $289 for a brushless 4wd short course truck, we had lots of fun for very little cash.

Parts Availability: C We called three of our local hobby shops and did not find any parts locally. As DHK is fairly new to the American market that is to be expected. On-line we were easily able to find a myriad of parts.

BigSquid Rating: B The DHK Hunter BL was solid for us. It drove well, it had decent power, and it took some abuse to break. The DHK is a great starter truck, or a solid rig for the more experienced hobbyist to bashyard bash with.