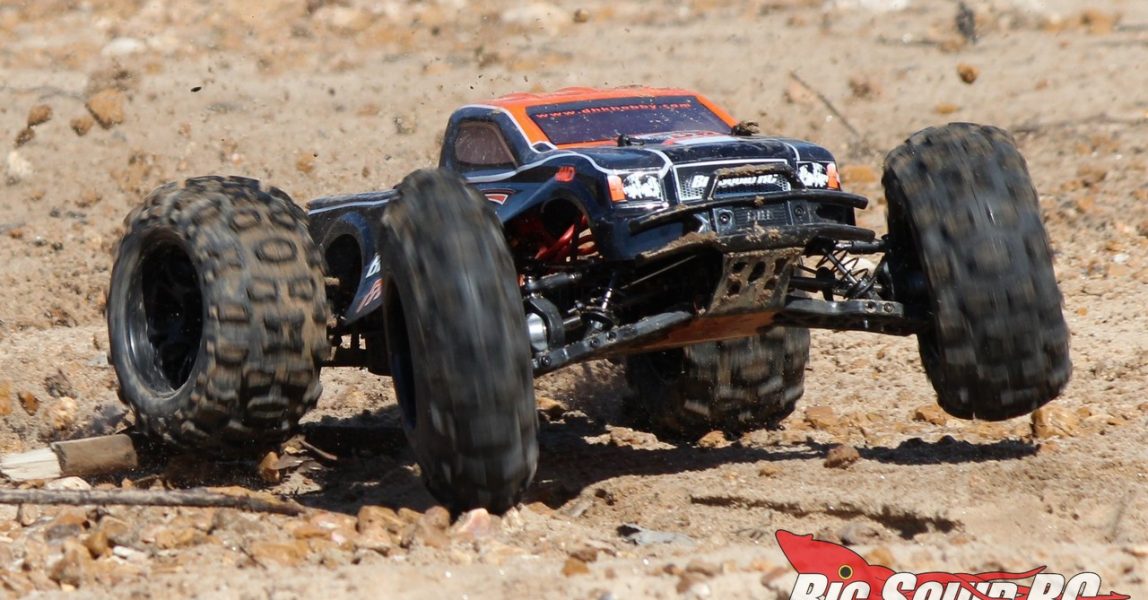 After reviewing a couple of other trucks from DHK, we finally got a shot at one of their 8th scalers. A few weeks ago we started testing the 1/8th RTR DHK Hobby Maximus Monster Truck to see how it stacks up to its competition. The Maximus sports quite the affordable price point, we wanted to see if the truck was well suited for back yard bashing. How fast is it? Does it break when you bash it hard? Is it easy to drive? Scroll down to see what we found out…

Primary Competition: There is all kinds of serious competition in the 1/8 monster truck category. Trucks like the ARRMA Kraton, Losi LST 3XL-E, Traxxas E-Revo 2, etc, make up some of the DHK’s competition.

Build Quality: We did find one issue with the Maximus. Out of the box the speedo had come loose during shipping. We pushed it back down and were good to go. Otherwise, the gear mesh was good, the shocks were working properly, etc.

Set-up Notes: We drove the Maximus bone stock making no changes to its suspension or other settings. To power the transmitter we used four AA MaxAmps batteries. The truck was powered by a pair of MaxAmps 2S 5250mAh LiPo packs. Charging duties were handled by a Hitec X1 Pro.

Driving: The Maximus comes in slightly smaller than most “8th scale” monster trucks, but it is larger than the typical 1/10th MT. It also is has a more narrow profile than a typical monster truck. With all that said, the Maximus was absolutely capable of hanging with the big boys in its class. While not as fast as some, it still had impressive power. On the downside of things was its cornering capability. Sure it cornered fine for a backyard bash machine, but compared to the better trucks in its class, it tended to traction roll more, and it was harder to drive. About the traction rolling, the chassis is a LCG design, it was the truck’s tires that would sporadically fold over and cause the truck to roll. This could happen at pretty much any time or any speed when cornering. Also, the Maximus had very touchy steering near neutral, although it tended to push all the way through a corner. The touchiness near neutral on the steering made it hard to make small course corrections while at speed.

In the suspension department, the Maximus was sprung and damped too lightly. This caused some excessive chassis roll in corners, and it also caused the truck to bottom out hard when landing from jumps. By the way, the Maximus jumps impressively when in the air. It has a nice blend of wheelbase to tire weight, and it has a center diff. These factors allow the Maximus to typically fly nice and flat. Its power system and 4wd also make for easy/forgiving trigger inputs while airborne. But those landings, ouch. Thankfully the truck was tough enough for repeated pavement slap landings, read more on that below.

Overall, new drivers will have an easy time learning with the Maximus, experienced drivers are given enough power and handling to have a great time.

Power: We ran 4S on the Maximus and it had good power. 4S is the maximum cell count on the ESC, and with stock gearing it had solid yank right off the bottom, some authority in the mid-range, and tore out to a 39 mph top end. No, it isn’t the fastest truck in its class, but it has true brushless power, and more than enough to keep long time hobbyists entertained. The Maximus feels a lot faster than a typical brushed/27 mph RTR, yet isn’t too insane to learn to drive with. Better still, it appeared the truck was conservatively geared. Based on our temp readings, it appears there is more power to be unleashed by simply bolting on a larger pinion.

Radio: As much as we like to hate on RTR radios, we think the DHK unit has become our favorite. No, it isn’t high-end, but it has some weight to it, and generally feels like a radio from 20 years ago. Oh and, it sorta reminds us (looks wise) of the old KO Mars, one of the best radios ever.

Broken Parts: With DHK being a somewhat unknown brand here in America, we still look at them very closely for durability. To boil it down, the Maximus was much tougher than we expected. We think if you drive it “normally”, meaning driving it like you actually paid for it and have to buy replace parts, that it will hold up a long time. We did a lot of normal bashing with it and the truck just didn’t break. By normal bashing we mean hitting ramps, doing backflips, making full speed passes over rough ground, etc. The Maximus did great in that environment, but we are BigSquidRC, so we turned up the torture a notch. We did a couple roof jumps that landed to grass on all four tires. This resulted in a stripped out servo horn, but the rest of the truck was still in excellent shape. This prompted a jump from the peak of a two story house. Seriously, that is no joke for any truck. We hucked the Maximus off and landed to thick grass on all four wheels. However, the truck landed on a rear corner and seriously bent an axle extension at the wheel. While not technically undrivable, our test truck needs a servo horn and a rear axle to get back to bashing, not bad for the amount of bashing it went through.

We didn’t notice much out of the box, but after a few packs we saw a lot of slop in the truck. We also noticed some loose bolts that were not associated with the slop, so check your truck after every couple runs.

The stock battery tray bars are weird, but worked fine for us.

The fan on the motor is really loud. However, it seemed to work really well, and it is still alive today after a bunch of slap landings.

The Maximus sports a couple degrees of toe-in at the front of the truck. Normally you don’t like seeing toe-in up front, but it looks like the DHK crew went with some toe-in to help soften the truck’s initial turn-in to corners.

Ya, the stock tires look gnarly, but don’t seem well suited to any surface. They don’t provide much traction, and are soft enough to fold over at odd times when corning (resulting in a traction roll).

Hey, we just love the name, we hope DHK keeps updating the Maximus in the future!

Now, about that runtime number we listed above. We are changing things up a bit. Instead of testing a truck for its maximum runtime, we are now going to run them for 5 minutes, then check the amount of battery used. Not the Maximus, but some trucks we test are geared too tall, making them overheat at the end of a full length run. Us going to measuring a 5 minute run, then posting the amount of battery used, gives you an idea of the potential runtime of the truck, without having to burn up motors. The Maximus used 1250mAh during a 5 minute run on a 4S 5250 pack. Therefore, you could calculate that 10 minutes would use around 2500mAh, 20 minutes would use around 5000, etc.

We didn’t really notice the stock servo. It did not have high-end performance, but it wasn’t so bad that we noticed it all the time.

Time To Bash: C We found the truck easy to get up and running, but it did require some wrenching to bolt on the wheels.

Workability: B Our test crew did very little wrenching on the Maximus, but when we did, we were greeted with an open layout and hex hardware.

Car Show Rating: B The Maximus screams “Bash Truck!” and hits the nail on the head. We really liked the orange/black paint scheme and the look of its wheels and tires.

Bash-A-Bility: B Our Bash Crew found the Maximus to be a solid truck. Light bashing did nothing to it, we had to get hardcore to break it.

Fun Factor: B What’s not to like about solid power and a truck that begs to be jumped higher/further?

Handling: C No, the Maximus isn’t the best handling truck in its class, but it is still loads of fun for backyard bashing.

Value: A We think the Maximus is a great value. While not quite as fast or agile as its top competition, the Maximus is still a solid truck and costs hundreds of dollars less.

Parts Availability: C After checking around at our local hobby shops we didn’t find any parts. On-line we had no problem locating all sorts of replacement parts.

BigSquid Rating: B- The DHK Hobby Maximus gives you loads of backyard bashing fun for an affordable price. Ours was durable and loved to jump, we can definitely recommend the Maximus to you.