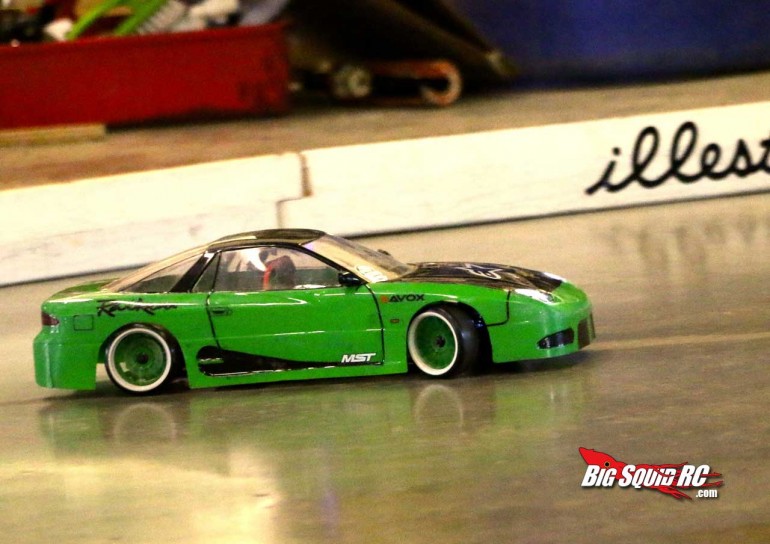 What’s up drift peeps, Evol here with another installment of the Drift Itch. This week’s itch is aimed at those RC folks on the sidelines who have the “itch” to try RC drift but maybe they feel like they don’t have the funds to throw at a fully blinged carbon and billet drift sled. Well I’m here to tell ya that you don’t need all of that. Yea that stuff looks cool and is fun to talk about but plenty of fun can be had with plastic fantastic; and I’m here to point you at 3 drift rigs that can put you on the path to being drift king without breaking the bank.

This list will be comprised solely of build it yourself kits. I’ll have a whooooole other list for the best budget ready to runs next week.

The first car I’m going to point out is the Yokomo Drift Package. Yokomo are pretty much the godfathers of RC Drift. They were putting out stuff in fully licensed versions of 1:1 drift cars in Japan before half of world had even heard of RC drift. The original Drift package or DP for short comes in about 1000 (not really) different build types and they range from around 100 dollars to 500 dollars for a roller. It comes in 50/50 configuration but is easily convertible to CS. This is also the chassis of choice for now famous RC drifter Drift44. That should put to bed any doubts of this chassis capability. It’s also the basis for many high end RWD conversions and the aftermarket for this car is well developed. That’s good news because you can pick up this car in its most basic form and have plenty of options for upgrading down the road as your skills develop. It’s rugged shaft drive and plastic construction makes it ideal for beginners who bang into stuff constantly.

Speaking of crashing that brings me to my next point – parts support. I know that part availability is a major concern in peoples mind when they purchase a new platform. The fact is that very few of these drift car parts will be available at your local hobby shop in the near future. Sites in the US that support them are are few and far between. Most likely the parts will have to be sourced online and will take a week or 2 to get here. That’s something that took me a while to get over when I first got into this. But now It seems like I have a constant flow of parts from China and Japan and I order with as much confidence from these overseas retailers as I would with Tower or any other domestic seller…..much to the chagrin of my local mail carrier who I think would like to strangle me.

Another popular low dollar platform is the 3Racing Sakura D3. Random fact: Sakura means Cherry Blossom. The “Cherry Blossom D3” in stock form comes in at around the 100 dollar mark for a roller and is a great starter car. Its box stock countersteer setup can be extreme for beginners but with a little bit of tweaking this car is easily tamed to be handled by the most inexperienced hands. It also has a huge aftermarket following and can be fully blinged into an elite looking drifter. Tunability options are almost limitless with its belt drive and when dialed in its performance is on par with any high end drift car and should be on anyone’s list looking to enter the drift segment on the cheap.

The last spot for budget drift missile goes to the MST MS01D S version. Now technically this car is an almost ready to run because the chassis comes 90% built but you still have to have the knowhow to finish it and install electronics to get it rolling. Of the 3 chassis listed here it is also the most expensive. The MS01D comes in at just over 200 dollars for the roller. So this car is over the 150 dollar “budget price cap” but I feel it warrants a place on this list because it is a superb product. It comes with a beginner friendly 1.54 countersteer and is the best car out of the box of the bunch in my opinion. Its design is much more modern than the other 2 entrants in this list and can be directly upgraded to “VIP” status with simple bolt-ons to make it one of the best drifters on the market. MSTs quality and performance have rightly so earned them a spot in the top tier of drift machines.

So there you have it! Those are my picks for the best budget options for getting into drifting. There are other contenders in this category of course but some of these other entry level machines are the ones that I see people get into and then move away from rather quickly. The folks who start out with the cars in the list above tend to stay with their initial purchase much longer. And to me even if it’s more expensive initially, it’s cheaper than having to buy it twice!

So that’s my 2 cents on the matter. If you disagree on what should have made the list feel free to post below and I’ll tell you why you’re wrong…..just kidding. I’d love to hear other drifters opinions on this because I’m sure I haven’t considered every point of view. In the end it’s about trying to help bring new people into the sport and the more insight they can into other peoples experiences the better.

That’s it for now drifters!

Not enough RC Drift for ya? Click Here for more RC Drifting news on BigSquidRC.