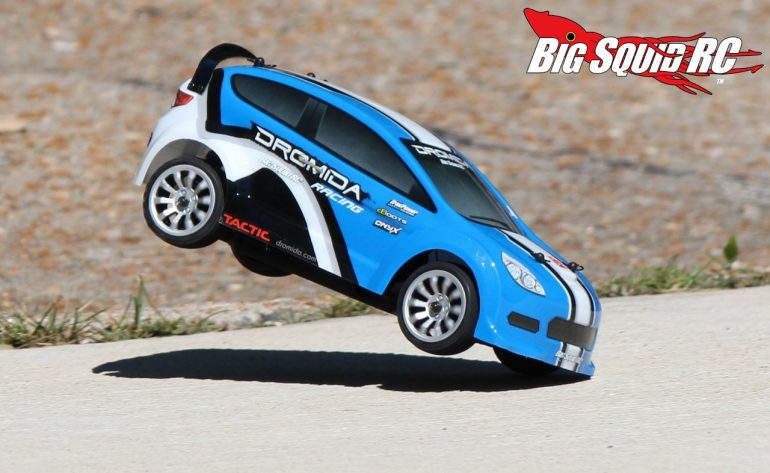 While Dromida is best known for their 1/18th scale off-road machines, a few months ago they announced a line-up of on-road cars. Over the last few weeks we have been thrashing the daylights out of the Dromida Brushless Rally Car to find out what it was made out of. Does the car have plenty of power? Can you drive it on more than just your driveway? How much punishment can it take before it breaks? Read on to find out…

Primary Competition: Some competition for the Dromida would include the Associated Apex 1/18th Touring Car and the Losi 1/14th Mini Rally.

What’s Needed To Complete: Absolutely nothing, everything you need comes in the box.

Build Quality: After giving the Dromida a close inspection, we come to the conclusion that it was assembled very well. The only problem we found was the double sided tape on the ESC was loose from the factory.

Test Drivers: For the test of the Dromida we had the normal crew of suspects that included Iron Mikee, Robbie G, T-Money, The RC Kid, and yours truly.

Test Venues: We got in a bunch of trigger time at several different venues. For crazy off-roading we used the 8th scale track at St Louis Dirtburners. For more normal bashing areas we visited Minnie Ha Ha park in Fenton Missouri and the city park in Belleville Illinois.

Set-up Notes: Lots and lots of bone stock, we didn’t change anything for our review. We did however skip the included wall charger and used a TrakPower VR-1 to handle charging of the stock NiMH.

Turning: Like many 18th scales, the Dromida had some oversteer. The front was ultra-planted just about everywhere, but not terribly so. Many 1/18th scaler have so much oversteer they are difficult to drive in a straight line, that was not the case with the Rally Car. Yes, it had loads of steering, even on-power, but it could still be driven easily in a straight line. And while the front was stuck like glue in corners, the rear was the opposite. The rear had very low side-bite and slid around a lot. Furthermore, on bumpy surfaces the light damping on the rear shocks left the rear of the buggy bouncing around too much, resulting in the rear wheels not even having a chance to grab hold when entering a bumpy corner.

Jumping: As you can tell by the pictures, our test car got a lot of airtime. No, the Rally isn’t the best jumping 18th scaler on the market, but it wasn’t bad either. The big front bumper would often times get in the way on steep jump faces and its light wheel/tire combo didn’t give it a lot of gyro effect when trying to make mid-air corrections. Truth be told, it jumped a whole lot better than we expected, but just didn’t have the suspension travel or heavy enough tires to jump as well as some of the other 18th scalers on the market.

Bumps/Whoops: While we found the front suspension to be slightly under damped, the rear acted like it had water for shock oil. Even on slightly rough pavement this caused the car to wildly bounce. At low speeds it gave the car a “scale” look while driving (which is all the rage), but at full scoot boogie it simply caused the car to crash. Luckily shock oil is cheap and it takes all of 5 minutes to install thicker fluid in the rear.

On-Road: Like mentioned above, at speed the Dromida can become a handful on rough pavement. When the pavement is super smooth, life is good and the Rally Car is quite quick.

Grass: We attempted to drive the Dromida in grass purely for testing purposes, but that didn’t work out too well. The Rally Car’s relatively low ground clearance and small tires simply could not get it moving. If grass is your only option to drive, look at the Dromida Monster Truck instead.

Tires: The stock tires had a neat look and were molded from fairly soft rubber. The tires worked best on pavement and on dusty hard packed dirt. They didn’t work well in grass or in loam, but as a whole did a good enough job.

Power: The big reason to buy this car is its brushless powerplant, so how did it do? Even on the stock batteery it provided impressive power. While it doesn’t top out at a crazy top speed, it goes from 0 mph to top speed in a big hurry and without hesitation. Low end power is strong, the mid-range rips hard, then it signs off at 26 mph. If you have only run brushed motors before and want a taste of what brushless feels like, the Dromida can certainly give it to you.

Radio: The radio is a standard Hobbico RTR unit that works reasonably well. We didn’t step off the range but it was longer than we ever tried to drive the car and its ergonomics worked well enough for a number of different hand sizes.

Broken Parts: Per the norm, our test car was treated very poorly. The first couple of packs we took it easy, after that it was pretty much game on. How did the Dromida hold up? Quite well. Yes, we broke a couple parts here and there, but it took some stupidness to break it to the point it wouldn’t drive anymore. Early in our review one of testers totally missed a ramp and slammed a curb WFO. This resulted in a steering rack hinge pin coming out. The pin was laying inside the chassis so we reinstalled it and were good to go. Afterwards, the same hinge pin would pop out of its mount occasionally, requiring a quick pop back in. Later in testing we did manage to break a front c-hub and to burn off a spur, otherwise it seemed to thrive on abuse.

The stock tires are fairly soft which is great for finding grip on hard surfaces. However, we ended up burning through the rears in 4 packs.

We noticed that even with the stock battery pack that there was no cogging from the brushless system. The power system on the Rally Car was very smooth from a dead stop.

We found that the Rally Car didn’t like our local 8th scale track. Because of its low ride height and big front bumper, it had a hard time getting around a rough/bombed-out outdoor track.

Speaking of that front bumper, it saved the car a bunch of times. Whenever one of our test drivers would get out of shape (which is quite often), that big front bumper would soak up all sorts of ugly. The bumper goes a long way towards keeping the car alive during hard bash sessions.

All of our testing took place during high temperatures. The coolest day that we drove the car was 80 degrees, with every other day being hotter than that. In those conditions we found that the ESC ran a bit warm, while the motor ran exceptionally well. On longer runs the motor would get over 155 degrees and we had the ESC go into thermal protection on two occasions.

The battery bar is made from a very soft plastic. It generally works well but on huge hits can allow the battery to escape out the side.

The stock battery pack is stated to be a 1300 and that is almost exactly what we measured. On a 1C discharge it came in at 1325mAh for us.

While the Rally Car doesn’t have a crazy top speed, it feels incredibly fast in smaller spaces. In areas the size of 50′ x 40′ the little Rally Car feels like a missile. This is a great thing for long time hobbyists, but can make the car quite a handful for first timers.

Best Mod: Very simple, drop some 40 weight Associated oil in the rear shocks. This helps the car handle better in every situation, and more importantly, allows you to drive the car much harder without having to worry about it bouncing itself into a crash.

Time To Bash: B There is nothing difficult in getting the Rally Car up and going. Everything needed to have a good time comes right in the box.

Workability: B The Dromida comes with a standard 18th scale layout which is generally quite easy to work on. For you older guys some of the 18th scale parts might be a bit hard to see, for everyone else it should be a breeze.

Car Show Rating: B Our test crew were big fans of the included wheels and tires. Both were on point and had a nice scale look to them. The body was loved by some, but not by others. Some liked it curves, while others were not a fan of the baby blue paint scheme.

Bash-A-Bility: B We found the Dromida to be a tough customer. It took a series of hard hits and came back for more. We had to get fairly rough with it before it would break.

Fun Factor: A All we have to say is “You gotta love brushless power!”. The brushless version of the Rally Car had solid power, an attribute that our seasoned drivers had a lot of fun with.

Handling: C While not a bad handling car, its under damped rear shocks hold back its ability to corner and to handle bumps.

Value: B You simply aren’t going to find many brushless RTRs at the same price point as the Rally Car, that’s why it earned a “B” in this category.

Parts Availability: C The Dromida series has been out for some time now and the Rally Car shares a lot of parts with previous models. Parts for the Rally Car can be found at some hobby shops and are very easy to find on-line.

BigSquid Rating: B We had a blast with the Dromida Brushless Rally Car and think you will too. It can take a hit, catch decent air, and give you a thrill with its brushless power system.