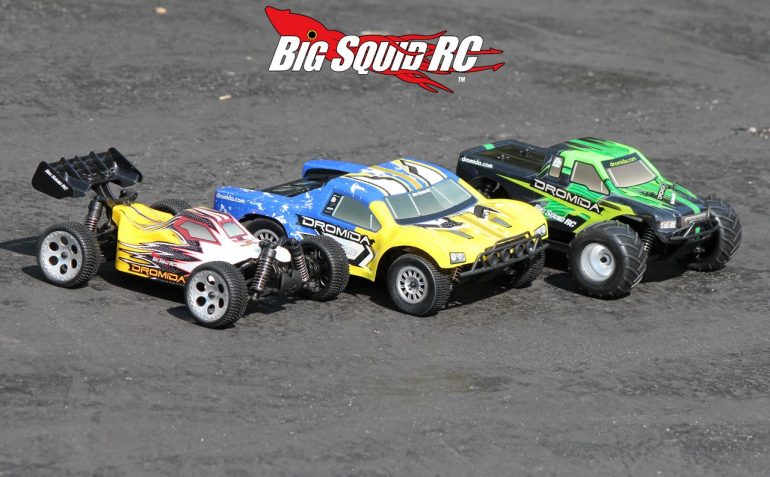 A few weeks ago the folks at Dromida announced a revised line-up of brushed 1/18th scale off-roaders. The Monster Truck received the biggest changes with all new wheels, tires, and more of a scale authentic looking body. Since then we’ve been driving all three of the new offerings- the Monster Truck, Buggy, and Short Course Truck to see if they are as good as we remember. We didn’t treat them well, instead opting to test them like a normal basher would- bouncing them off of curbs, hitting big jumps, etc. How does the new line-up of 18th scale off-roaders from Dromida stack up? Keep reading below to find out…

Primary Competition: Other brushed 1/18th scalers like those from Helion and Associated.

What’s Needed To Complete: Nothing, everything you need to get running comes right in the box.

Build Quality: We inspected all three vehicles to look for problems with their assembly and we found very few issues. Two of the shocks felt a bit under filled and one truck had gear mesh on the tight side, otherwise they looked well put together.

Test Venues: We busted out our testing in a Costco parking lot, 3 local parks, and at an 8th scale off-road track.

Set-up Notes: We like to test our vehicles bone stock and that was also the case with the Dromidas. We didn’t change anything and even used the supplied battery chargers on various occasions. However, for quick charging we did opt to use a Hitec X1 Pro.

Turning: Like many 18th scalers, the Dromidas have a lot of initial turn-in. Not so much as to make them undrivable, but they all reacted very quickly to the first steering input. At mid-corner they tended to settle in nicely, then exhibited a bit of push when on-power coming out of corners. Also of note, we found the Monster Truck to have the least amount of side-bite because of it chevron style tires and we found the Buggy to be the best at corning of the bunch.

Jumping: The three Dromidas jumped nicely, with all three behaving roughly the same in the air. The Monster Truck jumped just a tiny bit better thanks to it heavier/larger tires which allowed it to make mid-air corrections slightly easier and to absorb bigger landings more easily. The Short Course Truck jumped well but not as good as the others thanks to its large SCT style body. All three tended to jump level and didn’t get too rattled when hitting ruts on jump faces. All three are easy to jump and absorb normal landings quite well, although on huge landings, lets say over 3 foot high, their soft suspension tended to bottom out easily.

Bumps/Whoops: The three Dromidas were a bit soft on suspension and especially lightly damped in the rear. On moderate sized bumps all three could pound through fairly well, but when the going got really rough they tended to get some “yama-hop”, meaning their rear ends liked to swap around.

On-Road: We didn’t notice any issues running any of the vehicles on-road. While not fast, you could still have a lot of fun with them. They didn’t traction roll which allowed you to drive them WFO without having to worry about making a long walk of shame. Their suspension seemed well suited to soaking up cracks and small pot holes. Overall, we had some good times while racing the Dromidas around an empty parking lot.

Grass: The Short Course Truck and Buggy just didn’t have aggressive enough tires, or enough ground clearance, to really get around in grass. If most of your driving will be in grass, you’ll want something bigger. The Monster Truck did a somewhat better job. We were able to wheel the MT around in about 3″ tall grass thanks to it large chevron tires. No, it didn’t like somewhat tall grass, but if the grass is short in your backyard you can actually get around with the MT.

Tires: The tires on all three vehicles were fairly soft which allowed them to get decent grip on high bite surfaces. They also didn’t seem to wear that much, mostly because there wasn’t much power on tap. Any which way, the tires on the MT worked well in loam but provided very little side-bite on every surface. The tires on the SCT and Buggy worked well on everything except for deep loam.

Power: You’ll find a pretty standard 370 brushed motor inside the Dromidas and that isn’t a bad thing. The power system is about right for first time drivers, they had enough power to throw roost, as well as having enough yank to keep long time hobbyists interested. While there isn’t enough power to make the “big triple” at the local track, there is enough to power up steep hills, do donuts, and make moderately sized jumps.

Radio: A standard style Hobbico RTR radio is included with the Dromidas. While not big on features, it has great range and we never experienced any glitching during our test period. The unit is sized for medium to large sized hands, comes with a foam covering on the wheel, and has serrations on the trigger for better feel.

Broken Parts: We found our Dromidas to be quite tough. Their relatively low top speed helps save them from breaking a lot of parts, as does their tough plastic parts and general design. We slammed multiple curbs full speed and performed a half dozen roof jumps without the vehicles breaking. The first one to break was the buggy which split an A-arm around the inner hinge pin after slamming a curb full speed. We also managed to roast a spur gear in the MT, other than that, the vehicles held up better than expected.

The stock speedo allows you to go straight from reverse to forward. Yes, that is a lot of fun but can be hard on gears.

We found that the motors in our test vehicles got quite hot. After measuring run time in our SCT we used a temp gun to see hot the motor was, it was 240 degrees. No, you won’t want to be gearing the Dromidas up any time soon.

The stock manual was extremely brief and included very little information. Sure, it can get you up and running, and it can tell you about warranty information, but not much else.

Here is how we saw the three vehicles-

Short Course Truck- We found to be the toughest of the bunch. Its big bumpers and large body did a good job of soaking up ugly hits and helped keep the truck from breaking.

Buggy- This would be the best racer of the bunch. We felt it corned the best of the bunch and felt more nimble when raced around a track.

Best Mod: Associated 40 weight oil all around helps cornering and rough ground handling without breaking the bank or taking much time to switch out.

Time To Bash: B The Dromidas come with everything you need to drive, thus saving you time and money. You’ll need to charge up a battery pack for the car, otherwise they are ready to jam right out of the box.

Workability: B We found all three very easy to work on. They use a typical/open 1/18th scale layout which makes it easy to wrench on any part of the car. Their only downside is Phillips hardware and how small some of the parts can be for older farts to see with poor vision.

Car Show Rating: B While our favorite of the bunch was the newly remodeled Monster Truck, our test crew liked the looks of all three vehicles. The SCT has a nice scale short course truck look, while the Buggy has an aggressive race buggy look.

Bash-A-Bility: B Our test units endured some pretty serious abuse before they broke. You can hand the controller off to a first day noob and not worry much about it getting broken.

Fun Factor: B For the demographic they are intended for, the Dromidas are a lot of fun. Our noobie drivers had a blast with them.

Handling: B Overall, all three vehicles handle better than average in their class. While they do have some handling downsides (overly light suspension settings), they still got around better than most 1/18th sized vehicles.

Value: A All three Dromidas come with a $99 price point and we feel they are well worth it. They are a solid bang-for-the-buck.

Parts Availability: C We have seen several Local Hobby Shops that carry 1/18th Dromida parts, but most do not. With their platform having been out for several years now, parts are extremely easy to find on-line.

BigSquid Rating: B The new line-up isn’t drastically changed from previous models, but that is a good thing. The 18th scale Dromidas have always been a good choice for entry level or backyard drivers- the new Monster Truck, Short Course Truck, and Buggy are no exception. We found our test units to be very durable and a blast to drive. If you are looking for an affordable way to get into the hobby, or simply for a solid small scale basher, we can highly recommend the Dromidas to you.