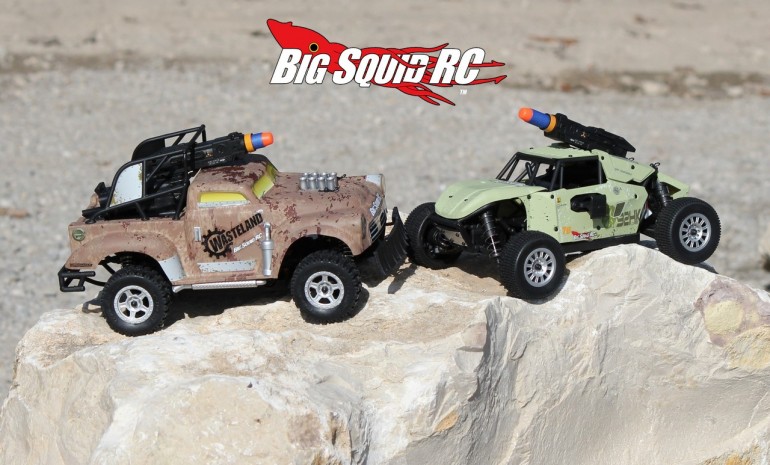 When we first saw the new Wasteland series vehicles from Dromida we couldn’t wait to get our hands on them. They had a cool “Mad Max” look, and more importantly, they had foam rocket launchers on top. During our review we’ve spent a lot of time driving, bashing, and shooting the Wasteland vehicles, here is the scoop on what we found out…

Primary Competition: There just aren’t any other hobby grade rc cars that come with foam dart launchers on top, thus they are basically in a class of their own. However, if you are just comparing to other 18th scaled vehicles they would be going up against units from Helion, Associated, and a number of other brands.

What’s Needed To Complete: Nothing, nada, not one single thing. The Wasteland vehicles come with everything you need to get started, including foam rockets.

Build Quality: We didn’t see any build quality issues after our initial inspection. Gear mesh was good, we didn’t find any loose or over-tightened screws, and the shocks felt well built.

Set-up Notes: We ran both vehicles as they came, not changing a single thing, but we did skip the included wall chargers in favor of a TrakPower VR-1.

Turning: Both vehicles turned much like previous Dromida 18th scalers, they have a lot of bite at initial turn-in, then turn fairly well afterwards. That initial oversteer can make them hard to drive in a straight line, but can be fairly easily tuned out by stiffening the front and softening up the rear suspension. Btw, those big ole’ rocket launchers add some weight up high, thus making both vehicles traction roll more often than previous Dromida 18th scalers.

Jumping: Both units did ok in the air. They don’t have a lot of over-rev to bring up an endo, but a tap of the brakes does bring the nose down when needed. They both tended to jump fairly level. The plow on the track would get in the way during nose landings, otherwise air time was fun time with the Dromidas.

Bumps/Whoops: The extra weight of the rocket launcher system does come back to hurt handling in the rough. The weight makes both vehicles blow through their suspension more quickly, and with the extra weight being placed so high, on occasion they tip over when rebounding from large bumps. Also of note, the solidly mounted plow on the front of the truck digs straight into larger rocks and dirt clods, bringing it to a quick halt.

On-Road: While a bit darty on steering, both Wasteland vehicles are quite easy and fun to drive on-road. They traction roll a bit more than previous Dromida trucks, but we did the bulk of our testing on pavement and had a blast.

Grass: Neither vehicle, and more so the truck, work very well in grass. Their small tires and low ride heights prevent either vehicle from getting around in most types of grass. The plow on the truck makes it even worse, so if you plan to do any sort of grass driving you’ll want the buggy.

Tires: We found the tires on the buggy to work best on pavement and hard packed dirt, while the tires on the truck liked soft and slightly loamy dirt. The tires on both vehicles experienced very little wear and generally worked fine at all of our test venues.

Power: Nope, there isn’t a lot of power on tap. Both vehicles run a typical brushed set-up, which in the case of the Dromidas, has a bit of yank off the bottom, a smooth mid-range, then sign off early up top. Yes, there is enough power to have fun and enough to throw some roost on loose dirt, but if you are a speed demon you’ll be investing in a BL system.

Radio: While the radios looked like standard Hobbico RTR units, they did include the small third channel button used to launch the rockets with. We found range to be excellent and never experienced a glitch with either radio.

Broken Parts: We didn’t break much on either vehicle. After various hard slams we managed to blow the servo in the truck, while it took some decent hucking to burn out the spur in the buggy. We handed the vehicles off to numerous people (who all seemed to like to slam off of hard objects) without breaking many parts.

Just what does it take to shoot a rocket? Not much, it is quite easy. First the vehicle has to be turned on, then you have to manually cock a spring with your hand. Load in a rocket, then hit the fire button on the transmitter. Super easy, super fun.

As mentioned above, the plow on truck works against it when driven off-road. However, it works like a champ when playing demo derby. 🙂

The rocket launcher on the buggy is angled somewhat higher than the one on the truck. This means a couple of things. The buggy typically shoots a little further and it enables the buggy to hit the truck while still out of the truck’s range.

Hands off kiddos, after a long run watch out for those motors, they like to run quite hot (140 F on a 55 F ambient day).

Best Mod: For handling, stiffen up the front springs and go softer in the rear. This can easily (and cheaply) be done via pre-load spacers. Otherwise, spend your cash on extra rockets and have a ball.

Time To Bash: B We had no problems getting either vehicle up and running. Charge up a pack, insert a foam rocket, then get ready for fun.

Workability: B Both vehicles use a standard 18th scale layout which we found very easy to work on.

Car Show Rating: A Our testers all thought that the Wasteland vehicles both brought really cool looks to the plate. They are supposed to look like cars out of a Mad Max style movie, and that is exactly the look they achieved. On top of that, the truck has a great deal of small detailing that really sets it off.

Bash-A-Bility: B After all was said and done, both vehicles were as durable as previous Dromida cars that we have reviewed. They can take a fair amount of bashing with very little breakage.

Fun Factor: A The rocket launchers really do add to the fun, we had a ball testing the Wasteland series vehicles.

Handling: C While the rocket launchers are great fun to use, they place a lot of weight up high, hurting both vehicle’s overall handling.

Value: B While the Wasteland vehicles cost around $40 more than “regular” Dromidas, the rocket launchers make them worth the extra cash.

Parts Availability: C Dromida has sold a whole lot of vehicles through their Great Planes dealers and certain shops do have a nice stock of replacement parts. However, most hobby shops still do not, at least parts are readily available through on-line sources.

BigSquid Rating: B We had an absolute blast driving the Dromida Wasteland series vehicles. Their rocket launchers add something new to the bashing game that we found to be really fun. We can highly recommend the vehicles to anyone looking to have a great time bashing around the backyard. But… don’t just buy one, buy two, they are a lot more fun when used with a friend.