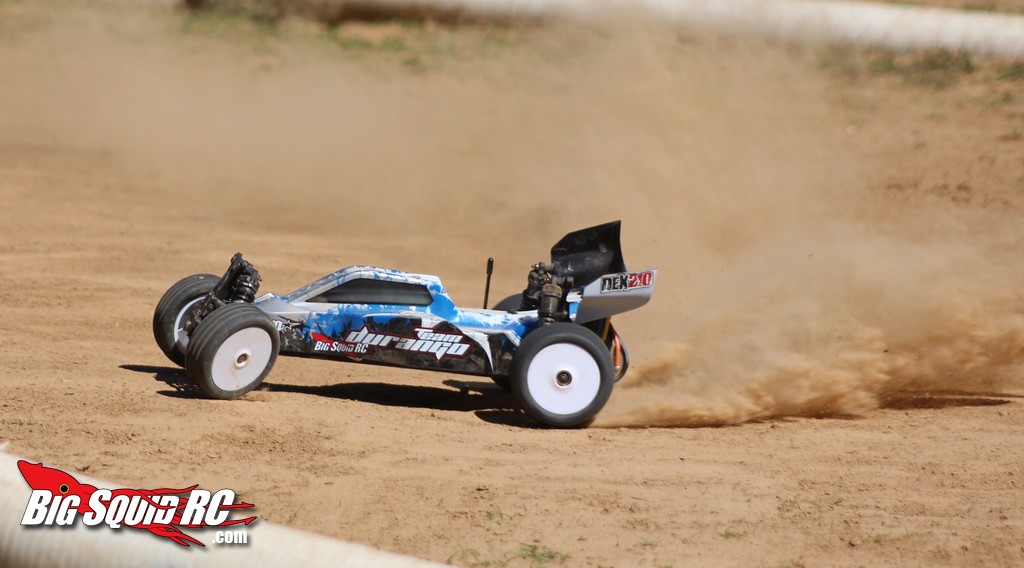 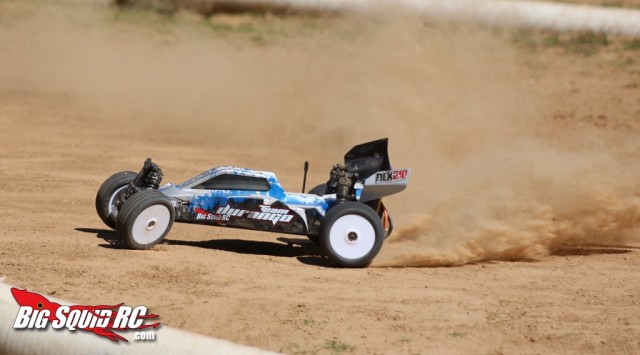 Since Durango was acquired by Hobbico it has really been blowing up. The Durango brand name was once an obscure brand used by elite racers in Europe, but now days you can find Durango’s anywhere and everywhere, including your local bash spot. There are plenty of basher that are looking to try something new, or they simply are willing to spend a few more bucks to buy the best of the best, and right now Durango has to be considered one of the highest end names out there.

Durango recently introduced many of their elite race platforms in RTR form. These RTR’s are said to be the first vehicles ever produced that are truly race ready. Today we’ll be finding out how the Durango DEX210 stacks up, both on the track and for bash use. Let’s take a closer look shall we?

What’s Needed To Complete: You’ll need 4 AA batteries for the transmitter, a 2S Lipo battery with Deans connector, and a battery charger.

Test Venues: RC Outlaws in Collinsville Illinois, Dirtburners in St Louis Missouri, an empty paved parking lot by one of the tracks and a grassy backyard.

Set-up Notes: Venom AA batteries were used in the transmitter and a Pro-Match 2S 5000 mah Lipo was used to power the buggy.

Turning: Because the Durango is billed as a race ready RTR we did most of our testing on racetracks. Both tracks we tested at were outdoor 8th scale types. Neither track was watered or blue grooved during our testing period so traction was very low. Both tracks had a hard base with dust and fluff on top and were slick to drive on regardless of vehicle. With that said, the Durango RTR buggy felt fairly neutral in the corners. It tended to have better on power steering than off power. In tight 180’s it planted going in then rotated well, and on high speed sweepers it turned quite well.

Bumps/Whoops: As I am writing this I am trying to recall my thoughts on how the Durango reacted in the rough stuff, but I must say that not much stood out in my memory. That is a good thing, as it means the Durango didn’t do anything bad in the rough. I don’t remember it ever getting all whacked out of shape even on blown out sections.

On-Road: I clearly remember driving the Durango on-road, the DEX210 pushes like a freight train on pavement. That shouldn’t really be a surprise, as pretty much any brand of 10th scale 2wd buggy has very little steering while on pavement. The upside is you never have to worry about it traction rolling, the downside is you’ll need to tap the brakes and crank the front wheels hard to get it to steer where you want.

Grass: Contrary to how it drove on-road the Durango buggy turned perfectly on short grass. But, just like any 10th scale buggy its low ground clearance hampers its ability to get around in grass. If grass is short the DEX210 drives incredibly well, if it’s even a bit too tall the buggy struggles to move at all. 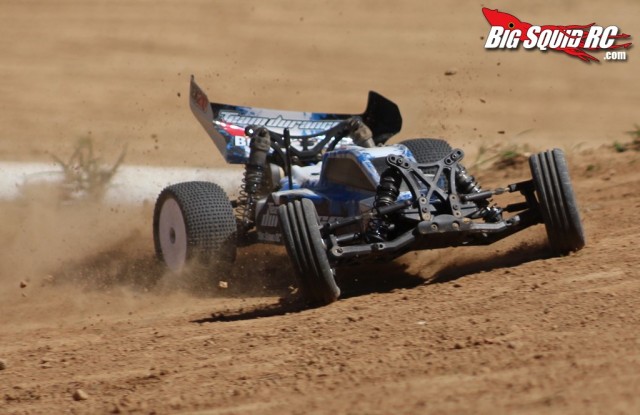 Tires: The stock tires were of a hard compound and had soft inserts. They lacked mechanical grip both on-road and off. You will need to put a proper set of Pro-Line tires on ASAP if you want some real grip regardless of surface.

Radio: Range was more than enough for any situation we were in and the ergo’s were quite pleasant. I can’t stand any of the Traxxas RTR radio’s, but I was quite comfortable using the Durango TX1. Overall a decent and usable RTR transmitter.

Broken Parts: We ran a lot of packs through the Durango and here is how the buggy held up. While not a “broken” part we had one rod end continually pop off. It was only one of the rod ends, and it would sometimes pop off when landing perfectly from a normal jump, and sometimes stay on when hucking off a roof, go figure. As far as broken parts go we didn’t break anything while on track, it was only after hucking the Durango buggy off a roof did we finally break a rear shock tower. To give some perspective here, an old school Losi XXX would have been a pile of rubble before we broke the first part on the Durango.

Misc Notes:
Sweet manual and packaging, best looking in the business.
Super small micro receiver, very trick.
Kick ass servo saver that works exactly like it should, once again another area the rest of the industry should take note of.
The Durango body pins suck, they are simply too small. Give me Losi or Traxxas pins any day.
The front body pin is a PITA to get in and out.
The double sided sticky tape that was used to hold down the speedo and capacitor is terrible, it simply doesn’t work. Plan on replacing it before you even drive the buggy.
The Durango sports proper Ackerman in the steering, this lends heavily to it’s ability to cut tight corners on dirt and grass.
There is no reverse. Just because you don’t use it when ‘racing’ does not mean it shouldn’t be a option to turn on or off. What year is this? 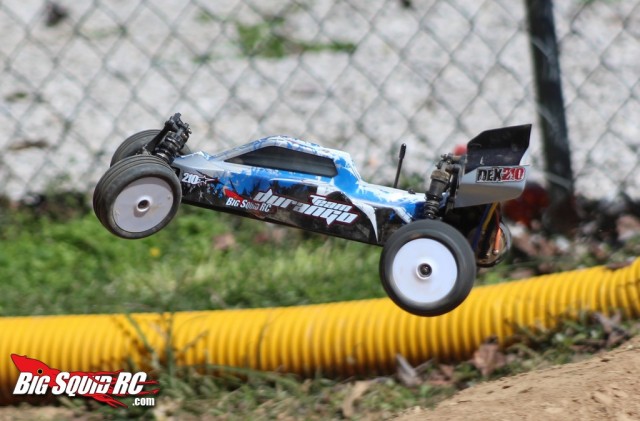 1. New double sided tape for the speedo and cap.
2. New rod ends, or better yet Dubro captured ends.
3. Deans is not a bad connector, but for higher current applications you’ll want to convert to Traxxas.

This is an easy one- tires. The hard compound of the stockers do not offer much mechanical grip, an appropriate set of Pro-Lines will yield sooo much more traction.

Car Show Rating – 8.0/10 – The Durango sports a “love it or hate it” type of new age body. I am not a fan of alien looking bodies, but other members of the staff loved it. What we could not argue was the high quality graphics, everyone agreed they looked stellar.

Bash-A-Bility – 8.0/10 – The Durango did not break on track and it took a half dozen hucks off a roof before the rear tower finally gave in.

Fun Factor – 7.0/10 – While the Durango buggy is a total blast to drive on track, we reviewed it from the standpoint of all around bashing. The attributes that make it so good on track hurt it on typical bash areas like pavement and grass.

Handling – 8.0/10 – On track the Durango handles great, on other surfaces not so much, but overall it is still a good handling machine.

Value- 7.0/10 – For bashing purposes there are better machines out there for the price.

Parts Availability- 8.0/10 – Parts for the Durango are easily found on-line and more and more local hobby shops are stocking them. No, they don’t have the presence on the pegs at your LHS like Traxxas does, but if you do break something you can certainly get a replacement in a reasonable amount of time

Big Squid Rating – 8.0/10 – Tentacles.. The Durango DEX210 RTR is perhaps the first vehicle that I’ve ever driven that could effectively be taken from box to race track with zero mods. That’s very impressive no doubt. However, it’s low ground clearance and small tires hurt it for bashing purposes. Thankfully Durango offers more basher friendly platforms like a short course and stadium truck, look for a review on both of those in the very near future. Till then, if your mind is set on a 10th scale buggy the Durango is a good quality unit that you will enjoy.