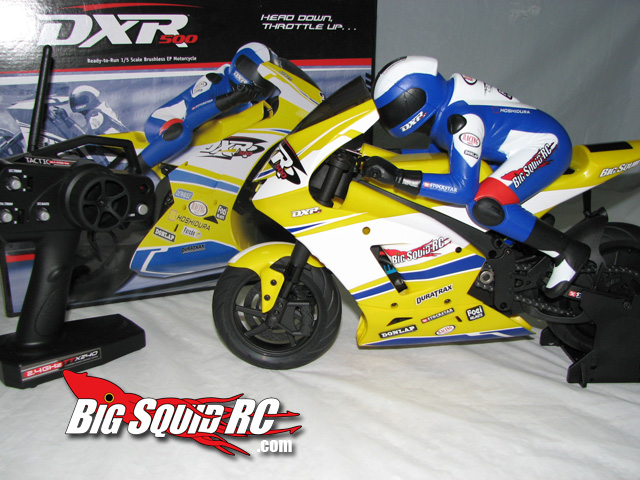 RC Motorcycles are rarely come across our desk, but when they do everyone’s heads turn to see what’s up. There is just something about driving a rc vehicle on two wheels that takes the experience to the next level, that is when you can drive it. Keep reading to see if we can handle the DXR or if it handles us…

What’s in the box:
The motorcycle comes assembled, with a Tactic 2.4Ghz radio system and stickers. You will need to supply the transmitter batteries and some sort of 7.2V NiMH or 7.4V LiPo.

Test locations:
Testing was mostly in the streets and parking lots. This cycle isn’t meant for the dirt and rough stuff.. it’s a street bike.

Looks:
The bike looks really good. It has a really nice scale look to it. The paint job is decent, but I’d like to see something a little more exciting. The rider looks good, and he’s ready for some serious street racing.

Power:
The 3800KV motor has a TON of power. We ran all of our tests using the TrakPower 5600mAh LiPo battery, and the motorcycle bolts! We had no problems lifting the front wheel off the ground, and if your really brave you can ride that wheelie down the block!

Driveability : One of the most important things about driving an RC motorcycle is it’s ability to actually stay on two wheels and drive it around. Technology with the rear wheel gyroscope has really been great for the motorcycle scene, and things have come a long way. The DXR 500 not only stays upright, but was surprisingly easy to drive. Seriously, we can not believe how easy it is to drive around a parking lot, or any other open space. One of the streets we test on has two one-way streets with a large cement divider in the middle making a large oval. It has very little traffic, so it’s a great place to test. The first run out of the box, we were a little worried because the turns are a little tight, and the road is narrow. Past experiences have taught us narrow and tight are not a good combination for motorcycles. Well, I got on the throttle and launched the bike. The first turn was a little shaky as I was trying to get an idea for the throttle, the tightness of the steering, but I was up and made it the the second straight! Followed by the third, the fourth, the fifth.. I couldn’t believe it, and either could Bill. How is it this easy? Around and around I went. Eventually I was getting crazy and trying to ride wheelies and crashed pretty hard into the curb. Something worth noting, the DXR does not stop quickly. To get the gearing and the gyroscope stuff going, stopping is more of a suggestion, like asking a cab driver to slow down
and pay attention. After the inspection from the cub smash, everything was still intact and ready to go. Wrench took the wheel, and again the bike drove around and around and around.
Now it’s not like driving a car, there is definitely a challenge to driving the bike, but it is by far the easiest we have driven. Maybe it’s the scale? It’s smaller than some of the other bikes out there. Maybe the weight distribution of the battery being so low? A combination of all these? No off-road though, you will need to keep this one on the street.

Durability:
Under normal driving with the occasional curb clip the bike has been good. We have put it down on it’s side a number of times, and had no issues. Of course, in true Big Squid RC fashion, we had to jump it! We lined it up on one of those small skate ramps and let it rip. Because it’s so easy to drive, we had no problems hitting the ramp (Other motorcycles, would of taken a few tries at least). The bike launched high, but ended up going nose down hard into the pavement. There isn’t a bumper or anything, so the front took the full force and cracked some of the hard plastic, and one of the support rods. The bike did drive away! But we will be ordering a few replacement parts.

Overall:
If you have been wanting a rc motorcycle, but have been putting it off because of their difficulty to drive, this is the bike for you. You will still need some room as they don’t turn tight, but if room isn’t a problem, driving won’t be either. Stopping is more of a suggestion, so you will need to watch ahead for obstacles. We like the Tactic 2.4gHz radio, we tested one back in our Radio Shootout, and glad to see one included with the bike. The speed and power are great, and if you think wheelies are fun in a truck, wait till your doing them on a street bike!

Time To Bash – 9.0/10 – Apply some stickers, insert a charged battery and your on your way.

Workability – 7.0/10 – Bikes are a little tricky to work on. There is a lot going on in a very small space. Keep the chain and gears clean.

Car Show Rating – 9.0/10 – This bike turns heads everywhere. I think a little cooler paint scheme would be a plus.

Fun Factor – 9.5/10 – It’s a fun challenge to drive. One of the easiest bikes we have driven and that makes it fun.

Handling – 8.5/10 – Steering is good, we had no problems getting where we wanted to go. Stopping/slowing down can be a bit tricky.

Power- 8.5/10 – The stock system is plenty powerful. You can ask for more more then wheelies!

Big Squid Rating – 8.0/10 – Tentacles.. -Easy to drive, with plenty of power. If you feel the need to go two wheels, this one should be on your list of bikes to consider!