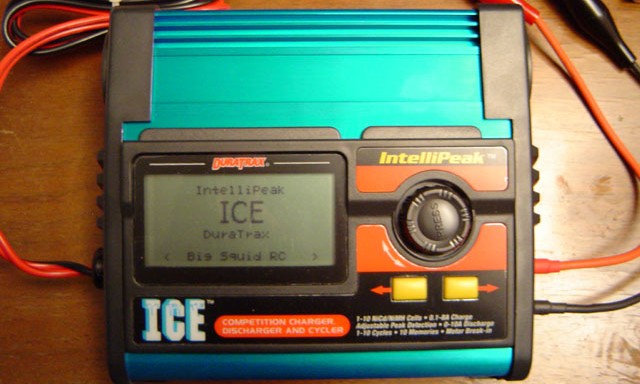 No chargers lost their lives in the creating of this review, but bashers need chargers. We have electric vehicles, we have receiver packs, and we need that stuff charged! Now, being bashers, we don’t always go out and buy the BEST of the BEST for ourselves. Do I really need that extra 100mAh that a $500+ charger is going to get me? Probably not. I just need something does not suck and preferably won’t cost me more than a new vehicle. 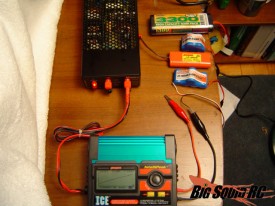 The IntelliPeak Ice charger from DuraTrax falls in the comfortable price range of $110-$130 dollars depending on your dealer. Keep in mind your going to need a power supply. They recommend something that can do 15 amps at 12 volts, although 12.5 amps is enough for most functions. I picked up a Hobbico 12v supply for about $89 and it does the job pretty well. While on the subject of power supplies, what’s the deal here? I mean really, we can’t come up with a standard connection? While at the local hobby shop I was shown 3 power supplies, going from $70-$150, and the Hobbico one was the only one I wasn’t going to have to modify to work with the banana plugs from the Ice charger. It would be nice if maybe DuraTrax also had a power supply they recommend, or even better, let me pay a extra $50-70 for a version of the Ice that has a built-in power supply if I don’t have one already. This is not really a big deal, but for people looking to buy a charger, I recommend talking to other people and seeing what they use for power supply’s before you head out to the hobby shop.

Ok, back to the charger. Let me say that out of all the chargers I have used, the IntelliPeak Ice has by far the nicest menu/options system I have used. It is clear and easy to use. Everything is adjustable. Settings include being able to change the amount of cycles, the peak sensitivity and even the top-off charge. There’s even an option to shut the sound off! (Finally, I can charge stuff late at night without people thinking there’s a smoke alarm going off somewhere!) There are 10-memory slots for various battery setups, each of which can be named. I can even add a personal boot name to the charger! 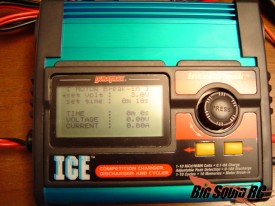 The charger does just about every type of battery you could possibly want to charge, and nearly every configuration. From 1-10 cells, NiCd, NiMH, and even Li-Ion/Li-Po. What is amazing is EVERYTHING is configurable! Have I mentioned that? I won’t list everything and bore you with the details, you can grab that from their official site. But here’s just a quick list: Charge Current (0.1A to 8.0 amps), Discharge Current, Peak Sensitivity (So you can give a little tolerance to batteries that may not be perfect), Discharge Cutoff Voltage, Trickle Charge Current, Cutoff Temperature (yes you can buy a optional temperature sensor, to guard your batteries from over heating), Number Of Cycles, Cycle Delay, Cycle Mode, Maximum Charge Capacity, Peak Delay, and Top-off Charge, just to name a few! Wow! And these are just the Charging options. I have really never seen so many changeable options on a charger, especially one in this price range. 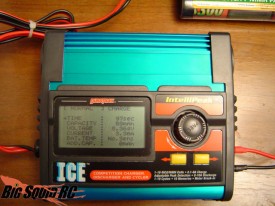 Another feature I have not mentioned yet is the graphing ability. (Which, amazingly enough is also adjustable!) It’s pretty cool to switch over from the data screen to the graph and see about where your batteries start to flatten out in their charge state, where their peaks are, and how they were doing before they were done.

One last feature I did not get a chance to use yet was the motor break-in mode. Can you believe it does all this, AND will break in your electric motor? As soon as I get a chance, I’ll fire one up, and add it to the end of the review. I’ll make sure to let everyone know on the news page when I do this. 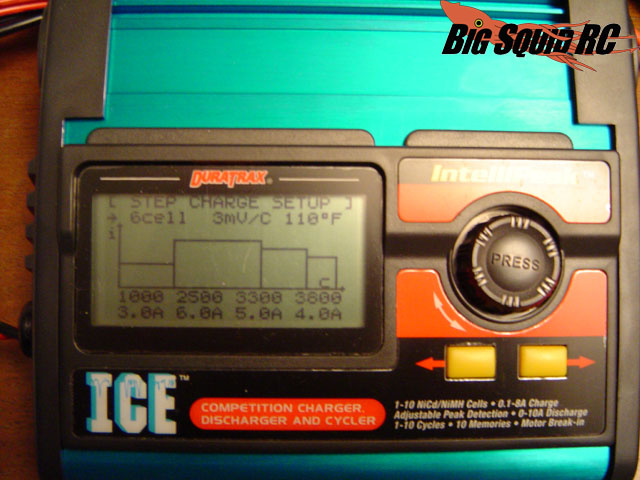 Ok, enough of the feature list, let’s talk about how it performs. We’ll I charged every pack I had available to me (everything from old 2400 Ni-Cd packs and 3300 NiMH packs, to 1100 mAh receiver packs and the new 600mAh Mini-Quake pack). I was surprised how well it charged even the old packs. We had a pack that was pretty disgruntled and didn’t want to charge on anything. The IntelliPeak Ice put it in its place and charged it no problem. I cycled some packs, and even tried out the Top-off charge options. Everything was easy to use and understand. Although I have to admit, I did overheat a receiver pack a little with the Top-off charge. I couldn’t remember if I had charged it or not (I had about 10 packs here) and I told it to go ahead and try to top it off 3 times (Which by the way is totally adjustable). It definitely got a little hotter than it probably should of before it cut off. The temperature gage would of saved me though, so I highly recommend picking one up. I believe they are about $9 and totally worth the money when your talking about saving a $60+ set of batteries. 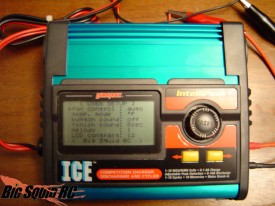 I have to say, that at first I was a little afraid of the dial. This charger has a lot of settings, and also a lot of buttons. You press the dial down to make a selection, and use the two lower buttons to jump around the menus. The dial adjusts the options, and moves through the menus. After just a few minutes, I was blazing my way threw the menus, and was pretty comfortable making selections. I was even able to stop referring to the manual. Speaking of manuals, it’s good. It’s a whopping 39 pages, but don’t let its size scare you. Unlike a lot of ‘high end’ chargers, that assume if you bought it, you must know what you’re doing. The IntelliPeak Ice actually takes the time to explain their features. It tells you good things to know and good settings to try and adjust if you are not getting the results you need. At first it seemed my cut-off was a bit early, but with a few adjustments the batteries were all charging to points I would expect them to.

So, can you tell I liked the charger? I hope so, because I was really impressed with it. It does have some room for improvement. Most of the problems I have with it are things that are just my personal preference, but things that I feel should be shared when doing a review. I’d like to see a backlit screen. I was in a pretty controlled environment, and I was able to get the lighting where I wanted it. However, there’s always the possibility when your at a big race, your stuck in some corner somewhere, and your pit light it dead or broke, you may have some trouble reading the screen. I noticed when I shut off the ‘menu click’ sound, (it normally beeps every time you touch the dial, or make a selection, which got a little old) that it also shut off my ‘all done’ sound. Just because I don’t want to hear it beep in the menus, does not mean I don’t want it to let me know when it’s done, or when there’s a problem and I should take a look at it. Did I mention the ‘all done tune’ is totally adjustable? Nice. Lastly, I’d like to see an option with an internal power supply. The charger is pretty small, and a little more bulk would be much preferred, then having to add a giant separate (another thing to remember) power supply that is almost twice as big as the charger itself. I have had chargers just a little bigger with a built in supply, no reason why that couldn’t be offered as an option for a few more $$.

Well, there’s not much more I can say about the charger. I’ll make sure to let everyone know when I get to toss a new motor on it for the break-in test. 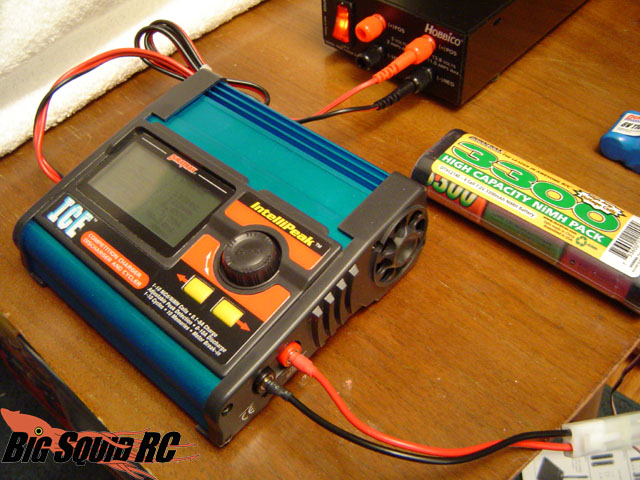