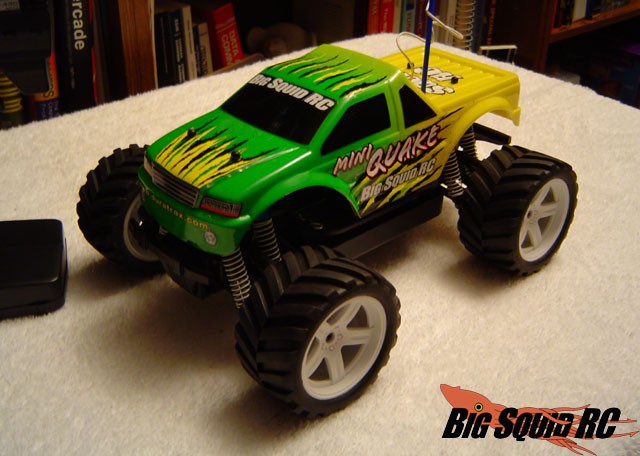 Before we get into it, let me start by saying, in the beginning we had some issues, but please keep reading the full review. Things definitely get better. 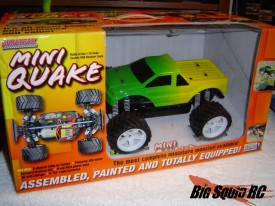 Our review process with the Mini-Quake got off to a shaky start. The first day out of the box, I got the battery charged, and was ready to go. I was trying to drive it around, and noticed it was going faster in reverse then forward. I thought, hmm.. maybe the ESC just needs to be reset. So I pulled out the directions and reset the speed control. Put it down for a test, and it seemed worse. I went to pick it up and the thing was blazing hot! It turns out there was two problems. The first being, that it looked like I got a bad ESC. Hey when your shipping so many, once in a while there’s a bad one. So it’s not big deal, just a bummer to wait for a replacement. The second problem was that the instructions on how to reset the speed control were incorrect. So if you have a Mini-Quake, or are thinking about buying one, download the new instruction manual (PDF), it will save you some headaches.

So after getting a new speed control back from Duratrax I charged the batteries again, and was ready to go. (BTW Duratrax has a very good customer service department. The people I talked to on the phone were always friendly, and they did a good job of keeping me informed about my part/problem.) Back to the garage! The first thing I noticed was it was VERY glitchy! It was taking off in reverse, going forward, turning, all sorts of craziness as if someone else was on my channel. I took off the body, and noticed that it was very neat under the hood. The antenna tube they give you is about 4 inches shorter then a normal tube, yet you have a normal size antenna wire. So my first mod was to put the antenna in a real tube. I put it down, and it was a little better, but still glitchy. So I put it back on the work bench, and started just moving the wires around. Every touch caused some glitches to happen. To try and keep things nice and neat, Duratrax zip-ties all the wires together. The receiver, the motor, the power, everything. So my next mod was snip the zip, and separate the wires as much as possible. I put it down, much better! I was now able to get some laps around the garage. 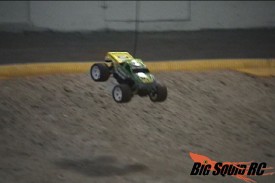 My first impressions after the mods were ‘Wow.. this thing is pretty fast’. We clocked it at about 17mph which was a really good speed. It took turns well, and has a nice center of gravity to it. It never felt like it was going to tip over, or get out of control.

So enough garage fun, lets bash! We loaded up the truck, and headed out to our local dirt track. I was a little scared at first. It was open practice, and later that evening was Monster Truck race night, so here we are, with a 1/18th scale truck, about to race right along side 1/10 scale monster trucks, 1/8th scale buggies, and everything in-between. My first lap I took with caution. I wasn’t sure how it was going to take the jumps, and I was also trying to pull over to the side, and stay out of the way of any Revo’s and LST’s looking to use me as a speed bump.

I made it around 1 full lap, and it seemed to handle pretty well, so it was time to actually drive it like I was going to race. Our mouths dropped when we saw it take the first jump. The truck had great traction, and a lot of torque to muscle it up and over. It was a little nose heavy, but keeping on the throttle let me land it with no problem. I flew through the first turn, and noticed a 1/10th scale electric truck on my tail. I decided I wasn’t going to pull over, and just see what I could do. I took the two sets of doubles perfectly, and was able to corner very tight and quickly to the back straight. I punched it, and the truck really took off. The 1/10th scale caught up quickly on the straight and was right next to me. He started to slow down early to make the turn, and I actually was able to regain the lead since the Mini-Quake cornered so well. I hardly had to slow down. I managed to stay in front of him for almost the full lap and was pretty happy! Then out of nowhere I was hit from behind by a Gas Monster Truck. It was pretty funny, because I was mid-air over a jump when he hit me. It literally launched my truck ahead like a rocket, but I landed it. WOW! I was having a great time, laughing and really enjoying the drive. I would occasionally hear ‘What the heck? What is that?’ from people on the drivers stand, when their 1/8th scale buggies were trying to pass me. I’m not sure they were as amused as I was, and I know for a fact there were a few people trying their hardest to use me as a speed bump again. 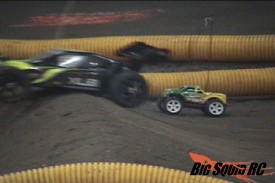 After a few laps I heard this roar. Someone had a new 1/7th scale XLB buggy! It took up the WHOLE track. A few people got their cars off to make room, but hey.. I paid my money, it’s open practice, I’m staying. There defiantly was not room for the both of us. The 1/7th scale had trouble making any turns, and was just huge. I think it was probably the second lap out there, when it ran me over. To my amazement the Mini-Quake was alive! Not only alive, but in once piece! I highly recommend you do NOT try that at home, I’m pretty sure it was mostly luck that it survived.

Eventually the battery started to go, and I was getting to the point where I wasn’t getting air over the hills, but just climbing up and rolling down the other side. It was here that I was hit again by another monster truck! I pulled into the pits, and was truly impressed. Not only did the Mini-Quake take a beating from me jumping, crashing, and doing a good imitation of gum on the bottom of the 1/7th scale buggy, but it was able to handle a full size track with no problems.

A few days later, we had it out in the parking lot, and was jumping one of those black ‘bike/skateboard’ ramps, and the Mini-Quake did great. It was landing well, the oil filled shocks could really absorb the landings, and it had a good top speed. We did a good job of bashing this little guy, and it really shined with flying colors. Sadly, the glitch problems arose again. I am starting to wonder if when the ESC fried, it took some of the receiver with it. I replaced the stock receiver with an extra AM I had in my pit box, and the glitch’s are gone! So I have sent the receiver back to Durtrax, to have them take a look at it.

A few things of note. The run time is a little short. The stock battery is only 600mah. An upgrade to a quality 1100mah pack I think will be a nice improvement. The battery they supply just fits, so it might not be so easy to squeeze in some aftermarket packs. The speed control only has forward with instant reverse. In this modern day and age, I would like to be able to expect ESC’s to come with Forward, Brake, Reverse, and Reverse lockout for racing. Even the Kyosho Overland had a brake, and the double tap for reverse. There have been many times on the track and in the parking lot where I just want to slow down fast, not lock up the tires, and slam into reverse. This has to be rough on the gears as well. Checking the Duratrax web site, they have all these features on many of their other ESC’s just not on this one. Lastly, don’t forget the Duratrax Stress-tech guarantee! They will replace a lot of the parts you might break in the first 12 months for free! I think there’s a few things they don’t cover, but not many other companies will do that! So hurray for Duratrax! They rock! 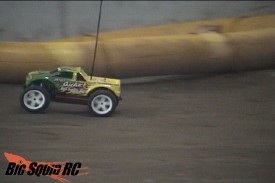 In the future, we will be doing some side by side comparisons with the Mini-Quake and many of the other 1/18th scale trucks. So a few quick comments from our early tests. Compared to the Team Associated 18T, it’s a bit heavier, and larger, so it’s acceleration is a little slower, and it does not jump quite as far. Compared to the Minizilla, it really does not look like a monster truck. The Minizilla really looks and handles more like a monster truck. The Mini-Quake seems to fall more into the ‘truck’ category, but that’s fine with me.

Overall, we were extremely impressed with the way it handled the full size track! It’s been amazingly durable, and pretty fun to drive and jump. It has a few little problems like the glitchyness, but with a few simple modifications, it can be corrected. I’m happy to start to see some cool after market parts coming out for it. I saw some pretty cool carbon fiber parts on a friends recently, and he had some other mods for wheels as well. Our next mod is going to be brushless! The truck has a lot of power, and is really good with the stock motor, but we are curious to see if it can handle the big speeds. It seems like the truck is geared for high end, but still decent on the low end, so we’ll see how that plays into the power. If you’re looking to get into 1/18th scale, or if all your friends are getting Mini-Quakes, and you are not sure if you want to join them, just know you’ll need to do a few things first. Make sure to separate those wires, download the new instruction manual, maybe change out the receiver, and you’ll have loads of fun! All electronic issues aside, it’s a solid truck. It would be cool of they released a pro kit, then you could just supply your own electronics. If you’re into racing or RC, you probably have a spare receiver laying around anyway. 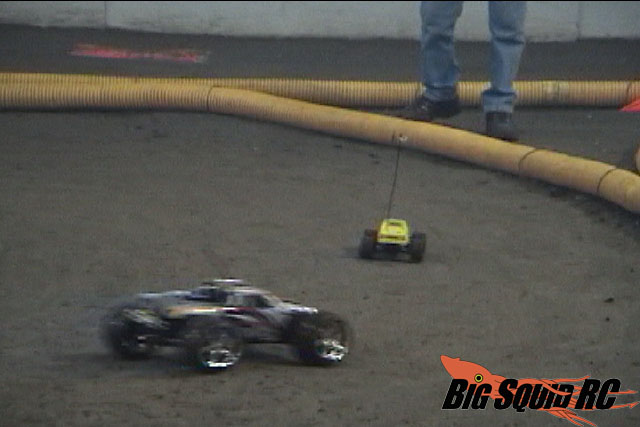