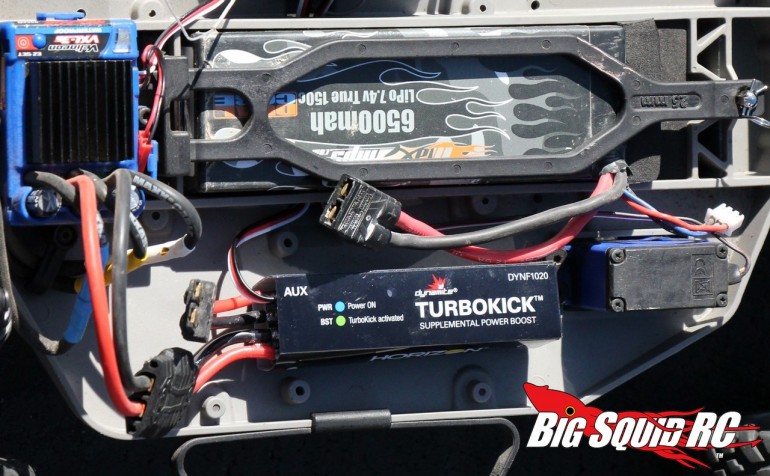 So here we are to review the Dynamite RC TurboKick. Just what the heck is a TurboKick? Well, it is kinda like a turbo button. You attach it to the third channel output of your transmitter and between the battery and the ESC. When you hit the third channel on your transmitter, the TurboKicks increases the voltage going into your ESC. In theory the TurboKick is like having an on demand 3S pack when you actually are only using a 2S.

Set-up Notes- We used the TurboKick in a number of different vehicles. For example, it went into our Castle powered Pro-Line PRO-MT that used a Hitec servo and Futaba 4PX transmitter. We also used it in a 2wd Traxxas Slash VXL that kept the stock power system and servo, but used a Spektrum DX4S transmitter. Various connectors were used from Castle, Traxxas, and Deans. Only MaxAmps and Kinexsis 2S LiPo batteries were used during testing.

Test Bench Measurements- On the test bench (and the TurboKick was not enabled) we measured the voltage on our test truck dipping down to 7.48 volts under load ( 2S LiPo battery), a pretty typical measurement. With the TurboKick engaged (and the truck still under a load), voltage was much higher, at 9.3 volts. That is a gain of just under 2 full volts.

Does It Work? Yes indeed, and it isn’t just a tiny boost in power, it is easily noticeable. Lets say you are cruising around the cul-de-sac. You have a 2S pack installed and are just doing speed runs back and forth. All of our test trucks had good rip on 2S, but the moment we hit the third channel on the transmitter (thus activating the TurboKick) our trucks felt almost like they had a genuine 3S pack on board. The TurboKick essentially gave our trucks 3S type power, when only using a 2S pack. This came in extremely handy when drag racing other members of the BSRC Bash Crew and also worked quite well for an extra boost of power when hitting big double/triple jumps. Driving with a TurboKick in a truck was sort of like a video game, just hit the Turbo button, then start really hauling ass.

The TurboKick only works for 5 seconds before it needs to recharge. Yes, 5 seconds is typically longer than needed to blast past your buddy or make that big jump, but still, at times it can limit the fun.

If you are using a 2S pack, your ESC will need to be 3S capable to run the TurboKick. After all, the TurboKick will be feeding 3S type voltage into your ESC, so that makes sense.

The TurboKick works on 3S packs too! We didn’t test our unit on 3S, but its specifications say that it is indeed capable. If you do use yours on 3S remember, your ESC will need to be capable of handling 4S voltage because it will essentially be ramping up the output of your 3S to 4S levels.

The 20 second re-charge time (while still very fast), can seem to take much longer in the heat of parking lot bashing.

No, the TurboKick isn’t the same as running a 3S pack in your 2S equipped truck. A true 3S pack has slightly more voltage and is always ready to go, where as the TurboKick can only be used in 5 second bursts before needing 20 seconds to charge back up again.

It took a while to get used to hitting a button on the transmitter to get the extra power kick’n. However, after a few runs it became automatic and was a true blast (of power and fun).

We put in a bunch of laps on a real rc track with TurboKick equipped vehicles and had a great time. Punching the third channel when hitting the main straight, or right before the big triple, was great fun.

It was also awesome to engage the TurboKick when doing backflips off of ramps. On trucks that were hard to backflip (like the Slash), the extra voltage/power typically gave just enough yank to get the truck spun all the way around.

We think the TurboKick is a real game changer and something that a whole lot of average bashers can use. If you are looking for more power, but don’t want to buy more batteries, give the TurboKick a try, we think you’ll really like it.

Read more reviews at This Link on BigSquidRC.