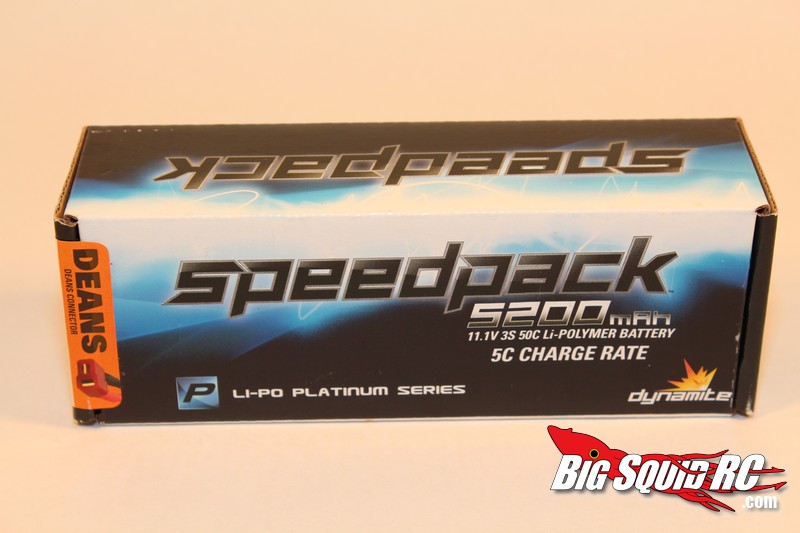 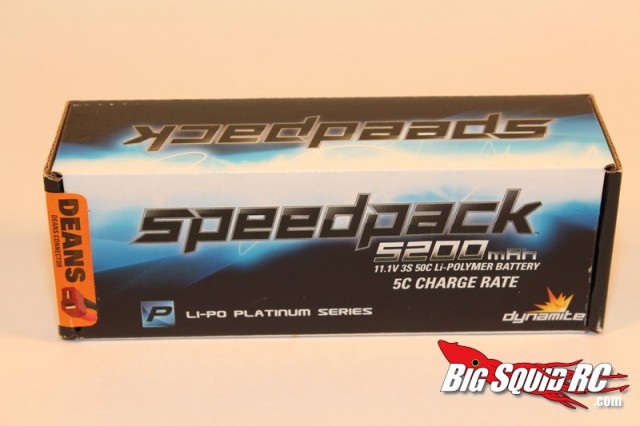 Intro: The Dynamite SpeedPack Lipo’s have developed a good reputation among the bashing crowd of being reliable, go to cells that put out good power. Today we’ll be taking a look at their hard case 3S 50C 5200 mAh Lipo. Does it put out insane power? Can it take a beating? Let’s find out…

What’s In The Box: Our review Lipo battery came ready to jam with a Deans plug pre-soldered.

Driving Impressions: Whoa! As I like to tell new people to the hobby, going from 2S to 3S may only be a third more voltage, but it feels TWICE as fast, and that was certainly the case when using the Dynamite SpeedPack. The SpeedPack we tested never failed to provide us with wayyyy more power than our driving skills could remotely handle. Instantly jabbing the throttle on the SpeedPack 3S 5200 turned our tires to giant pizza cutters with massive rooster tails behind them. Our Pro-Line tuned Slash is normally a great handling machine at normal power levels, but on the 3S SpeedPack it was at the very limits of what it could put down to terra firma. Our review 4wd Axial EXO is pretty fast on 2S, but after popping in the 3S Dynamite it was like an angry pitbull on crack- insanely, gnarly, just plain stupid fast.

Downsides: Solid pack, not much to gripe about. I know the Dynamite SpeedPack isn’t supposed to be a “high-end” line for Horizon, but a more attractive case and graphics would be nice. The pack has good performance inside, but it looks dull and average on the outside.

About The Graphs: We used a West Mountain CBA discharger to performed a 1C/5.2 amp discharge to test capacity. Next we did a 6C/31.2 amp discharge, and finally a 40 amp continuous discharge to see how well the Dynamite held its voltage under a continuous load. The higher a battery can hold its voltage, the faster your car/truck will be. Ambient temp for all bench tests was 70 F, the pack was always charged on a Hyperion 720iNet3 at 1C/5.2 amps and voltage cut-off was always set at 3.0 volts per cell during discharges. We tested it with a Traxxas connector just like we have done for every other pack.

The Dynamite states 5200 mAh on its packaging, we only measured 5007 mAh, which is 96% of stated capacity. Not bad, but not great.

Under load the SpeedPack held up well, putting out solid numbers at reasonable temps. Because this was the first 3S pack of this size that we’ve reviewed, we can’t state that it had epic or poor performance compared to other 3S packs. However, we can look at the output graphs and see at the 1 minute mark of the 6C test the SpeedPack put out 11.44 volts, which is 3.81 volts per cell. We recently reviewed a Pro-Match 2S pack, their 50C 5000 mAh, at its 1 minute mark under 6C its voltage was 7.65 volts, 3.83 volts per cell. By that comparison the Dynamite puts out .02 volts less per cell than the Pro-Match did under a 6C load. Not an optimal comparison by any means, but it roughly shows that the SpeedPack is in the ballpark for performance during bench testing.

Time to Bash – 9.5/10 – The SpeedPack had a Deans pre-solded, plus you can charge it at up to a 5C charge rate, these two factors get you on track extra fast.

Bash-A-Bility – 10/10 – The Dynamite lived through arguably the toughest beatings we’ve ever put a pack through with no ill effects.

Power – 9/10 – We are scoring the Dynamite as a 9 because it puts out plenty of solid power. But here is the real scoop- if you are used to only driving on 2S the Dynamite will feel about a 20 on a scale of 10.

Value – 7.5/10 – The Dyanmite is a mid-priced 3S Lipo that has solid power for the bank invested.

BigSquid Rating – 8.8/10 – Tentacles. If you are wanting to take your fast 2S truck to a completely new level the 3S Dyanmite pack can and will do it. It can power your truck to insane levels, gives you good run-times and endures abuse as well as any we have tested.

Posted by Cubby in Accessory Reviews, Dynamite on Monday, December 3rd, 2012 at 9:31 am