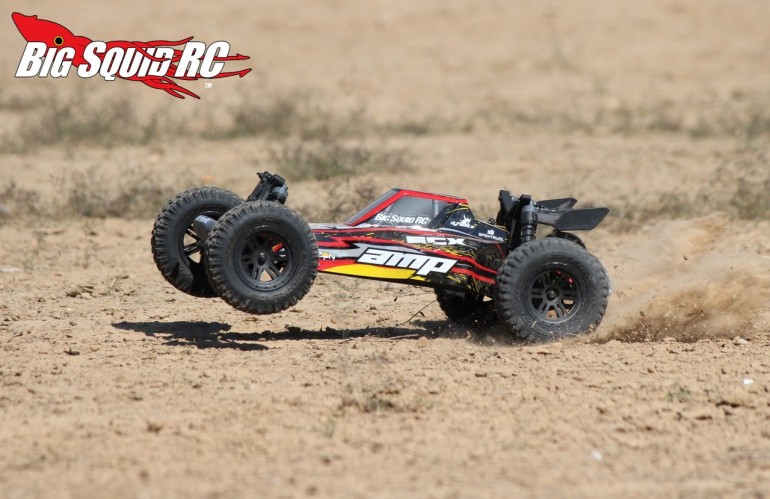 ECX RC is well known among bashers for having affordable yet durable vehicles. Recently EXC announced a new AMP series intended to bring ECX quality to an even lower price point. At a paltry $129, just how good can they be? We’ve been bashing the daylights out of the AMP Desert Buggy to find out. You know the drill, keep reading below to find out the real scoop…

Build Quality: We found everything to be well built with the exception of the shocks. None of the shocks were filled completely and all four felt like they had been filled to different levels.

Note: The ECX AMP Desert Buggy is not meant to run on a LiPo battery. It does not have a Low Voltage Cutoff built into the ESC which could lead you to discharge the battery too far. We try to be as responsible as possible when bending the rules like this.

Set-up Notes: Per the norm, we ran the buggy box stock. About half our driving was on the included NiMH pack, while the other half was on a 2S Kinexsis 4100mAh LiPo. We skipped using the included charger in favor of an iCharger 308.

Turning: The Desert Buggy is like a tale of two cities. On high bite surfaces like pavement, it tends to push a lot. Its servo comes across as not having enough torque, then combine that with a weak servo saver, it makes for a heck of a push when trying to turn. However, put the Desert Buggy on dirt and it is a completely different animal. On loose/loamy dirt the front tires seem to dig right in and the buggy turns quite predictably, with very little understeer.

Jumping: While there isn’t much power on tap to help bring the nose up during endos, the extra weight of the larger sized tires help to make mid-air corrections a breeze. Take offs and landings can be a bit squirrely thanks to no foam in the tires, but it jumped much better than we expected.

Bumps/Whoops: Hitting a whoop section can get real interesting in a hurry with the Desert Buggy. The underfilled shocks and foamless tires tend to make the buggy pogo when taking bumps at speed.

On-Road: Because of the buggy pushing in the corners and its lack of crazy power, the Desert Buggy isn’t the best on-road vehicle in the world. Yes, it can be driven on-road, and if you are a noob there is enough yank to keep it interesting, but if you are a seasoned driver you’ll be wanting to at least pop in a LiPo to get the speeds up a bit.

Grass: For a 2wd machine the Desert Buggy gets around amazingly well in shorter grass, perhaps better than any other buggy in its class that we have tested. The stock tires are great in grass, not only because of their tread pattern but also because of their extra size. No, the buggy can not get around in grass as well as a typical 4wd, but it does a great job for the type of vehicle that it is.

Tires: Ok, so the stock tires do not come with foams, which is normally the kiss of death for performance. Despite not having any foams, we absolutely loved the tires and can’t wait to try them with some actual foam in them. The tread pattern works exceptionally well on loose dirt and grass, giving the buggy loads of side-bite with plenty of forward traction. Seriously, the included Speedtreads might be some of the best basher RTR tires we’ve ever tested.

Power: Soft, soft, and soft, but pretty typical for a brushed RTR powerplant. The low-end is extremely manageable, it rolls smoothly through the mid-range, then runs out of breathe early up on top (20 mph w/ stock pack). Of course that isn’t a bad thing for a noob, it makes the buggy very easy to learn to drive with, but for all you guys with plenty of experience you’ll want more power from the very start.

Radio: So… the included transmitter is a pretty strange looking unit. It doesn’t look hobby grade and we were not fans of its ergonomics. The transmitter is physically small and not very appealing to the eye. We did experience a few glitches while driving it, but its range was solid when we stepped off a 290 foot radius.

Broken Parts: At first we were quite weary of hard bashing such an inexpensive vehicle, but that didn’t last long as the bash crew decided it was time to turn up the intensity early during the review. To boil it down, we pretty much drove the Desert Buggy like we stole it from the very first pack. We were extremely impressed with how the Desert Buggy held up. While its low top speed saves it from breaking in certain circumstances, we gave the Desert Buggy an EPIC beating and only ripped one shock shaft out of it rod end. Btw, it took a WFO head-on collision with a brushless short course truck doing 35 mph to break the ECX. And… the collision that barely did anything to the Desert Buggy lead to some major carnage to the truck it hit.

While the Desert Buggy won’t wheelie on command with the included pack, it was quite easy to do with the aftermarket Kinexsis LiPo. The LiPo also make it easy to pull backflips off a ramp too.

While the ECX comes with bearings, they are extremely sloppy. In fact, there is more slop in the bearings than there is in the plastic molded pieces.

It is super easy to turn down the throttle for noob drivers. Simply flip up the smoked cover on the transmitter then turn the throttle D/R knob down as far as you need to. It takes literally a second to turn the speed way down and to turn it back to full speed again.

We are not fans of the new style manuals that Horizon has been putting in some of their products. The ECX comes with two giant pieces of paper that make it difficult to find what you need in a hurry. And on top of that, there is no exploded parts view at all.

The AMP comes with a 2-N-1 ESC/receiver unit. This means it is a bit more of pain (and $$$) to simply switch to another radio or speedo. Our test unit seemed to work well enough and the servo is a three wire unit, but still we would rather have seen separate electronics.

After a long hard run we shot the motor at 100 degrees Fahrenheit, which is quite low. This means you should be able to add a couple teeth to the stock motor to get a bit more power without having to worry about overheating. Btw, the receiver/speedo was also quite cool when we temp’ed it.

While the speedo is quite smooth in forward, it is like a light switch when you hit the brakes. Even a small input to brake typically locks up the rear tires.

Best Mod Under $5: The best cheap mod is to simply grab some 30 weight shock oil and make sure all four shocks are properly filled.

Best Mod Over $5: A higher output battery makes the buggy much snappier from a dead stop while adding a few mph up on top.

Time To Bash: B While the included charger is quite slow (200mA, 9V), it is relatively fast and easy to get the Desert Buggy up and bashing.

Workability: B The layout on the ECX is easy enough to work on, but hex hardware would have really been preferred over Phillips.

Car Show Rating: B Love it or hate it, most of our testers really liked the aggressive body and large tires. Racer types didn’t think the big tires went very well on a 10th scale buggy, but our hardcore bashers thought it looked great.

Bash-A-Bility: A The AMP Desert Buggy turned out to be a beast taking one of the worst beatings we’ve put out in a very long time with nearly no breakage.

Fun Factor: A While there isn’t a whole lot of power on tap, the ability to drive a car like you stole it without having to worry about breakage made the Desert Buggy an absolute blast to drive.

Handling: C A slight push on high bite surfaces and some bounce from the foamless tires drop the Desert Buggy’s score in this category.

Value: A With a rock bottom $129 price point and a chassis that craves hard driving, the Desert Buggy is well worth every penny.

Parts Availability: C After checking the official Horizon website it already shows a bunch of parts in stock for the AMP. You won’t find many parts at local hobby shops, but so far it looks like they’ll be easily acquired on-line.

BigSquid Rating: B Honestly, the AMP Desert Buggy far exceeded what we thought was possible from the $129 price point. It bashes like champ, chews through grass like no 2wd 10th scale buggy before it, and is a great first time machine for a noob. Better still, it makes for a nice additional to the rc garage for a seasoned hobbyist just looking for a buggy to beat on that won’t break. We are huge fans of the ECX AMP Desert Buggy and can highly recommend that you pick one up.