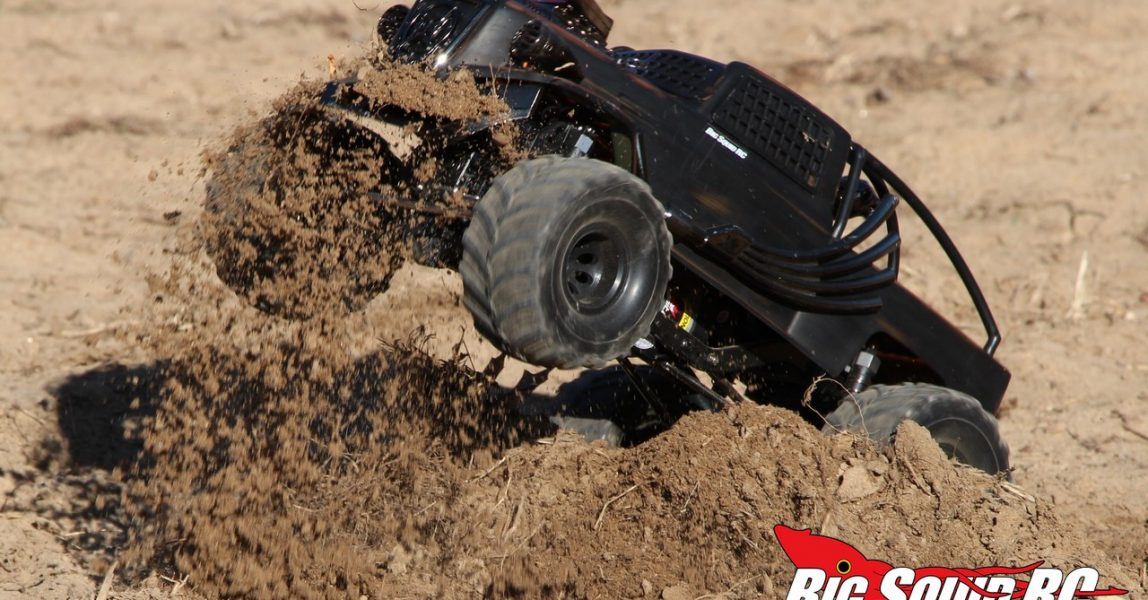 When ECX announced the Barrage Doomsday from Horizon Hobby our mouths dropped! We had never seen a vehicle quite like it before. Part monster truck, part crawler, and sporting a hefty dose of Mad Max, the Doomsday is one of the most unique looking trucks to hit the market in a long time.

Over the last few months we’ve been beating on a Doomsday to see how well it would hold up. Keep reading below to get the whole scoop…

Primary Competition: We would put the ECX into the 1/12th crawler market. There aren’t a ton of smaller scaled vehicles on the market, but there are a few like the Thunder Tiger Toyota Hilux.

What’s Needed To Complete: Zero, nada, the Doomsday comes with everything needed to run inside the box.

Build Quality: After giving the truck a good look over, we found nothing wrong but a couple of shocks slightly under-filled on oil. Otherwise, the gear mesh was good, the wheels were tight, etc.

Test Venues: We tested the ECX at three different city parks in the STL metro area. All the parks had nice grass areas, plenty of rocks, along with plenty of sand.

Set-up Notes: We didn’t change anything from stock for our review. We ran the stock battery, but skipped the included charger in favor of a Dynamite Passport Duo.

Turning: We found the Doomsday did a good enough job of turning. Its servo didn’t have a ton of power, but enough to get the job done for bashing purposes. In rocks the Doomsday generally didn’t have an issue picking a proper line, while out in the dirt it seemed to steer capably enough.

Jumping: The good news? The Doomsday jumps just fine. The bad? It doesn’t really have enough speed to get any air time. The Doomsday is geared like a crawler, not a monster truck, so don’t expect to launch off of anything. Yes, we were able to get a few inches of air here and there, and when we did the truck landed fine, just don’t expect much jumping from the Doomsday.

Bumps/Whoops: With a top speed under 10 mph, the truck just didn’t have enough speed to get very far out of shape when hitting bumps. Cruising through a gravel parking lot revealed it was over damped on both the compression and rebound side, so it tended to bounce more than anticipated over small bumps.

On-Road: We didn’t do a whole lot of on-road driving with our test truck, but what we did, it drove just fine. With a low top speed, you can tell the Doomsday was designed for gnarly terrain, not pavement.

Grass: The Doomsday was a beast in grass, at least for a 1/12th scaled vehicle. Its fully locked 4wd and monster truck style tires did a fine job of propelling the truck through short to moderate height grass.

Tires: We liked the stock chevron style tires. They were an important part of giving the truck its distinctive look, and they worked well for us in grass, dirt, and sand. If you decide to rock crawl the Doomsday, you will want to change tires first, the chevrons do not work well for crawling.

Power: Uh ya. So while the Doomsday says “monster truck” all day long on the outside, its power system says “let’s go rock crawling instead”. The stock power system is perfectly suited to a rock crawler. It has buttery smooth power and tops out at 8 mph. The problem is the Doomsday appears to be a monster truck. When you try to drive it like a monster truck it is geared way too low, when you try to crawl with it the tires and bumpers really hold it back.

Radio: We were fans of the included ECX 2.4GHz transmitter. It has a rubber covered wheel, it has a serrated trigger, and we never experienced a glitch with it. As far as RTR radios go, it worked well for us.

Broken Parts: During our normal bashing period we were unable to break the Doomsday. We attempted to break the drive-line by binding the truck up in rocks and could not break anything. We jumped it as hard as we could, we tumbled it down hills, and it held up like a champ. To finally break the truck we had to get stupid and launch it off a Johnny-On-The-Spot. Even then it took two attempts to actually break something. In the end we were able to break the rear axle housing where the upper two links attach. Needless to say, the Doomsday was quite bulletproof for us during normal driving, it should be quite tough for you as well.

The Doomsday just looks bad ass, have we mentioned that yet? From the first time we saw it during the press release, to sitting on our desk today, ECX knocked it out of the park with its looks. It looks tough, it looks gnarly, it looks monster jam, yet it still looks Mad Max.

OK, so we just ranted on how cool it looked, but we have to mention all of its detailing. How about that skull swinging on the rear roll cage? How about that blower bulging out of its hood? How about that distressed paint job? The LED lighting? The side window nets? The massive side pipes? Wow, just wow!

Does that big cowcatcher style front bumper always get in the way? No, not really. Yes, we noticed it on a few occasions, but mostly we noticed it more for not getting in the way when we expected it to.

And that big rear aluminum bumper, how about it? Yes, it does tend to hang up when rock crawling. One of the first things that we can advise to new Doomsday owners is to spin and flip that rear bumper around so it catches less while driving (and we think it looks better that way).

Best Mod: Ya know, the “best mod” category doesn’t mean much on some trucks, but it does for the Doomsday. You see, the Doomsday is a conflicted truck. To help its identity crisis, we Very Highly Recommend going to a larger pinion, or otherwise making changes for more speed. We didn’t try it in-house, but if you can just gear it for another 5-10 mph it turns a truck that isn’t good at crawling or monster trucking into a truck that should make for an excellent scale monster truck. Seriously, a $5 pinion can instantly turn the Doomsday into the truck it should have been out of the box.

Time To Bash: A It didn’t take long to take the truck from the box to the backyard. Making it ultra-easy to get going is the fact that everything needed to drive comes right in the box.

Workability: C While the Doomsday has a lot of space to spin wrenches, we would rather have seen hex hardware instead of Phillips.

Car Show Rating: A/HOF What does a “A/HOF” mean? Well, the HOF means Hall Of Fame. The Doomsday is something special as far as looks go. Not only is it one of the toughest looking trucks we can remember, but it is incredibly well detailed as well. On top of that, it is an original design, meaning it isn’t a copy of a Ford, Chevy, etc. But wait, there’s more! Then you throw in a perfectly well suited wheel/tire combo and a realistic style chassis/suspension, and you have a truck that deserves to be in the looks hall of fame.

Bash-A-Bility: A We were not able to break the Doomsday during our normal testing.

Fun Factor: C Is it a crawler or is it a monster truck? The power system and gearing are perfectly suited to crawling, while it outside appearance is monster style. The truck doesn’t crawl very well thanks to its tires and bumpers, but it also doesn’t monster truck very well because it is too slow.

Handling: B We found the Doomsday handled well for general bashing.

Value: B One of the gnarliest looking trucks ever for $199? Sign us up.

Parts Availability: C After scouring the web and our local hobby shops, we found parts readily available on-line, but not so much locally.

BigSquid Rating: B Yes, we had a lot of fun with the ECX Doomsday during our review, but wish the truck was geared just a bit taller. Sporting one of the toughest looking body’s ever, we found the Doomsday quite durable and had fun exploring our local parks with it.

Enjoy the video below